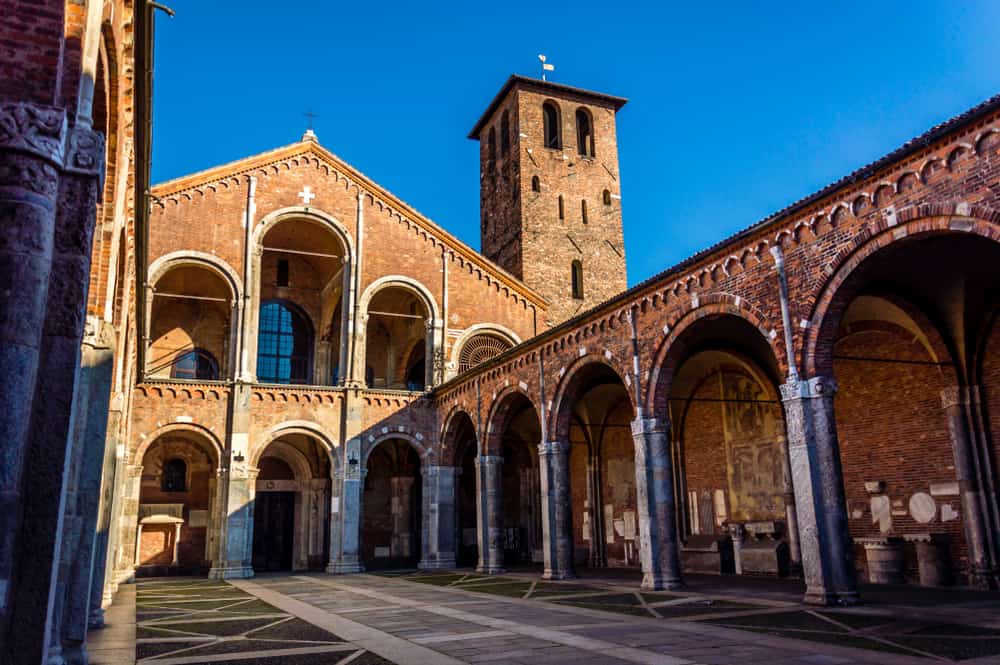 This Milanese church in Rococo style is a gem you must take the time to visit when exploring Milan. San Bernardino alle Ossa is known for hosting a small chapel decorated with human skulls and bones that come directly from the adjacent cemetery after it ra out of burial space back in 1210. Visitor will only be able to admire the reconstructed chapel, since the original church was destroyed in a fire in 1712. However, its impressive atmosphere remains and the ossuary, which had always attracted curious and visitors, can still be discovered today. The ossuary is also known for the vaulted ceiling decorated with vivid frescoes.

A unique place you should explore in Milan is this bizarre shop nobody would expect to run into right in the center of Milan. When it comes to Antichi Vizi, it can be reductive to define it as just an antique’s store. It’s a intriguing series of collections, a museum of the unexpected… and more. Here, you will be able to discover skulls, paintings and sculptures, watches and clocks, curious, stuffed wild animals, and much, much more! (12 Via dell’Orso).

Locally known as GAM (Galleria d’Arte Moderna), this fantastic collection features the most impressive art exhibition from the 19th and 20th centuries in Milan. Works of art come from all over Europe, some of them Neoclassic, Romantic, or belonging to the Liberty movement, among others. Although it’s impossible to deny the enormous artistic value of the masterpieces exhibited in the gallery, it’s also worth noticing the building where it is houses. The magnificent Villa Reale is located right opposite the Public Gardens of Milan. (Via Palestro 16)

Proud to have been named the world’s smallest bar, this extravagant hideaways is a must-see gem in Milan. Everything goes on in the scarce 4 square meters of this obscure and even grotesque wooden bar where guests are expected to book a 2-hour slot at a time. Clients find themselves safe and hidden from the noise and the bustle of Milan’s nightlife… only if they have the right key and password they will be required to enter the venue. Another possibility to enjoy the place is to buy your drink a mini slot window to take away. (Ripa di Porta Ticinese 43)

See also
10 of the Best Historical Sites in Rome to Put on Your Rome Bucket List!

One of the most extravagant and weird places to see in Milan is the unique Albergo Diurno Venezia, a place that, for decades, took care of the looks of the Milanese and foreign travelers in town. The underground public baths date back to 1926 the complex was a sort of old-day spa, also featuring business rooms and travel agencies as well as luggage storage rooms and a bicycle garage. Diurno Venezia used to work every day from early in the morning until late at night. The two most important areas of the building were the public baths and the hall of the artisans. The first area featured six luxury bathrooms with tubs as well as simple showers, while on the main hall, instead, there were barbers as well as manicurists and pedicurists offering their services. The baths only closed their doors in 1985 and it now opens once a month to the public with guided tours and other artistic events. (Piazza Oberdan)

Home to everything funky, vintage, and unique, Milan’s East Market is one more hidden gem you should explore in this Italian city. This market place is not just a cute vintage market where to spot unique pieces of garment, ancient leather bags, and retro bijoux, it’s also a place where locals love to hang out while on the hunt for a bargain. There are about 300 different stands where you will find clothes, sunglasses, furniture and even vintage branded bags sold either by privates and professional collectors. There’s also a food area where trucks and stands sell regular sandwiches but also vegetarian dishes, pasta, wine and cocktails. The market has a flexible schedule while the location is not always the same, it’s a great idea to follow their Facebook page for frequent updates.

Milan is well known for the aperitivo tradition about which I’ve already written in the blog several times. There are plenty of outstanding aperitivo places all over the city. Yet, you can experience the utmost aperitivo ritual in this the heart of Milan. Camparino in Galleria is an iconic Milanese landmark featuring a complex mix between the old and the modern times. As they like to define themselves, Camparino in Galleria is the symbol of the Milanese Aperitivo. When you visit don’t miss the Camparino Boutique, the food pairing experience. (Piazza Duomo 21).

The underground alleys of Sforza Castle

Although it might sound even more mysterious to define them as dungeons, these underground passages below the ground of the Sforza Castle where, as a matter of fact, a network of hidden passages with defensive purposes more than functioning as prisons. These underground itinerary turns and twists all the way below Sempione Part to reach the farther Milanese countryside. This engineering system involves a series of passages, towers, and hidden tunnels where you could easily find soldiers, nobles, and even villagers escaping from warriors and foreign invaders.

This museum is in the former house where Gian Giacomo Poldi Pezzoli used to live (1822-1879). Poldi Pezzoli is considered to have been one of the most refined Italian art collectors with a passion for ancient weapons as well as for the Renaissance period. The collection includes paintings he himself brought from other European countries, as well as masterpieces made by artists such as Botticelli, Bellini, and more. Although he died at young age, the extravagant collector had early on decided that his home would become an artistic foundation for the public sharing the same rules and regulations as the Brera Art Gallery. Despite his noble intents, the mansion was destroyed during the World War II, with only a few parts of it remaining untouched. Most of the rooms and spaces were restored and adapted to host the rich collection of paintings which fortunately didn’t suffer any damage.

We’ve often discussed the magnificent Last Supper fresco which you can visit in the Refectory of Santa Maria delle Grazie adjacent convent in Milan. However there’s one more hidden gem worth discovering in the area. It’s known s the House of the Atellani, an aristocratic residency from the fifteenth century which hosts a secret vineyard that Federico il Moro donated to Leonardo Da Vinci while the artist live in the city as he was creating the worldwide famous fresco.

This special road in the center of city is surrounded by a unique, mysterious atmosphere that puts it directly in this list of top gems to see in Milan. Via Bagnera is a small alley often considered the spookiest area in the city. The legend makes reference to Antonio Boggia who has the obscure privilege of being Milan’s first serial killer. The murdered used to hide the bodies of his victims in the cellars of his house, however, he was discovered and sent to trial once one of his victims managed to escape. The tranquil alley is now the theater of different tours that portray the most mysterious areas of Milan, which, the same as London or Paris, has its own uncanny street to visit.

Although this places remains mostly unknown to the general public, hundreds of Milanese students visit the premises everyday. As a matter of fact, the main branch of the University of Milan is in a large hospital originally constructed by Francesco Sforza. Known by the name of Ca’ Grande Historic Archive, the complex also houses catacombs and a burial ground from the fifteenth century.

Simply known as Shelter 87, this underground bunker was built back in 1940 and it was the 87th out of over 135 air-raid shelters constructed in Milan during the Second World War. This particular horseshoe-shaped space standing under a primary school on Bodio Street, has two separate areas, one of them accessible to the public, while a second part used to function as a school

There’s a different side to Milan not accessible to everyone and about which most locals are not even aware of. It’s the hidden side of the city, the underground ancient roads, buildings, monuments, and sculptures dating back to a plethora of different eras and times, that literally represent the different layers of history from Ancient times until today.

Just meters away but incredibly far from the sounds and experiences of modern Milan, it’s possible to step down into a world of mysterious stories and spaces, oftentimes overlooked by regular tour experiences. There are several different underground spots to check, one of the most impressive ones being right under the Duomo Square you can admire the ruins of the Baptistery of San Giovanni alle Fonti, a religious building from the fourth century AD. The baptistery was discovered in the 60s when the city started the construction of its subway network. (It’s possible to access the area from the Cathedral itself)

Art Deco, Art Nouveau, and Liberty, are some of the most characteristic architectonic styles you’re bound to encounter in the Milanese landscape if you just pay the right attention. One of the most beautiful expressions of the Liberty movement can be found in the mansion known as the Residenza Vignale. The remarkable villa was built for an Austrian sovereign at the beginning of the twentieth century. The villa stands not only for the luxurious rooms and inner spaces, but also for the impressive internal garden and the stables. (Via Toti)

Literary cafe and bohemian refuge, Colibri Caffe Literario is a fantastic spot for book lovers, art fans, and those who adore a good cup of coffee with a great book by their side.

The bright spaces, decorated with comfortable leather sofas, mirrors, and where plenty of books can be found no matter what direction you’re looking at, is a hidden gem you should definitely visit when visiting Milan. If still in doubt why to visit, check their website or follow them on Instagram.

If you’re into eclectic art and unique architecture, Palazzo Berri Meregalli can offer a good dose of that, and much more. The building dates back to 1913 and it occupies and imposing corner on Via Cappuccini. Among the stunning features that the weird facade hides, curious and attentive watches will be able to spot gargoyles and cherubim, mosaics, nude bricks, wrought iron, and more. An interesting mixture of Baroque excess and Liberty gusto, the building also features, sculptures of Renaissance style and colorful frescoes .

See also
24 Hours in Naples: The Perfect One Day in Naples Itinerary + Ideas for 2 Days!

Usually known as the Gate to Hell, this column is located near Piazza Sant’ Ambrogio, just steps from the famous old church in Milan. This column built in Corinthian style dates back as far as the second century, taken to Saint Ambrose Square by unknown hands, the column is made of clear marble and it was named after the legendary battle that Milan’s favorite saint, Sant’Ambrogio is said to have fought against the devil. The most curious feature and what probably also gave the name to the column is the two holes at its base. According to the myth, when Saint Ambrose tried to defend himself by pushing the Devil against the column, the beast’s horn got stuck in the marble leaving the famous holes you can still see today.