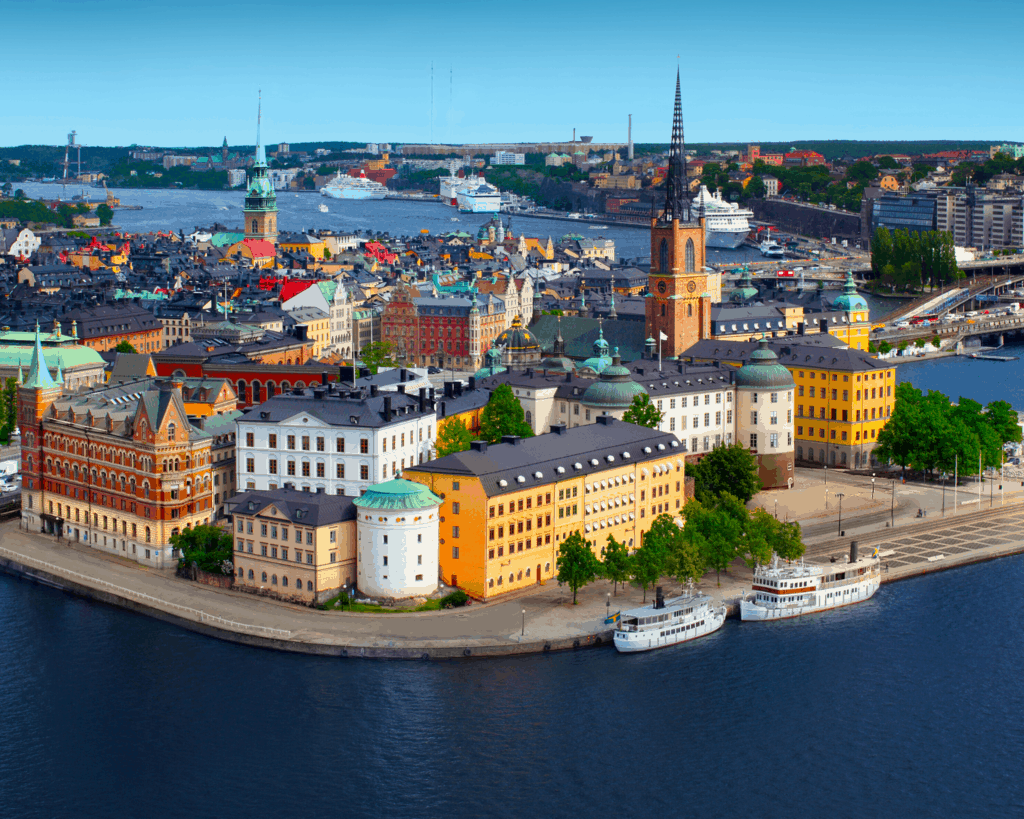 Stockholm is one of the most beautiful and photogenic cities in Europe. Stockholm has something for everyone, from its picturesque old town to its trendy neighborhoods and incredible views. If you only have 2 days in Stockholm, here’s how to make the most of it!

An Introduction to Stockholm

Located on the east coast of Sweden, Stockholm consists of over 24,000 islands known as the Stockholm Archipelago.

The city’s central sections sit on just 14 of these islands, which are connected by 57 bridges.

Technically, the city’s geographical center is in Riddarfjärden Bay, on the water itself.

If this isn’t unique enough, around 60% of the city consists of waterways, parks, and green spaces.

The municipality of Stockholm is home to more than 975,000 people, making it the most densely populated city in Sweden.

With 1.6 million people living in the urban area and 2.4 million in the metropolitan area, it shouldn’t be surprising that Stockholm is Sweden’s cultural, economic, media, and political center.

The name of Stockholm appears in history as early as 1252. The city’s Old Town, a popular spot to visit, was built on the central island beginning in the mid-13th century, but many of its buildings date to the 1700s and 1800s.

It is a sought-after area to live in these days and is full of cobblestone streets, cafes, restaurants, tourist shops, galleries, museums, studios, and the Royal Palace. But, more on that later.

Stockholm truly is one of the best cities to visit in Europe!

Why Stockholm is Different

If you plan to visit Stockholm, be aware that it is nearly a cashless society. So you can convert your money upon arrival, but there’s no guarantee that the places you visit will accept it and that you’ll be safe with card or mobile payments.

You also likely won’t have any trouble with communication in Stockholm as Sweden itself values teaching English in school. Therefore many, if not most, Swedes speak excellent English and will be able to help you with questions or directions. It’s often said that it’s challenging to learn Swedish upon moving to Sweden as many residents speak English.

You won’t have to worry about getting around between islands in Stockholm, as their public transit also travels waterways. Speaking of waterways, their water is known to be clean enough to swim in it, fish in it, or even drink it.

Many museums have free admission! Beginning in 2016, state museums converted to free admission. At times, particular exhibits may have entrance fees for adults, but you can check into that before visiting.

The only places to purchase alcohol in Stockholm are at a dining establishment or a Systembolaget. You’ll know the Systembolaget when you see it as it only sells alcohol. Be aware that alcohol in Sweden comes with a hefty price tag.

Every day, Swedes enjoy Fika, which is a mental break combined with coffee (or another beverage, as taken by the contemporary and generalized meaning of the word) and tasty pastries. Be sure to enjoy Fika with friends, old or new!

How to Get to Stockholm

Taking the Train to Stockholm

If you are staying in Copenhagen or Oslo, a train ride to Stockholm should take around five hours.

Many of the best options for traveling to Stockholm by train will also involve flying.

Arguably the fastest and easiest way to arrive in Stockholm, flying shouldn’t be difficult with four different airports serving the city.

Not all the airports bring you right into the city’s heart, but they are all connected to the city center by airport coaches or other municipal alternatives.

Be aware that taxi services in Stockholm are not regulated, so prices may vary widely and be quite pricey. But, the local transit is reliable and easy to use and will get you into the city in less than an hour, and Uber is also an option.

5 Dishes to Eat in Stockholm

Quite a few dishes are specific to Sweden. Here are a few options to be sure and try while you are visiting Stockholm to get a truly rounded experience.

Brown baked beans with pork: A sweet and sour classic lunch dish. Apparently, brown beans are so Swedish that the EU protects their denomination of origin. In order to use the protected title, the beans have to be grown on the island of Öland.

Falu sausage (falukorv): A traditional Swedish sausage. In its classic form, slits are cut in the link and then stuffed with cheese, mustard, onion, and tomato. It’s baked then served with potato mash. It’s filling and warming, for sure. This is another food item whose name is protected by the EU. Falu sausage is packed with flavor and is a great, warm option for a chilly night.

Meatballs (köttbullar): Likely made famous around the world by IKEA. These traditional Swedish meatballs are served with lingonberries, mashed potatoes, and creamy gravy.

Swedish Beef Stew (kalops): Reminiscent of the French bœuf bourguignon (but is, in fact, much older), this rich, slow-cooked stew of onion, beef, black pepper, and bay leaf is a common lunch option across Stockholm.

The Perfect 2 Days in Stockholm Itinerary

This 48 hours in Stockholm itinerary includes stops at some of the most famous landmarks in the city. It’s perfect for visitors seeing Stockholm for the first time.

Keep reading to find out what to add to your Stockholm bucket list.

Morning: Start the day in Old Town (Gamla Stan) and discover lots of history and culture.

Breakfast: If you need some nourishment to start the day, try Greasy Spoon or 6 Nytorget, which have locations not far from Old Town.

Stortorget is the main square, and everything you’ll want to see leads off from here. You could also choose to do a walking tour of Old Town and learn more about the local events in history from a guide.

Start at the Royal Palace (don’t miss the changing of the guards), Royal Chapel, and Royal Armory. This could take you through the morning and into the afternoon with lots to see!

Right down the street is the Storkyrkan (The Great Church), also called Sankt Nikolai Kyrka (Church of St. Nicholas) or Stockholms Domkyrka (Stockholm Cathedral). This was, for a time, the only parish church in Stockholm and is, therefore, the oldest church in Stockholm. Construction likely dates back to the 13th century.

Lunch: Stop for lunch at one of two restaurants which both serve Swedish cuisine: Stortorgskällaren or Österlånggatan 17.

Afternoon: Check out the nearby museums!

The Nobel Prize Museum will inspire you and give you hope for future generations as you learn about ideas that have changed and will change the world.

For more on the history of Stockholm, check out the Stockholm City Museum, which is just outside Old Town. Admission is free to this one, so it’s worth a stop!

Dinner: A few fantastic dinner options are nearby in Old Town. Fem Små Hus has been the site of a tavern or restaurant since 1694, so you know there’s a lot of history inside! You can also enjoy outdoor seating on one of the most popular pedestrian streets in Gamla Stan.

Since its opening in 1722, Den Gyldene Freden (The Golden Peace) has been known for serving traditional Nordic foods and Swedish flavors.

It may seem a tad unconventional, but Old Town is safe to wander in the evening, and there is still so much to see in one of the world’s best-preserved and largest medieval city centers.

Morning: Check out the Stockholm Archipelago with a guided cruise. This tour can also include lunch, but it’s a great way to see a lot of sights, have a delicious meal, and learn even more about Stockholm. Just be sure to sit inside if you want to hear the guide.

Afternoon: Time for the Vasa Museum and a tour of City Hall.

The Vasa Museum (Vasamuseet) is an incredible maritime museum that has the only nearly fully intact ship ever salvaged from the 17th-century on display. Even though the 64-gun warship Vasa sank in 1628 on her maiden voyage, this is still one of the most visited museums in the Nordic nations.

What to see in Stockholm in Two Days

With only 48 hours in Stockholm, it’s essential to narrow down what you want to see and plan from there. Here is an overview of the best things you can do in two days in Stockholm.

Home to three UNESCO World Heritage Sites, not to mention more than 70 museums (the most museums per capita than almost anywhere in the world), the largest hemispherical building in the world, an iconic city hall, and the world’s first national city park, Stockholm has a lot to see.

Top museums to visit include the Nobel Museum, the Stockholm City Museum, Vasa Museum, and the Royal Palace. These are just a few of the museums in the city, but they are the most visited and most popular for visitors.

Old Town includes a few of these museums and has a lot of history to explore. Even if history isn’t your cup of tea, the culture is abundant and evident along the streets of Gamla Stan.

The world’s largest spherical building, the Ericsson Globe, will give you a trip to the top of Stockholm. You can ride a glass gondola and experience fantastic views of the city. It’s truly a unique experience.

A guided tour of the Stockholm City Hall is another great option. It’s one of the most famous buildings in Sweden, and it’s also the venue for the Nobel Prize Banquet held each year.

Seeing at least part of the archipelago is also a great way to see Stockholm. Whether you take a guided tour and get beautiful glances at the islands or if you decide to spend a day touring them directly, you won’t be sad you did. You can take a private sailing tour, a guided kayak trip, or use the public ferries to get around.

What to Do if You Only Have One Day in Stockholm?

Option 2: Go museum hopping. Try out the Royal Palace, the Stockholm City Museum, the Nobel Museum, and the Vasa Museum. You’ll get a lot of history and culture.

What to Do if You Have Three Days in Stockholm?

If you have the opportunity to add another day to your visit to Stockholm, here are a few places to add to your itinerary:

Walk from Old Town to Kungliga Djurgården. A beautiful walk by the water and on trails around the area is a great way to spend part of your day in Stockholm.

Once you’re on the island of Djurgården, you won’t want to miss visiting Skansen, the first open-air museum and zoo in Sweden. It’s a great option if you’re traveling with children.

Visit other islands of the archipelago. Many of them are connected either by bridge or are easy to access by ferry. Fjäderholmarna, Vaxholm, Grinda, and Svartsö are all great nearby options for experiencing the Stockholm culture outside the city or exploring nature.

Author Bio: Disha of Disha Discovers is just a small-town Mississippi girl who decided to escape the ordinary and live life without limits. She has traveled to over 80 countries, and her passion is to inspire others to go everywhere. She’s here to make your travel dreams come true!