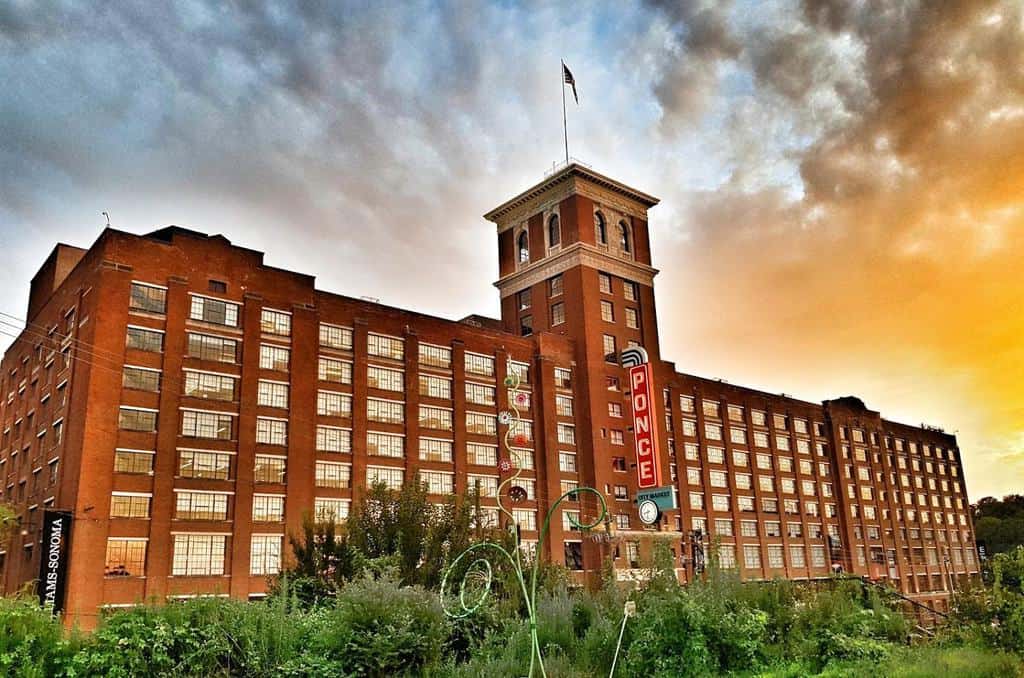 One of the fascinating things about the city of Atlanta, Georgia is how often it has had to change and adapt to forces around it. Sometimes it’s gone kicking and screaming, and sometimes it’s forged its own path. Because it’s arguably undergone more major cultural and economic changes than most American cities, it’s a great opportunity to study the evolution of American life. Specifically, we’re talking today about the Ponce City Market, formerly the Sears and Roebuck building, which is a great example of how business models come and go, how commerce affects cultural life, and how businesses can impact a city by investing in the structures they will eventually leave behind. My guest today is Caroline Eubanks, a freelance travel writer whose book This is My South comes out this fall. We chat about how Sears came to Atlanta in the 1920s and what legacy its building leaves behind.

Atlanta after the Civil War

As Caroline tells me, Atlanta has had a rocky relationship with its past. The city was notoriously burned during the Civil War, and then suffered another major fire in 1916. So when Sears & Roebuck came to town, their building was the first major structure in their chosen neighborhood. Atlanta has also not always appreciated its landmarks, tearing down many buildings that are just a few decades old to replace with new ones, so the fact that the Ponce City Market building is still around is remarkable. Atlanta was struggling for jobs after Reconstruction, so Sears coming to town in 1926 was a big deal.

[bctt tweet=”How Sears changed Atlant and the South, this week on the #HIstoryFanGirl #podcast. #HIstory” username=””]

What Sears meant to the South

The Sears business model of mail-order goods and home delivery was a huge boon to the South, where many rural communities couldn’t otherwise get access to many of the things Sears sold. So when the city was looking to attract businesses, an entrepreneur named Ivan Allen Sr. teamed up with the Chamber of Commerce and wooed Sears to Atlanta (along with another little-known company, General Motors). But the city Sears landed in was still struggling with the after-effects of the Civil War, with hard segregation between whites and blacks, race riots and more.

[bctt tweet=”With #Sears closing its doors, @thisismysouth talks about what it meant to #Atlanta for the mail-order giant to open its massive headquarters in the city. #HistoryFanGirl” username=””]

The decline of Sears

By the 1970s, Atlanta was experiencing what a lot of major urban areas in the U.S. saw happening: the rise of the suburbs and white flight. Where going into the city to shop at Sears was once a big part of life in the region, large shopping malls were opening in the ‘burbs, and the entire way people bought things shifted. Sears ended up closing its retail store in 1979, and then by 1987 the offices closed as well. The City of Atlanta purchased the two-million-square-foot building in 1990 to use for government offices, but they really only needed the first two floors. But then, in 2010, the city sold the building to a developer named Jamestown, who has developed huge complexes across the United States.

[bctt tweet=”A fascinating conversation about how business models come and go, how commerce shapes and is shaped by culture, and the recent history of the American South. This week on the #HIstoryFanGirl #podcast.” username=””]

See also
Explore Historic Denver: 9 Things to Do in Denver for History Lovers

The Rise of Ponce City Market

In 2013, Jamestown began developing the space and it opened a year later. Now it’s a thriving residential and commercial complex, including a world-class food hall. It’s transformed the neighborhood, of course, and it’s truly an example of what can happen if cities hold onto their landmarks and think creatively about how they can be used. And there’s more to see around the Market as well. As Caroline tells me, it’s important to check out Sweet Auburn, the area where many Civil Rights leaders grew up and came together to plan actions. This is a really fascinating chat about a place that doesn’t get a lot of attention from tourists, the American South, and I highly recommend checking out Caroline’s book when it publishes this fall.

[bctt tweet=”How one massive building shuttered, stuttered, and then became a central part of Atlanta’s civic life, on this week’s #HistoryFanGirl #podcast.” username=””]