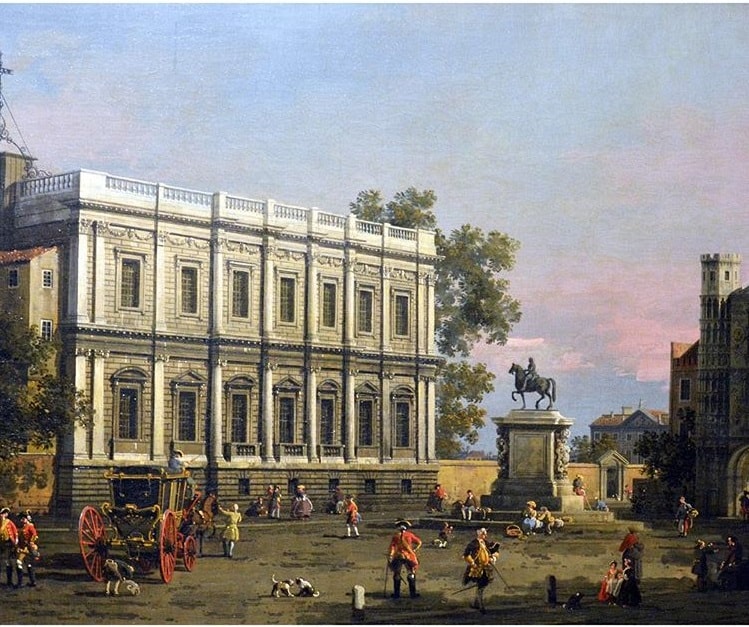 Listen to the Episode “Banqueting House: The Place to Kill a King”

Visiting London can be overwhelming, with the list of must-see locations stretching as high as Big Ben. But my guest today, author Leanda de Lisle, takes us deep into a lesser-known but historically vital London locale: Banqueting House. We talked about how Banqueting House fits into the rich history of London, its famous architect Inigo Jones, and the gorgeous painting by Flemish artist Peter Paul Rubens. And because Leanda is the author of the fantastic book, The White King: Charles I, Traitor, Murderer, Martyr, you know we had to talk about Banqueting House’s as an infamous historical site: the execution of Charles I.

[bctt tweet=”Banqueting House was built only a few years before Charles I would become king, and not long before he’d be beheaded in front of it. #historyfangirl” via=”no”]

The origin story of Banqueting House

Banqueting House in London is right in among many of the famous London landmarks but is easy to overlook. As Leanda told me, it was built by James I, father of Charles I, in 1619 because he needed a place to host and entertain ambassadors and foreign dignitaries. Charles I was only 19 years old at the time, but only a few years away from becoming king himself. Inigo Jones designed it in the Italian Palladian style, the first of its kind in England, with a striking appearance to greet visitors to England. The building was built of yellowish stone, through it was refaced in the 19th century with the gray stone visitors see today.

[bctt tweet=”In this week’s episode, I chat with @leandadelisle about Charles I and her brilliant book, The White King. #historyfangirl” via=”no”]

The Real Royalty of London

The construction of such an incredible building came at a fairly turbulent time for the Stuarts and Charles in particular. His mother had died in 1619, the same year Banqueting House was built, and not long after his brother had passed away. His sister had gone abroad to be married, so Charles was left alone in England. And there’s an odd dynamic with Charles’s father, James, having an intimate relationship with the Duke of Buckingham, and the duke trying to get in the good graces of Charles, the heir to the throne. Buckingham actually took on a mentor role for Charles, helping him as he transitioned to adulthood. And that friendship would become massively important when James died, and Charles took the throne. And given what was happening in England at the time, Charles would need to lean on that relationship heavily.

[bctt tweet=”.@LeandaDeLisle tells me how the enemies of Charles I redefined treason to ensure he wouldn’t win his trial. #historyfangirl” username=””]

The trial of Charles I

When Charles ascended to the throne, the Thirty Years War was already raging in Europe. As Leanda says in this episode, the war was really a fight between Catholicism and Protestantism, and the Protestants felt they were losing. Charles had some “quite conservative” ideas about how to reform the Church of England, with an emphasis on ritual. That, along with a testy relationship with his Parliament, set up the climate in which the country and its leaders were divided in their support of Charles, setting up a Civil War. Charles was eventually put on trial for treason—which was ironic at the time because technically treason could only be committed against the king—and as we know, found guilty and sentenced to death. Leanda sets the tragic scene for listeners; from Charles’s final meeting with his children to the walk to the scaffolding outside Banqueting House. It’s a dramatic story, and one you’ll want to hear from the woman who literally wrote the book about it.

[bctt tweet=”Want to know the scurrilous scuttlebutt from the reign of Charles I? Then you’ll want to listen to this episode. #historyfangirl” via=”no”]

Banqueting House: The setting for the high drama of Charles’s reign

Leanda is full of colorful stories about Charles I and the Stuart monarchy, and the dramatic end of Charles’s life. I asked her why she set out to write a book about Charles I, and you can hear her light up as she discusses the fascinating characters of the time. We talked about Charles’s wife, Henrietta Maria, the Duke of Buckingham and someone she refers to as “the frenemy from Hell.” (You’ll have to listen to find out who that is.) The backdrop to all of this, of course, is Banqueting Hall, an underrated tourist destination, but a spot of high drama in English history, which is, of course, saying something.

[bctt tweet=”Want to know who among Charles I’s friends @leandadelisle calls “the Frenemy from Hell”? Tune in to this week’s episode. #historyfangirl ” via=”no”]

By Thorvaldsson (Own work) [CC BY-SA 3.0 (https://creativecommons.org/licenses/by-sa/3.0) or GFDL (http://www.gnu.org/copyleft/fdl.html)], via Wikimedia Commons

2 thoughts on “Banqueting House: The Place to Kill a King”