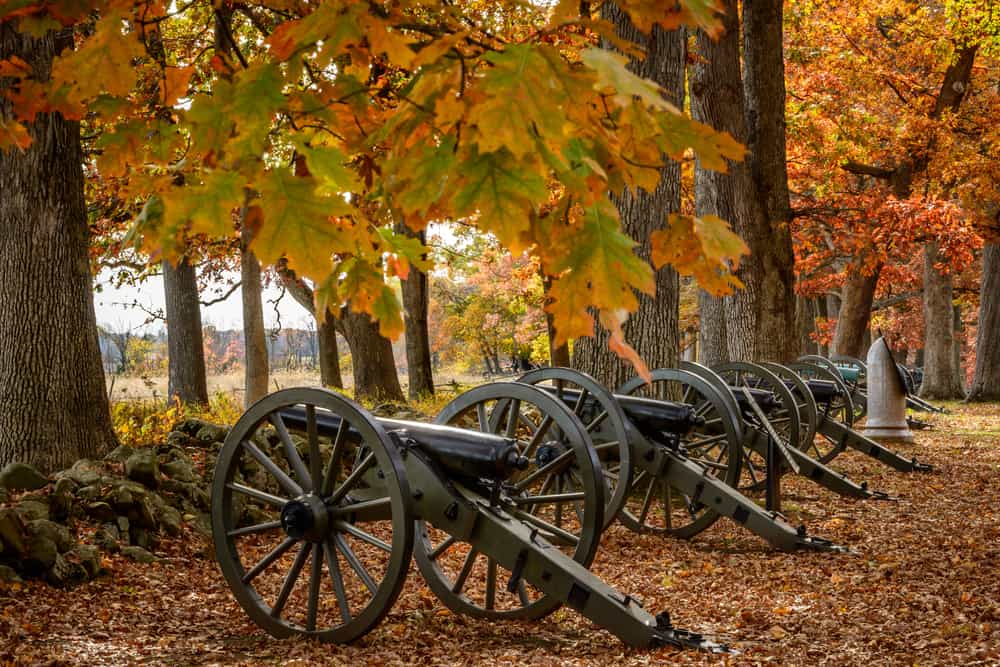 Looking for beautiful and thought-provoking quotes about Gettysburg?

Here are the best quotes about the Battle of Gettysburg disaster from historians, novelists, survivors, politicians, and pop culture that you can use on your website or your Instagram to help teach people about what happened.

Read next: 5 Books about Gettysburg to Inspire Your Civil War Travels

The Best Quotes about the Battle of Gettysburg

The world will little note, nor long remember what we say here, but it can never forget what they did here.

It is for us the living, rather, to be dedicated here to the unfinished work which they who fought here so nobly advanced. -Abraham Lincoln

I am tired of the sickening sight of the battlefield with its mangled corpses & poor suffering wounded. Victory has no charms for men when purchased at such cost. –Civil War General George McClelland

See also
15 Most Romantic Things to Do in San Francisco, California

Gettysburg. . . . You cant understand it. You would have to be born there. -William Faulkner

May we all, as a nation of believers, fight for the achievement of America; may we make sacrifices worthy of those proud men and women who fought for us, labored for us, bled soil from the beaches of Normandy to the fields of Gettysburg for us. -Cory Booker

We entered Gettysburg in the afternoon, just in time to meet the enemy entering the town, and in good season to drive him back before his getting a foothold. -John Buford

Pile the bodies high at Austerlitz and Waterloo. Shovel them under and let me work- I am the grass; I cover all. And pile them high at Gettysburg.

And pile them high at Ypres and Verdun. Shovel them under and let me work.

Two years, ten years, and passengers ask the conductor- What place is this? Where are we now? I am the grass. Let me work. -Carl Sandburg

You don’t go to Gettysburg with a shovel, you don’t take belt buckles off the Arizona. -Robert Ballard

Rations were scarcely issued, and the men about preparing supper, when rumors that the enemy had been encountered that day near Gettysburg absorbed every other interest, and very soon orders came to march forthwith to Gettysburg. -Joshua Chamberlain

If a picture is worth a thousand words, please paint me the Gettysburg Address. -Leo Rosten

If you look at photos of the Gettysburg Address there’s a guy off to the right who I think is Keith Richards. -Dave Barry

Well, it is all over now. The battle is lost, and many of us are prisoners, many are dead, many wounded, bleeding and dying.

Your Soldier lives and mourns and but for you, my darling, he would rather, a million times rather, be back there with his dead, to sleep for all time in an unknown grave. -George Pickett

We here highly resolve that these dead shall not have died in vain. -Abraham Lincoln

What began as a bitter dispute over Union and States’ Rights, ended as a struggle over the meaning of freedom in America.

At Gettysburg in 1863, Abraham Lincoln said perhaps more than he knew. The war was about a new birth of freedom. -Bruce Catton

The sinister nature of the American soil is apparent in places like Gettysburg. Fertilize it with the blood of heroes, and it brings forth a frozen-custard stand. -Russell Baker

It wasn’t by accident that the Gettysburg address was so short. -Ernest Hemingway

Few generals were as brilliant as Robert E. Lee and few battles as titanic — and puzzling — as Gettysburg. Why did Lee fail? -Jay Winik

The nation was founded and “dedicated,” to use Lincoln’s language in the “Gettysburg Address,” to equality as a “self-evident truth.”

But this very principle of equality, as Lincoln also noted, was a “proposition.” To make it a reality remained “the unfinished work” of Americans. -Ronald Takaki

I was shot in the right breast, the ball entering my lung, where it remains. Capt. Hobert, of my regiment, made a detail with himself to take me off the field.

They carried me over the pike, into a field near the old railroad grade, where they were compelled to surrender, and were taken prisoners to the rear, leaving me where you found me. -Colonel John B. Callis

I write simply a line to inform you of my condition. In an engagement Friday afternoon near Gettysburg, about 3 P.M. I received a wound in my left arm. -Lieutenant Colonel Benjamin Franklin Little

Learn More About the Battle of Gettysburg

Whether you’re planning to visit Gettysburg or simply interested in learning as much as you can from home, I have some resources to help you.

See also
The 17 National Parks in Washington State: How & Why to See Each One!

First, check out the best books about Gettysburg, including novels, nonfiction, and memoirs. You can also read how to do a self-guided driving tour of Gettysburg.

Before you leave for Pennsylvania make sure you have a valid Travel Insurance Policy because accidents happen on the road. I pay for World Nomads, and I happily recommend them.