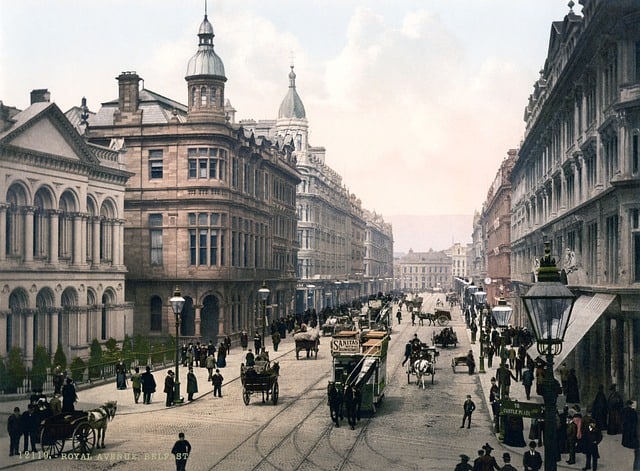 Belfast is many different things to many different people. It’s both the second-largest city on the island of Ireland and the capital of Northern Ireland. With Brexit looming, Belfast’s attachment to the United Kingdom grows ever more tenuous. But wasn’t that long ago that Belfast was wracked with sectarian violence rooted in class and religious divisions, known as the Troubles. April will mark the 20th anniversary of the Good Friday Agreement, which was the culmination of the peace process that ended the Troubles. My guest today is Fin Dwyer, the historian behind the Irish History Podcast. We discuss how Belfast and Northern Ireland became separated from the rest of the island, and the underlying tensions that sparked the violence.

[bctt tweet=”This week, I talk with Fin Dwyer of the @irishhistory podcast about #Belfast and the Troubles. #HistoryFangirl” via=”no”]

The Early Days of Belfast

What’s interesting about Belfast is that despite its prominence in modern history, it was actually fairly late to come together. As Fin told me, a lot of Irish cities were founded in the Middle Ages, but because the Gaelic tribes were stronger in the area at the time. Dublin, for instance, was founded in 841, whereas it wasn’t until the 17th century that Belfast settled. The Gaelic families of Ulster began to falter, and the Scottish and the English began to settle there. And Belfast began to emerge as the leading industrial center in Ireland, particularly in the 19th century, before the Irish famine.

[bctt tweet=”#Belfast is a latecomer among Irish cities, not being officially settled centuries after Dublin. #HistoryFangirl” via=”no”]

[bctt tweet=”While the Troubles are often blamed on religious differences, @irishhistory tells me class may be an even more important factor. #HistoryFangirl” via=”no”]

The Separation of Ireland and Northern Ireland

A historian’s hindsight is a valuable thing, and we can say now that the British Empire’s reaction to the potato famine, which ended in the middle of the 19th century, inevitably led to Ireland independence. But at the time not everyone was convinced. Through the late 19th century, the movement for independence gained momentum, but so did the “unionist” or “loyalist” movement, which argued for Ireland staying with the British Empire. By the time the 20th century came around, tensions came to a boil. World War I exacerbated the issue, with those seeking an independent Ireland arguing that the war was a British one, not an Irish one, while the loyalists arguing for Ireland’s involvement. And then in 1916, Irish Republicans launch a rebellion in Dublin, which leads to a vicious response from the British military, radicalizing both sides. This leads directly to the partition of Ireland in 1920.

[bctt tweet=”The partition of Northern Ireland remains one of the most controversial border decisions in the world. I talk this week with @irishhistory about what went into the agreement. #HistoryFangirl” via=”no”]

Bloody Sunday and Beyond

People outside of Europe may know some of the more prominent terms to arise out of the violence: Bloody Sunday, the IRA, etc. But as Fin tells me in this episode, the conflict was actually deeply rooted in the history of the British Empire, and in both the religious and class divisions in the country. The violence may have been called “The Troubles,” but it was much worse than that: Death squads, massacres and hunger strikes. And Fin pulls back and looks at the larger picture, how the Troubles fit into a time of turmoil, including struggles in Latin America and Palestine. If you’re curious about recent European history, and history as it’s being lived today, you need to listen to this episode about Belfast and the Troubles.

[bctt tweet=”#Belfast today is a wonderful place to visit, but its history of division is still felt every day. #HistoryFangirl” username=””]

See also
Dublin or Belfast: Which Emerald Isle City is Right for You?