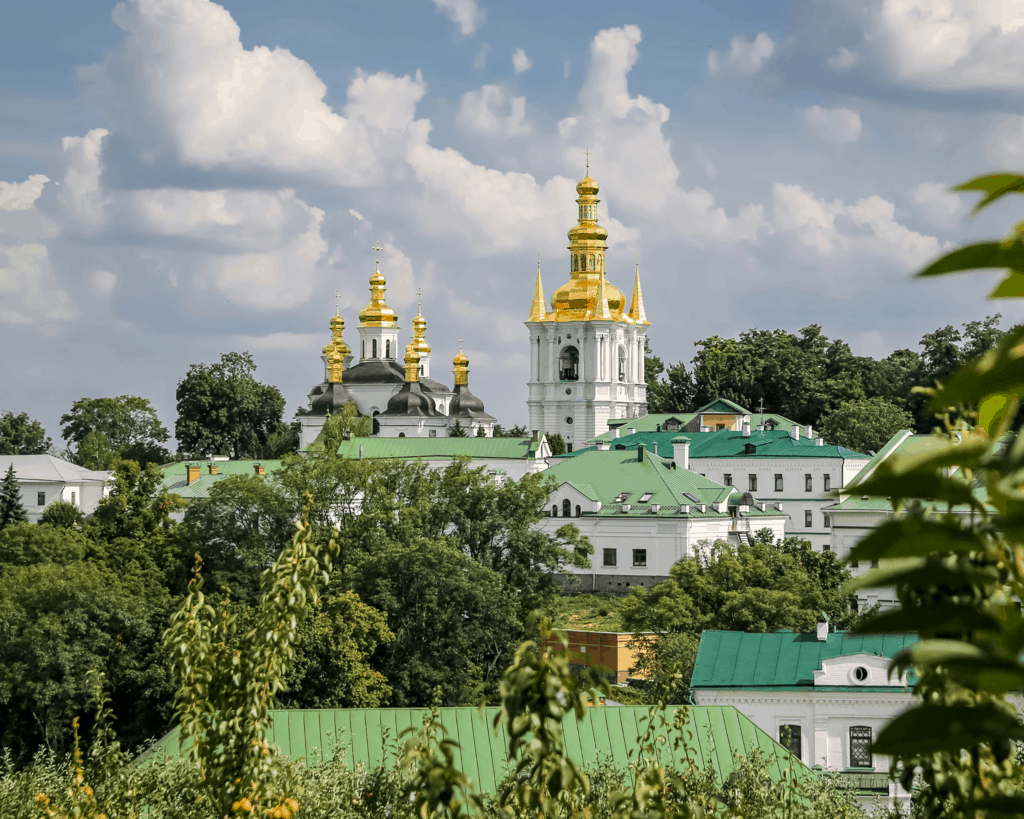 Also known as The Monastery of the Caves, Perchersk Lavra is one of the most important historical and religious landmarks throughout the Slavic Region and the most significant tourist attraction in Ukraine. The complex of churches and caves finds its origins in the 11th century and quickly became the center of Christianism in Russia, becoming the cradle of hundreds of cultural and technological advances in the region.

Divided between an underground mausoleum of caves and the upper complex of churches and museums, Perchersk Lavra is an experience you can’t miss when visiting Kiev – you’ll enjoy the fantastic views and contrasts between nature, the river, and the outstanding architecture of the monasteries.

This Medieval Monastery was built during the 12th century and has suffered significant changes since its creation. Initially constructed with Baroque architecture, due to a fire in the 18th century the church was reconstructed with several additions, although the interior structure was mostly preserved, most critics can observe the different types of materials and techniques that combine to create this outstanding monastery.

You can appreciate many of the original frescos of the 12th century throughout the interior of the church, which blends with the relatively new masonry of the 18th and 19th century. If you’re lucky, you might be able to visit during a Catholic service.

Sitting on a hill of a Kiev lays the Cathedral of St. Andrews, a myriad of golden domes and baroque architecture that gives a regal aspect to the church and garners the praise as the most remarkable landmark of the city.

Build in the 18th century by orders of the Empress Elizabeth of Russia, the monastery was intended to function as a luxurious palace for the royalty, which still remains to this day, an air of elegance, luxury, and refinement can be felt when visiting this beautiful Monastery.

St. Andrews church is currently a working temple, so you can visit the church during one of the services and enjoy the beautiful sights coupled with the experience of an orthodox Catholic service.

This church is dedicated to Saint Prince Vladimir, who made Christianity the official religion of Russia, and it’s the main cathedral of the Ukrainian Orthodox Church Patriarchy.

With a Neo-Byzantine style, this wondrous church is a historical landmark that celebrates the 900th anniversary of Russian Christianity, making it one of the most important religious sites of Slavic countries. The seven golden domes that top the architecture’s decoration and the beautiful frescos made by renowned Russian artists make the church an example of religious art in the world, becoming the centerpiece for Christian pilgrimage in Ukraine and Russia due to its historical and spiritual meaning.

The Neo-Gothic cathedral of St. Nicholas is one of the most important Roman Catholic Cathedral in Kiev with a characteristic style that differs with the rest of the churches on this list. The exceptional gothic architecture makes it stand out from every building in its surroundings and beautiful work of art.

However, the Cathedral is currently shared between the Catholic Church and the National House of Organ and Chamber Music of Ukraine, meaning that the interior and some parts of the church are out of reach to tourists and only open during concerts, so you’ll miss part of the amazing interiors if you are not careful with its scheduling.

The Pyrohoshcha Church of the Mother of God is the byproduct of several changes throughout history, becoming a historical attraction due to the architectural modifications it has gone through.

Originally built in the 12th century with a Byzantine style, it was reconstructed in the 17th century by various artists; changing to baroque and then to neo-classical style. However, during the Soviet anti-religious campaign in 1935, the church was destroyed under the pretext of expanding the town square.

As of 1998, the church has been rebuilt with an ancient Rus style, but the historical accuracy is still in discussion. Nevertheless, just from the historical significance of the building this church is a landmark you can’t miss when visiting Kiev.

The small church of Saint Nicholas found in the center of Askold’s Grave Park is an amazing display of religious and cultural symbolism in Kiev.

Built around a legend surrounding the Russian Prince Askold, this church holds a significant place in the hearts of Christian populace in Kiev. Despite being smaller than the rest of the churches and cathedrals in the region, being surrounded by nature and its location at the center of the park gives an aura of solemnness and regality that portrays the combination of mysticism and nature.

Although a lonely place, the beauty of this church is something that can’t be compared to any of the other religious landmarks of Kiev and well worth a visit.