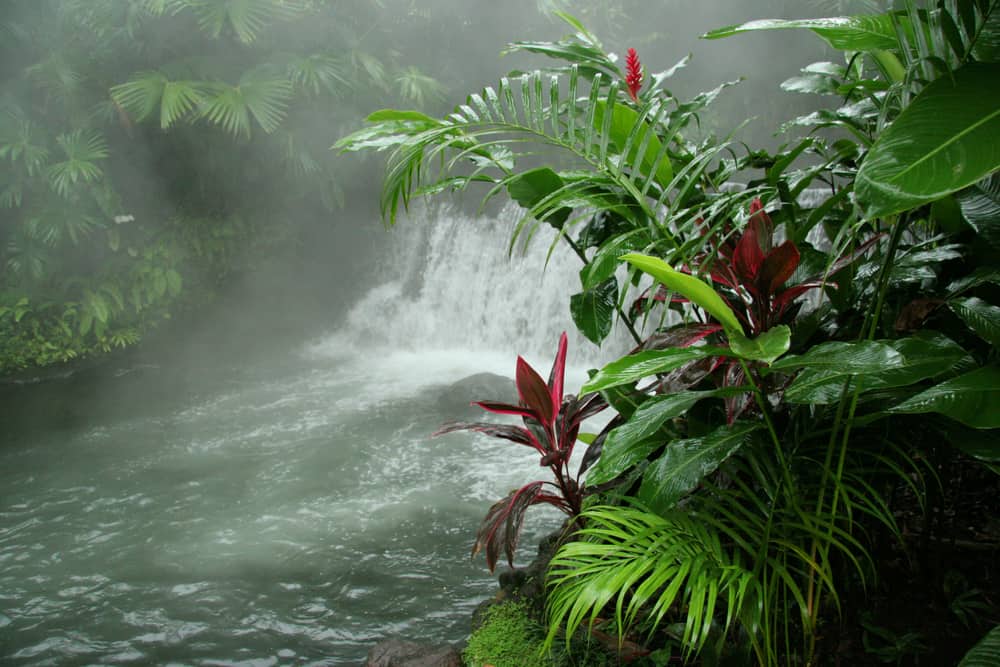 1. Costa Rica believes in building bridges, in looking for solutions to problems, and not clinging to positions. ―Óscar Arias

2. My own style depends on my location. Hippie-chic in Costa Rica, tailored and clean in N.Y.C., and great jeans and comfy tops with fun sneakers in L.A. ―Perrey Reeves

3. I have a place in Costa Rica that is in the middle of the jungle. There’s no Internet. There’s no TV. Do I work there? Hell no. ―Shane Smith

4. The Sanctuary at Two Rivers offers a much needed escape or retreat from the fast paced, modern lifestyle we have all become accustomed to, with its exquisite beauty, serenity, and raw nature. Costa Rica was the perfect place for developing such an important project. ―Perrey Reeves

5. I taught English in Costa Rica before I went to college. I’m not an especially outdoorsy guy, but sometimes I would spot wildlife while whitewater rafting or walking in the rainforest at 5 A.M. ―John Krasinski

6. Although it happens more rarely in men, breast cancer is not gender-specific. I was in Costa Rica, and in the shower I felt this lump under my left nipple. It was very small, mind you, but enough to make me call my doctor. ―Richard Roundtree

7. I studied a month in Costa Rica and loved it. I’m not scared to go abroad. I feel like I can figure things out and I know what to do. ―Kevin Olusola

8. I did a shoot with massive iguanas in Costa Rica when I was modeling back then. They were like little dinosaurs, and they sat right across my arms and by my face. The guy told me not to make any sudden movements because they had enormous claws. The guy said he would rip my skin if he attacked. ―Olga Kurylenko

9. ‘Jurassic World’ takes place in a fully functional park on Isla Nublar. It sees more than 20,000 visitors every day. You arrive by ferry from Costa Rica. It has elements of a biological preserve, a safari, a zoo, and a theme park. There is a luxury resort with hotels, restaurants, nightlife and a golf course. And there are dinosaurs. ―Colin Trevorrow

10. During the 41 years that have elapsed since Costa Rica abolished its army, our fundamental freedoms have never been threatened, nor do we know a shameful history of repression. ―Óscar Arias

11. Costa Rica, with its tourist-based economy and lack of a national army, has focused on keeping safe its beaches, parks and other public draws. It is one if the safest countries in Central America based on the number of homicides. ―Laura Chinchilla

12. If someone said, ‘You can go live in this little town in Costa Rica for a couple of weeks and all you’ve got to do is sing for us,’ I would do that. That’s more exciting to me than the prospect of going on some national tour, where you’re going to play arenas or sheds every night, because of the crushing repetition of that kind of line. ―Jackson Browne

13. My concern is not for the judicial system, but for the reality that the shark fin mafia of Costa Rica has a price on my head, and a Costa Rican prison would provide an excellent opportunity for someone to exercise this lethal contract against me. ―Paul Watson

14. Taiwan gives a lot of foreign aid to Costa Rica, so it looks like they are basically buying the right to fish, even though it’s not legal. ―Paul Watson

15. The Costa Rican government is prioritizing laying fiber optic over paving roads. Costa Rica is trying to become one of the Internet societies. This is happening throughout the world. ―Reed Hastings

16. It was easy to run around barefoot in oblivion in Costa Rica. But once I gave birth to my child, I didn’t want to be oblivious to the obvious. ―Carolyn Murphy

17. My brother’s a teacher in Costa Rica and actually does a more important and significant job than I will ever do. ―Dominic Monaghan

18. A lot of times on tour it’s about, ‘OK, where am I today? Wow, I’m in Costa Rica. What is their famous dish?’ And it’s about trying the food, and really experiencing it. ―Fergie

19. I was born in Costa Rica and we moved to America where it was a whole new world for me. ―Harry Shum, Jr.

20. I want to thank the pioneering women who years ago opened the doors of politics in Costa Rica. My government will be open to all Costa Ricans of good faith. ―Laura Chinchilla

21. Costa Rica is not afraid to go before any international body. ―Laura Chinchilla

22. While visiting Costa Rica, I was inspired to hear that someone had donated a playground to a local school. So when I returned to L.A., one day I just called the principal of a nearby elementary school and asked what I could do. Five years later, I’ve helped make over nine schools, repainting, renovating, and fixing up playgrounds. ―Cheryl Hines

23. I get recognized for ‘Reaper’ in the U.K. I was in Costa Rica and got recognized for ‘Heroes.’ In Canada, it’s ‘Rookie Blue.’ People also think that I’m in the ‘Twilight’ series because of Kristen Stewart. ―Missy Peregrym

24. Costa Rica and Germany have simply been pawns in the Japanese quest to silence Sea Shepherd in an attempt to stop our annual opposition of their illegal whaling activities. ―Paul Watson

25. My generation is so used to having our public spaces look like the Starbucks, with the beautiful lighting and the little bit of Nina Simone and my coffee that’s blended a certain way from Costa Rica. ―Sandra Tsing Loh

26. If there is no peace in Central America, it will not be because Costa Rica, and myself as president, have not done what is necessary to obtain peace. ―Óscar Arias

28. As the eco- and adventure-tourism capital of Central America, Costa Rica has a worthy place in the cubicle daydreams of travelers around the world. ―Lonely Planet

30. I think it is very important to conserve and protect the natural world. I’ve just come back from Costa Rica and they are really big on eco tourism. They have lots of reserves, and they are really into protecting wildlife. I visited a reserve called Cabo Blanco. You walk into the reserve and there are capucine monkeys swinging from the trees and sloths. I am big into nature, and seeing animals in their natural habitats. I love it. ―Colin Morgan

32. I’m an equestrian, so I like to ride. Ride horses, I love to hike with my dog, love to travel. Most recently I went to Costa Rica, which I loved. ―Kristanna Loken

33. Costa Rica remains peacefully and firmly committed to the well- being and safety of our population. We promote a model of development based upon harmony with nature; solidarity and social inclusion; economic and trade opening; development of our human resources, and innovation. ―Laura Chinchilla

34. Costa Rica, with its tourist-based economy and lack of a national army, has focused on keeping safe its beaches, parks and other public draws. It is one if the safest countries in Central America based on the number of homicides. ―Laura Chinchilla

35. Peace consists, very largely, in the fact of desiring it with all one’s soul. The inhabitants of my small country, Costa Rica, have realized those words by Erasmus. Mine is an unarmed people, whose children have never seen a fighter or a tank or a warship. ―Oscar Arias

36. When you have difficult issues on the table for discussion, then sometimes for Africa you may have Burundi or Gambia representing them on the Security Council; and then for Latin America you may have a country like Costa Rica, which is a wonderful country but they don’t have the same weight as others from the other regions. And sometimes they get bullied. Sometimes their capitals come under lots of pressure to take a position. ―Kofi Annan

37. Shamu and I have arrived safely in Costa Rica. He was stopped by airport security because he carries enough artillery in his pants pockets to construct a sawed-off shotgun. Evidently, he though we were headed to Iraq. ―Chelsea Handler

38. I have always loved marine biology and that is what I studied in school. I am hoping to build a marine sanctuary that will also be educational, an eco preserve and a school, perhaps in Costa Rica, that is one of my dreams and goals. ―Paul Walker

39. Human beings have got a lot of good, noble impulses inside them, and most people want to be good and do more good than they do evil. Hell, we’ve had nuclear weapons now for thirty or thirty-five years and nothing’s happened yet. That in itself seems to be a miracle. If Reagan pushes the button or somebody pushes the button in Russia or somebody pushes it in Costa Rica, they can put a big tombstone in outer space that says, “We gave it a good try.” Because we have. ―Stephen King

41. Straight-A student, no history of trouble, on a dream European vacation, turns into a hooker in a ratty hotel… There is no way I’m letting Alexis go to Costa Rica now. ―Richard Castle

42. It’s only Costa Rica. I’ll be back before you know it. ―Alexis Castle

44. Yeah, Costa Rica. Well it fell through, so you can put me back on the schedule, alright? ―Detective Danny Messer

45. Over the past year, there have been sightings of an armed group in Costa Rica. They’re not ours, of course. Costa Rica doesn’t have an army. Article 12 of our constitution states that “the Army as a permanent institution is abolished.” Ramón Gálvez Mena

50. So I hear they went zip-lining in Costa Rica. ―Sharon Goodwin

Episode: And Then They Were Puppies/A Case of the Sillies (2016)

52. I love my country. Now give me the watch so I can go to Costa Rica. ―Dr. Earl Dopler

53. I need that painting for my monkey sanctuary in Costa Rica. The monkeys find the colors rather arousing. ―Megan

56. The first one to skip was John Nance. He found a nice, warm, secluded place in Costa Rica. He thought nobody would find him there. ―Nicky Santoro

57. Not yet. I don’t think he wants to leave Costa Rica. I think some tribe found out he had a flashlight and turned him into a god. ―Tim Taylor

58. Sea sponges demand for pineapple homes has sparked massive deforestation throughout Costa Rica but being brainless sponges rarely weigh the consequences of their buying decisions. ―Narrator

59. We’ve traced the source to Polerdo, an island off the coast of Costa Rica. It’s a small island, not much more than a fishing village, and a resort hotel used exclusively by honeymooners – Hotel Eros. ―Mr. Smith

60. One of the richest hoteliers in the world. She’s currently building a resort on the Pacific coast of Costa Rica. Simultaneously, as it happens, the global energy firm for which father consults wishes to erect a wind farm nearby. Mrs. Esfandiari has won an injunction against the wind farm, asserting that it would impair her view. Now, father thinks she’s willing to drop it given the right favors in return. ―Sherlock Holmes

62. Shakira goes on living her mysterious and excentric life. She decided to ask no more than 15% as her payment. Camilla is living with Matt on Costa Rica’s beaches. Her Internet business is having more success as days pass. Tori has got her degree as Gastronomy, and is managing her own restaurant. She stopped working as a model and is living a passionate romance with Bonzo; they’re thinking of living together. Priz started studying to be an actress. Joel came looking for her, but she rejected him. Now she has three boyfriends, all know about it, and accept the situation. The four girls are inseparable friends, and are in constant communication with each other. ―Narrator