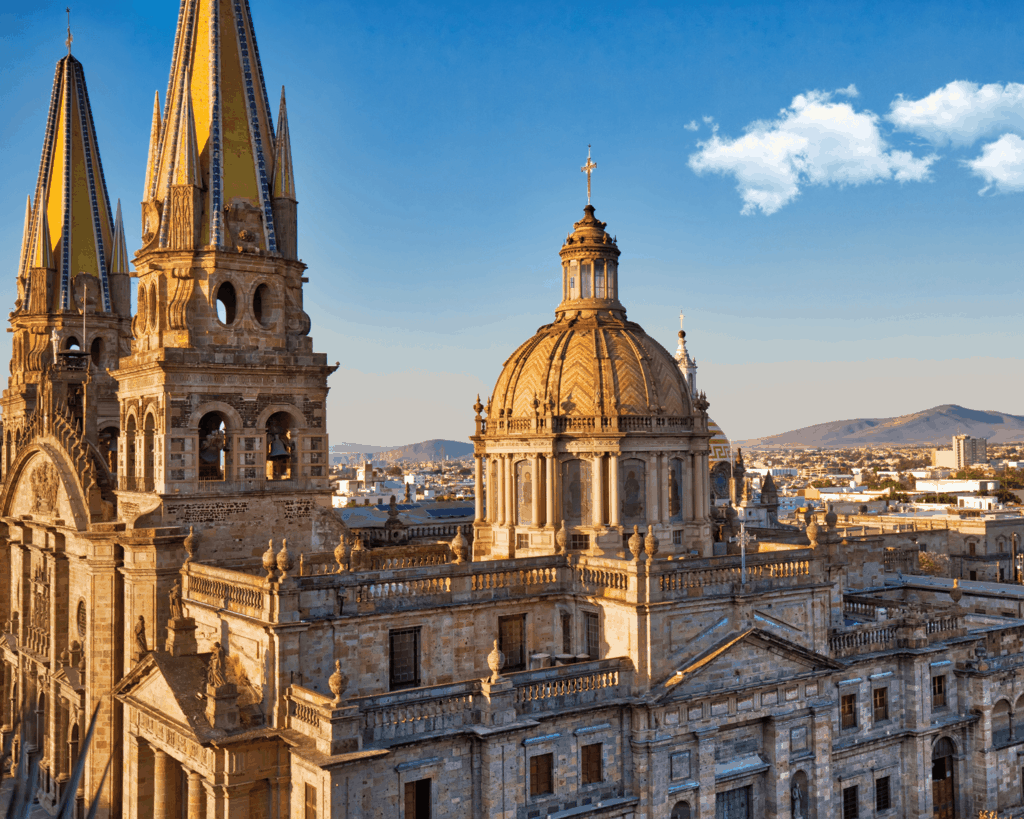 Really, Mexico City has always been this big, complex monster of a city that has always had real problems and needs, and I’ve always found my way through it in different ways. –Alejandro Gonzalez Inarritu

I feel absolutely no threat or fear in Mexico City.– Michael Nyman

I was born in Mexico, I am from Mexico City. –Paulina Rubio

I attended less than two years of Conservatory in Mexico City.– Placido Domingo

The most that somebody in Mexico City will get paid for a job in construction is 100 pesos a day. –Alma Guillermoprieto

As a city, it is always compelling. But every day in Mexico City, I give thanks that I am alive. –Alejandro Gonzalez Inarritu

Antonio Sanchez is from Mexico City. I met him at a Pat Metheny concert. He did a solo, and I thought, ‘This is an octopus man!’ –Alejandro Gonzalez Inarritu

Many Mexican directors are scared to shoot in Mexico City, which is why there are many stories in Mexican cinema about little rural towns, or set a hundred years ago. –Alejandro Gonzalez Inarritu

Have you ever been to Mexico City and haggled with the locals over souvenirs? Well, in Peru, you had to negotiate like that to get the freshest fish at the market. –Nobu Matsuhisa

The Aztecs believe they started up in what’s now New Mexico, and wandered for 10,000 years before they got down into where they are now, in Mexico City. That’s a weird legend.– Jerry Pournelle

A tour of the Mexico City of Diego Rivera and Frieda Kahlo led by Barbara Kingsolver would be nice. And I certainly wouldn’t turn down a tour of Johannes Vermeer’s Delft led by Tracey Chevalier.– Cathy Marie Buchanan

I was born in Mexico because my father was teaching at a school in Mexico City. I was born during the third year he was there. And when I was 16, I returned to Mexico to learn Spanish. –Lupita Nyong’o

I attended elementary school and high school in Mexico City. I was already fascinated by science before entering high school; I still remember my excitement when I first glanced at paramecia and amoebae through a rather primitive toy microscope.– Mario J. Molina

I’m Chief Executive Officer at Art of the Olympians Museum in Fort Myers, Florida, which was founded by my Mexico City teammate Al Oerter and his wife Cathy in 2005. It shows that Olympians can have another life; we have got art from more than 100 Olympians. –Bob Beamon

When we were 15, my girlfriend Ruth Kaplan and I applied to the Universidad Ibero-Americana in Mexico City. We were accepted into a program that placed us with a lovely Mexican family. We lived with them for six weeks while studying Spanish poetry and Mexican anthropology. –Mary Doria Russell

My mother was a great storyteller and a great historian in her own way. She only made it to third grade. She came from Mexico City at the tail end of the Mexican Revolution and that kind of turmoil and chaos and frenzy and also excitement.– Juan Felipe Herrera

I’ll tell you what makes me feel worthwhile: organizing and solving other people’s problems. It makes me feel good to go to Mexico City and figure out theories on how you can reorganize and reduce crime. To me, it’s one of the more fulfilling ways to spend a day. –Rudy Giuliani

It was in 1942 and I flew from St. Louis to Mexico City. I had just gotten married and we were on our honeymoon. I hit .397 and led the Mexican League with 20 home runs and was named the MVP of the league. It’s when I realized I could compete with anyone at any level. –Monte Irvin

I was taken out of school by my dad when I was 11 and lived in Mexico City, then later in Paris. I went with him to excavate in Bolivia and Peru. I never finished high school. I was a straight F student anyway. My father admitted to me later that he’d thought I would come to no good. –Michael Heizer

I saw what I could [in Mexico City], but we rarely got anything other than big, mainstream American films. –Alejandro Gonzalez Inarritu

There was a change in tone in terms of the [Donald] Trump who showed up in Mexico City for this press conference. –Steve Kornacki

Los Angeles is not Mexico City, but we have many fine nightclubs and restaurants here. It is enough. One must not aim too high. –Ry Cooder

Someone handed me Mexico City Blues in St. Paul [Minnesota] in 1959 and it blew my mind. It was the first poetry that spoke my own language. –Bob Dylan

Where have you been?” he asked slowly.”Um, in the bathroom, mostly,” Larry said. Let’s just say my plumbing is not working any better than Mexico City’s. –Kevin Sylvester

Thousands of Mexicans gathered in Mexico City to protest high food prices. The protest only lasted an hour, because everyone had to leave for their jobs in Los Angeles .–Conan O’Brien

For me the insurrectionary possibilities of disaster are what make them really interesting and sometimes positive – Mexico City’s big 1985 earthquake brought a lot of positive, populist, anti-institutional social change. –Rebecca Solnit

I have this great fear of Mexico City. I won’t go to Mexico City unless someone meets me at the airport and is with me. I just feel very vulnerable there.– Sandra Cisneros

See also
23 Best Souvenirs from Mexico City: Gifts for Yourself and Your Loved Ones!

I’ve always been a very lucky guy. A lot of crazy things have happened in my career, but I guess the first big break was when I moved to Mexico City from Chihuahua. –Omar Chaparro

I have been exploring [Mexico City’s] La Merced, [a public market famous for prostitution,] on and off for the last 23 years. The prostitutes and their world have been the main subjects of my photographs. –Maya Goded

I remember being caught in this earthquake in Mexico City and having a sense of people coming before me, of being part of this lineage. I felt similarly when I went to India and South America. –Anne Waldman

I spent some time in France, visited Egypt and Mexico City. I hung out, biked around, planted some tomatoes. I did everything except wake up in a new town everyday. It was really boring. It’s just life. –Feist

I was a street kid, basically. But really, Mexico City has always been this big, complex monster of a city that has always had real problems and needs, and I’ve always found my way through it in different ways. –Alejandro Gonzalez Inarritu

In Mexico City, Tehran, Kolkata, Bangkok, Shanghai, and hundreds of other cities, the air is no longer safe to breathe. In some cities, the air is so polluted that breathing is equivalent to smoking two packs of cigarettes per day.– Lester R. Brown

Mexico City is very different now than when I grew up, but I was in the streets all the time – though I was born to a middle-class neighborhood where there weren’t a lot of gangs and things. I was always comfortable. –Alejandro Gonzalez Inarritu

Peter [Norman] never denounced us, he never turned his back on us, he never walked away from us, he never said one thing against what he stood for in Mexico City, and that was freedom, justice and equality for all God’s people.– John Carlos

Children whose developing lungs are particularly vulnerable suffer the most from air pollution. For children, breathing the air in cities with the worst pollution, such as Beijing, Calcutta, Mexico City, Shanghai, and Tehran, is equivalent to smoking two packs of cigarettes a day. –Lester R. Brown

I went to Mexico City to visit, and I fell in love with the city. I went to my house to pick up my stuff. It was the craziest, most impulsive move I’ve ever done. I just felt like I had to stay there. –Julieta Venegas

I do have very deep, fond memories of my family in Mexico City, but I also remember feeling funny for not speaking English – I was basically an immigrant. But I picked up the language fast and soon I knew that I wanted to be a writer. –Louis C. K.

You want to hear about insanity? I was found running naked through the jungles in Mexico. At the Mexico City airport, I decided I was in the middle of a movie and walked out on the wing on takeoff. My body… my liver… okay, my brain… went. –Dennis Hopper

You’re going to see crime levels in America that are going to rival that of a Third World country. Welcome Mexico City. You’re going to start seeing people being kidnapped in this country like they do in other underdeveloping nations. It’s going to be very violent in America. –Gerald Celente

I think that, when Enrique Pena Nieto invited Hillary Clinton and invited Donald Trump to meet with him here in Mexico City, it was a thought that maybe, in the future, whoever won the presidency, during that transition period, or right after, would decide to come and visit Mexico. –Jose Diaz-Balart

See also
10 Tips for Seeing the Holbox Bioluminescence: Tours, What to Wear, What to Bring, + More!

Suicide by carbon monoxide used to be done in the garage. Now, all you have to do is go to Mexico City and inhale. –Richard Bayan