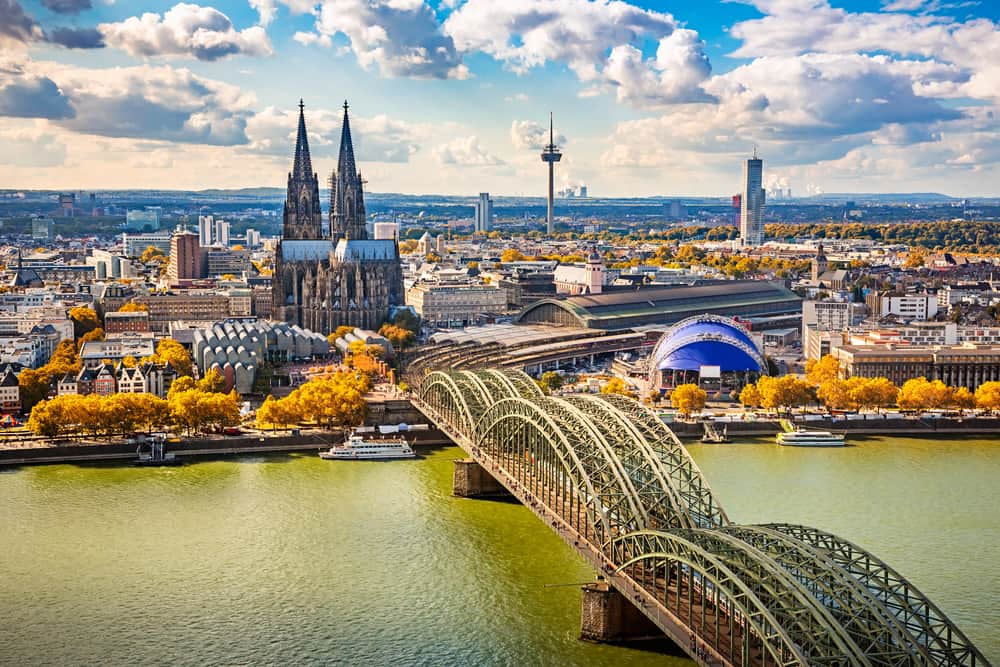 Germany is a country with strong industrial, cultural, and historical roots. The country is filled with picturesque cathedrals, enchanting castles, and old aesthetic towns, such as Bamberg and Trier.

As of now, Germany is home to 51 UNESCO World Heritage sites. Not only historical buildings, but the land also consists of lush green gardens, wild landscapes, and beautiful seas, like the Wadden Sea.

Of course, the presence of so many world-class heritage sites may have confused you while planning your trip. For your ease, we have compiled a list of 17 spell-binding UNESCO World Heritage sites in Germany. So check them out and prepare to be amazed!

The culture of Germany takes us back to the Roman period when many cultural sites were constructed. Even after centuries, these cultural sites are still in their original form and welcome tourists from every corner of the world.

If you want to explore the country’s culture, here are some must-visit UNESCO World Heritage sites in Germany.

Trier is one of the oldest cities in Germany, founded in 16 BC. The city belonged to the Gallo-Celtic tribe Treveri before the arrival of the Romans. Then came Julius Caesar, who conquered the city in 57 BC, the remains of which are preserved in the regional museum.

Upon the arrival of Cesar, the city became a hub of Roman monuments. Trier even established a commercial link with France and along the Rhine.

During the period of Constantine the Great (306-337), Trier’s infrastructure became even more charming, with the construction of several Christian buildings.

Even today, the city is famous for the captivating Roman monuments, including:

If you like the sound of this historical city, check out these other best things to do in Trier during your visit.

Würzburg was constructed by the Celts almost 1,000 years ago. The city holds the place of an important intersection, well connected with freeways and railways, and located at a 60 minute-drive from Frankfurt Airport.

The stunning Baroque palace and fascinating museums make this town one of the most attractive tourist sites. The palace is one of the largest UNESCO World Heritage sites in Germany, surrounded by lush gardens.

The city also hosts 30,000 international students, who contribute to the richness of its culture even more.

Museuminsel is an island that holds five outstanding museums in the middle of Berlin. These museums remind us of the 18th century Age of Enlightenment. Over the course of time, the infrastructure of the museum designs evolved significantly.

The exciting part is that each museum was specifically designed to create a natural connection with its art.

With the recent architectural advancement, the museum’s collections have also been adorned.

Constructed between 1730 and 1916, Potsdam parks and palaces are filled with glorious history. The place is the former residence of Prussian King, Friedrich the Great, in the summers.

The beautiful complex of parks and palaces creates an eclectic and artistic atmosphere that holds everyone into its spell.

If you want to have a quick look at this remarkable UNESCO World Heritage site in Germany, don’t forget to visit Schloss Sanssouci and Schloss Cecilienhof sites.

Known as Siedlungen der Berliner Moderne in German, this property consists of six housing estates. It is usually considered a unique pick for this list. However, the evolution in this property’s urban and architectural typologies clearly testifies it as one of the best UNESCO World Heritage sites in Germany.

These housing estates were constructed from 1910 to 1933, when Berlin was going through outstanding societal, cultural, and political progress.

The Berlin Modernism Housing Estates is an example of the building reform movement that changed the lives of Germany’s low-income people.

Moreover, this property features fresh design solutions, technical innovations, and aesthetic infrastructure — all thanks to the impressive town planning, garden design, and architecture approaches used by the architects of that time.

Cologne cathedral is the world’s third tallest cathedral. It possesses immense importance in Germany’s architectural monuments, as it is one of the remains from WWII in Cologne.

The construction of this Gothic masterpiece began in 1248 and wasn’t even completed until 1880.

The Cologne Cathedral is the embodiment of the strength of European Christianity. Apart from having spiritual value, the cathedral also features exceptional artistic skills and aesthetic views.

Additionally, the cathedral also boasts the highest church spires ever built. These spires give the best views of the entire Cologne city. If you visit during the legendary Christmas market, you’ll have ample opportunity to buy one of the many iconic German gifts found in German Christmas markets.

Regensburg is another one of the oldest towns in the country. It holds about 1,000 historic buildings, including merchant houses and patrician sites, all built by fine architects. The medieval environment of this town makes it worthy of inclusion in the list of top UNESCO World Heritage sites in Germany.

The main historical sites of this town are:

Bamberg is surrounded by several breweries and half-timbered houses built close to the river. The town is nicknamed “Franconian Rome” and holds one of the biggest and ancient town centers in Europe.

The medieval part of Bamberg has many twisted narrow alleys, reminding us of the good old days of the country.

On the other side of the city, the urban life is gorgeous and subtle on its own. The Universität Bamberg caters to more than 10,000 students. The city also holds an American Army Camp that consists of approximately 4,000 staff members, which equals 7,000 foreigners living there.

If you plan to visit UNESCO World Heritage sites in Germany, you can’t miss Bamberg’s magnificent castles leading to Biergartens.

With historic towns, several vineyards, and giant castles, the Middle Rhine Valley shows the long history of Germans’ evolution in architecture. The valley extends for 65km in central Germany between Mainz and Koblenz.

The Upper Middle Rhine Valley took over 2,000 years to be constructed, which is why it’s one of the best UNESCO World Heritage sites in Germany that holds the authentic German landscape.

During the Roman period, the valley was used as a traffic route. However, the formation of castles started in the Middle Ages.

The Middle Rhine Valley is linked with ancient legends and has seen several writers, composers, and artists for centuries.

If you have included Upper Middle Rhine Valley, don’t forget to visit Loreley. It is well-known for its echo, which is associated with many stories of the old times, like the one about the siren Loreley who used to attract sailors with her voice. It is the deepest point that comes in the way.

The beautiful castle built in between lush forests takes us back to the Middle Ages. The structure of Wartburg Castle has remained untouched over the years. However, its interior has been renovated to give it a more modern touch during the urban architectural advancement.

Martin Luther called the castle “an outstanding monument of the feudal period in Central Europe” in the New Testament during his exile at Wartburg Castle. It was around 1521 and 1522.

Still, the castle surprises us with its artistic highlights of the old days.

A walk through the castle gives us everything we want, from an ideal historical and cultural site to medieval infrastructure, aesthetic artistry, covered walkways, and half-timbered structural views.

Not only castles and ancient buildings, but Germany also holds several natural heritage sites. From deep seas to lush forests, you will be surprised to learn about the ecological evolution of the country.

The Wadden Sea is the largest unbroken marine system of mudflats in the world, located near the North Sea Coast. It perfectly portrays the unique tidal basin ecosystem that the Germans have worked on over the years.

Apart from the view, the locals of the Wadden Sea are also a delight to meet. The region is a host to hundreds of animals, including harbor seals, porpoises, and an average of 10-12 million birds migrating each year.

Tourists are offered bikes, boats, and buses to roam around the area and capture aesthetic shots from their cameras.

Ancient Beech Forests are a series of forests that stretches from Slovakia to Ukraine, collectively called the Primeval Beech Forests of the Carpathians.

The country’s five ancient beech forests are present at different points in the whole of Germany.

These forests show us the exceptional terrestrial ecosystem advancement of the country. Moreover, they also portray Germany’s impressive ecological and biological evolution.

While visiting the UNESCO World Heritage Sites in Germany, add the Jasmund National Park to your list to see these forests. This site is located just 45 minutes from Stralsund.

Popular as Welterbe Grube Messel among Germans, this fossil site takes us back to the Eocene Period, which was 36 million to 57 million years ago. The Messel Pit Fossil Site is located at a 30 minutes drive from Frankfurt.

This fossil site consists of more than 40,000 stunning fossils of animals, including mammals, reptiles, fish, and birds.

Once a volcanic lake in between a tropical forest, Messel Pit Fossil Site now looks like a pit holding heaven for archaeologists.

The cultural embodiment of 19th century Romantic Historicism, the Residence Ensemble Schwerin is one of the most beautiful heritage sites on the tentative list.

The aesthetic view of Schwerin’s lake amazes the visitors with the palace, town, and gardens. The lake is present in the central part of the Residence Ensemble Schwerin, which is a perfect spot for capturing the real essence of this property.

Apart from the lake, the property also includes the Schelf Church and Cathedral. This part holds ducal tombs, barracks, and several administrative buildings like court laundry and the stables.

See also
7 Dresden Tours You Should Book & One to Avoid at All Costs!

This UNESCO World Heritage site in Germany comprises three gigantic palaces constructed between 1868 and 1886. Built by King Ludwig II, these palaces helped the king escape from the stress of politics and live a life just as he wanted.

The popular Neuschwanstein Castle was modeled on a medieval knight’s castle, and the Herrenchiemsee Palace was created on the Versailles of Louis XIV.

It is said that King Ludwig II was greatly impressed by the Bourbon Kings and Richard Wagner’s operas. For the same reason, he built a fantasy park in Linderhof inspired by them.

Dating back to the early Enlightenment and Pietism period, the Francke Foundation Buildings in Halle represent the country’s educational and social architecture at their best.

These foundation buildings consist of an orphanage, school, boarding schools, workshops, library, pharmacy — all built by a German philanthropist, August Hermann Francke. This was around the late 60s.

The most famous buildings are the orphanage and a 5-story high half-timbered house, “Lange Haus.”

The illustration of the close ties between Jews and Christians, the Old Synagogue and Mikveh is located in the medieval town of Erfurt. It serves as a reminder of the time of Ashkenazi Judaism of the 11th century.

The Old Synagogue is Europe’s one of oldest preserved synagogues. As of today, the synagogue features Erfurt’s treasure, including hoards of coins and jewelry. It is said that this treasure was hidden in 1349’s Black Death programs.

This UNESCO World Heritage site in Germany also includes a mikveh and an astonishing residential building from the 13th century.