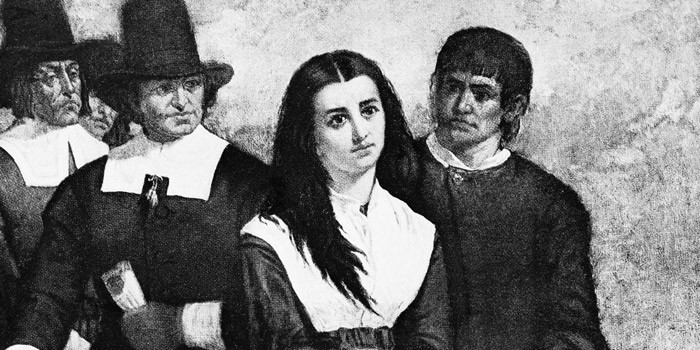 Listen to the Episode “The Boston Witch Trials”

The Salem Witch Trials are one of the most (in)famous events in American history. There are plays, movies and books about it, and no American schoolkid made it to junior high without learning about them. But did you know that there were actually witch trials held about 30 miles to the south of Salem, in Boston? My guest today is Nancy Mades-Byrd, host of The Witch Hunt Podcast, who lives in Salem, and who has studied the period her entire life. Nancy tells me about what happened in the Boston Witch Trials, why they maybe didn’t capture the national imagination in the same way, and what influence they had on the little town to its north.

[bctt tweet=”Think you learned everything about the Salem Witch Trials in middle school? Think again. You’re going to want to listen to this week’s #historyfangirl #podcast.” via=”no”]

The story of Goody Glover

The most famous witch trial in Boston happened in the city’s North End, now beloved by tourists and Bostonians alike for its Italian culture. But in the 17th century, when Boston was a Puritan theocracy, witch trials were not uncommon. The last and most famous victim to be hanged was an Irish Catholic woman named Ann Goody Glover, who died on November 16, 1688. Glover, a widow, had been deported from Ireland to Barbados with her daughter, expelled by Cromwell during his occupation of Ireland, and then eventually made her way to Boston. She and her daughter worked as servants in the home of John Goodwin, neither of them speaking English (They were Gaelic). That played a huge part in Goody Glover’s tragic story, as did the treatment of the Irish in Boston at the time. As Nancy told me, “The only thing Boston hated more than a witch was a Catholic.”

[bctt tweet=”This week, I talk with @WitchHuntpod about the Boston Witch Trials, and what they can teach us about Salem. #witchhunt #HistoryFanGirl” via=”no”]

What does a doctor prescribe for witchcraft affliction?

Goody Glover’s downfall all began when the Goodwin children began coming down with bizarre symptoms. They were having seizures, running around on all fours and making guttural noises, throwing religious books around the house. And so the family doctor diagnosed them with the 100% legitimate medical condition of witchcraft affliction. And while we may think of witchcraft accusations as common because of their historical prominence, Nancy told me only 80 people were accused of witchcraft in the 17th century, most of them in Connecticut. But even though not too many people were executed for witchcraft, everyone still believed in witches, so the doctor’s diagnosis wasn’t too beyond the pale. And there was even a prescription for those under the spell of a witch: fasting and prayer.

[bctt tweet=”Ann Goody Glover was the last woman to be hanged in Boston for witchcraft. But was the real problem that she was a Catholic? #HistoryFangirl” via=”no”]

A figure who would be made famous for his role in the Salem Witch Trials, Rev. Cotton Mather, took an active interest in Ann Glover’s case as well. He took the 13-year-old daughter Martha into his home to study her condition, and she’s the one to finger Ann as the one who’s afflicting her. And as Nancy tells me, Ann didn’t have much of a chance, given the language barrier. Cotton Mather then went on to write a book about the trial, which became a 17th-century bestseller, and almost certainly would have become a well-known tale in Salem. But Nancy says the Salem girls weren’t simply copying the Goodwin children. Historians now believe both groups of kids were suffering from something called mass psychogenic disorder, a sort of group mental illness that has popped up throughout history.

[bctt tweet=”One of the many fascinating stories that @WitchHuntPod tells us in this week’s episode is about Half-Hanged Mary, reportedly an ancestor to the great @MargaretAtwood. #HIstoryFangirl” via=”no”]

Half-Hanged Mary and other scapegoats

The Salem Witch Trials were of course the most famous and most extensive, with Nancy noting that some 200 people were accused of being witches, but Boston and Salem weren’t the only places suffering from witch hysteria. Nancy talks about the story of Half-Hanged Mary in Connecticut, and what was happening in Europe, where as many as 60,000 people may have been executed as accused witches between 1630 and 1660. Nancy is so knowledgeable about this slice of history, and I highly recommend everyone check out her Witch Hunt Podcast. As this episode proves, there’s so much left to learn about a time in history we all studied in school.

[bctt tweet=”If you’re thinking of visiting the Boston area and want to learn more about the witch trials, you’re going to want to listen to this week’s episode. #HistoryFangirl ” via=”no”]