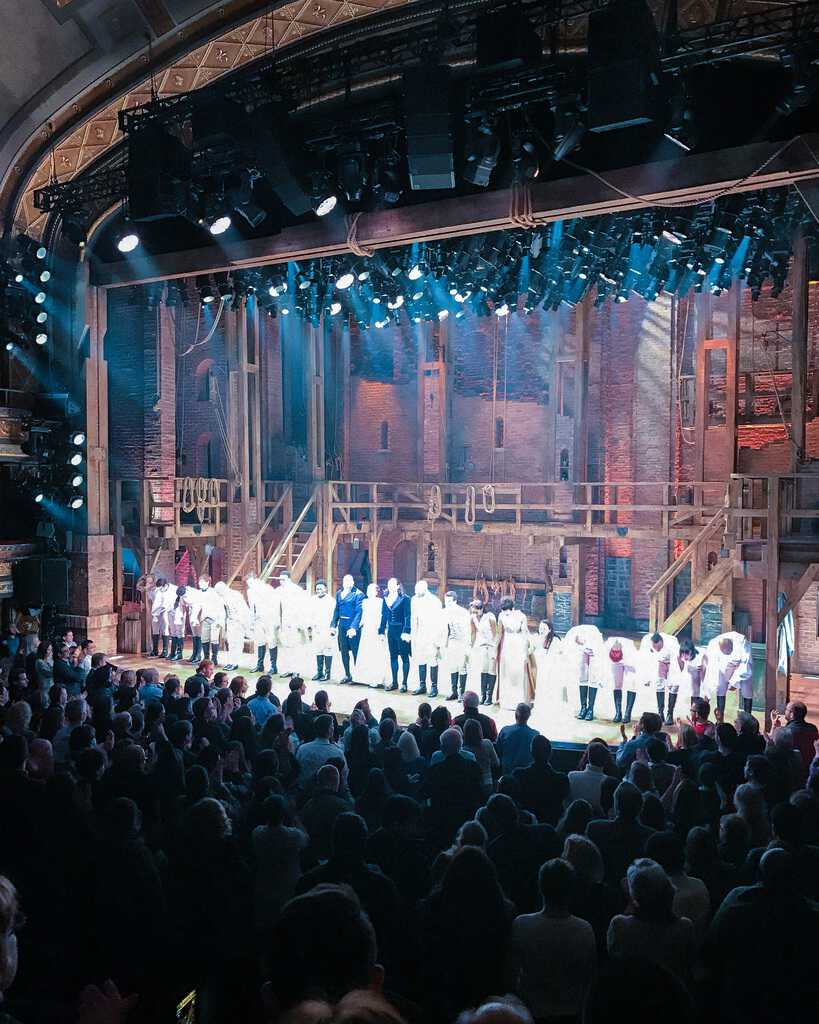 Once upon a time (May, 2016), my friend Ashley and I were on an epic western Irish road trip stalking Star Wars filming locations and chasing baby animals on the side of gorgeous mountain highways.

What could make this time better? we asked ourselves.

Thank god for Spotify, because the answer was so obvious. Listening to the Hamilton soundtrack and Beyoncé’s Lemonade back-to-back every single day.

Seriously. They’re both so good in their own right, but they go together like a pedicure and a back rub. Like sure, the pedicure is great. But how much better would it be with a back rub?

And we both agreed we each needed to see Hamilton in person, but we didn’t know when/if it’d be together.

The Best Idea Ever

Fast forward to November 2016, when I figured out I’d be in New York for a few days in January. I texted Ashley that we just HAD to go while I was in NYC crashing at her place.

Within forty-five minutes, we’d each spend more than the cost of a roundtrip ticket to Europe on theater tickets. Gulp.

And yet, totally worth it.

But, to really make it worth it, I decided to have a super-themed Hamilton weekend and added some historic spots on my itinerary.

This was my second-ever Broadway show (I saw The Phantom of the Opera in 2007). If you’ve never seen a Broadway production, and you’re even a bit into the theater, you should definitely go. It doesn’t have to be the hottest, most expensive it-show, just go to a show. They’re on Broadway for a reason. Plus, if you’re visiting New York in winter, it’s a great experience where you also get to stay warm!

Of course, each play-going experience is unique. Ten years ago, I was a Teach For America math teacher, chaperoning middle schoolers from North Philadelphia to the city. So while I loved the play and I loved my students, I was on edge, worried about the possibility of losing a kid in Times Square. My enjoyment of the play came a distant second. For this one though, I was completely and one hundred percent dedicated to the show. THE SHOW. IT WAS FINALLY THE DAY OF THE SHOW.

And so of course, I almost missed it. Getting to the theater was kind of a nightmare. I had zero cell phone reception. Oh, and I have zero navigation skills in Brooklyn where my friend’s apartment is and where streets don’t make sense to me. I spent an hour (seriously) lost within four blocks of her apartment. I got to the theater with five minutes (again, seriously) before the show started.

And it started on time.

The show was amazing. Stunning. Wonderful. The cast is new (the original cast’s contracts ran out in the summer). But since I’ve sung along to the soundtrack so many times, it was fun comparing the original cast’s choices with the current group of performers. There were even a couple I liked better than the originals (though I wouldn’t tell them to their faces).

For those who don’t know, the show Hamilton is based on the life of America’s first treasury secretary Alexander Hamilton. It sounds so weird until you see the show or listen to the soundtrack. Afterwards, you kind of can’t believe that it hadn’t been done before. Lin Manuel Miranda is a genius who makes it look easy. Only a genius would read a thick, historical biography and turn it into a hip-hop musical.  Lafayette raps in French. Thomas Jefferson is a jerk. One of the songs is inspired by Destiny’s Child. It’s so crazy good.

And now that the show is going to be playing in different cities over the next few years, you won’t have to trek to NYC to see it.

Crying tally: once in the first half, and then basically from the beginning of Eliza’s solo Burn straight through to the end of the show. Not pretty crying either, just ugly, makeup-ruining sobs. Ah, the theater.

The Richard Rodgers Theater is gorgeous inside. Built in 1925, it has the feel of a grand playhouse when you step inside. Other important shows that premiered at the Richard Rodgers Theater include 1776, Lin-Manuel Miranda’s Broadway début In the Heights, and Guys and Dolls. Check out this video from Spotlight on Broadway on the theater’s history.

After the show, we headed to an over-priced Irish pub to soak up the rest of our emotions before heading back to Brooklyn.

A few tips for seeing a Broadway show. First, make sure to dress up a bit so you don’t feel out of place! Second, you can get there on the subway, by taxi, or you can arrange for a town car or even use Limo Find to find a limo to reserve for an extra bit of style.

During the next couple of days, Ashley had to head back to her real job, so I did my touristy Hamilton things by myself. I have been to New York dozens of times in the last ten years, but after my first couple of trips, we stopped doing tourist things, opting instead for brunches and girls’ weekends. Actually heading out to a classic NYC sightseeing spot felt strange.

I started with the Statue of Liberty. Since it’s a UNESCO site, it will get its own post in the next few weeks. However, it was a great addition to a Hamilton weekend for two reasons:

The Harlem neighborhood Hamilton Heights is named after Alexander Hamilton. Later in his life he designed and built a house called The Grange. Miranda highlights the move and the Hamiltons’ time here in the song “It’s Quiet Uptown.”

The National Park Service moved the house from its original site to St. Nicholas Park. The lower level is a small museum, while the upper level has three historically furnished rooms. The Grange is only open Wednesday through Sundays, so check out the NPS website to check times. Admission is free.

Spoiler alert: everyone who was alive during the show is now dead.

In the last song “Who Lives,Who Dies, Who Tells Your Story,” Eliza tells Alexander that Angelica “is buried in Trinity Church near you.” This has made Alexander’s grave a prominent stop on the Hamilton fan travel itinerary. In fact, it would be impossible not to spot which grave is his before you get close:

Eliza and Phillip are buried next to him. Hercules Mulligan (who needs no introduction) is buried a little ways away.

The church is on Wall Street and is only a ten-minute walk from the Statue of Liberty Ferry. It’s history and beauty are worth the visit in its own right. I remember seeing it for the first time in 2008 and being struck by seeing a historic church in the middle of the financial district. There’s no cost to tour the cemetery or the inside of the church.

I’m not the only Hamilton fan to geek out on Hamilton history, and there are many other activities you could add if you have more time or ambition. Some ideas: