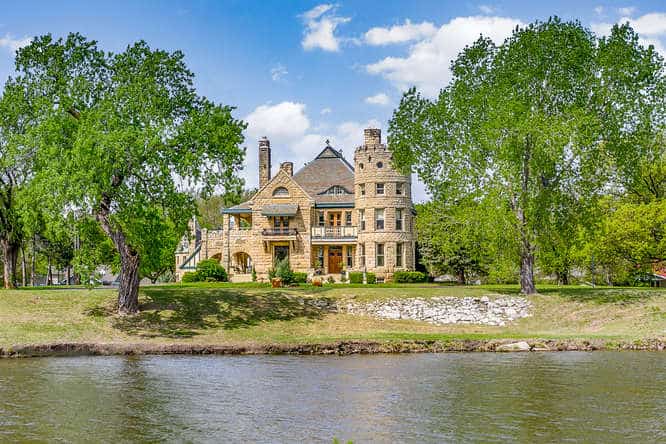 I love seeing castles! I have spent time abroad exploring some of the most beautiful castles in the world and I can attest, seeing castles in Kansas can be just as exciting as seeing them in Europe! You just have to know where to look.

Here are the best Kansas castles which you can find all over the state! If you know of any that I missed, add it in the comments!

How to Visit Kansas’s Castles

Well, if you’re a Kansas local you probably already know that getting around the state is really tough without a car. I didn’t have a car the first two years I lived in Lawrence, and it was tough! Of course, when I finally did get a car, I got in a wreck in Manhattan, but that’s another story.

Since you really need your own wheels, I have tips below for renting a car if you don’t have one.

The good news is that most of these are easy day trips from many parts of Kansas, so hopefully, you can find one or two that piques your interest. However, if you do decide to stay nearby, all of these would make excellent Kansas weekend getaways.

The Best Castles in Kansas

The Sauer Castle is a 19th century Italianate Villa-style castle, constructed around 1871 and sits vacant in a residential neighborhood, off a sidewalk at Kansas City, Kansas. This renowned Manson is reportedly haunted.

It’s named after Anton Phillip Sauer, a German immigrant who visited Kansas City for the first time in the 1860s. Anton Sauer lived in the residence after it was erected till he passed on in 1879. His wife continued to live in the same house until she died in 1921.

Today, the Manson belongs to Anton Sauer’s great-great-grandson, Carl Lopp, who acquired the property back in the 1980s.

While it was built to look and feel older, the castle features an innovative lighting plant that powers the home through gas generation using calcium carbide and water (plus an interior water system).

The home was leased to Dr. Elstone in 1925 and was turned into a rehab center for people struggling with mental illness. Subsequently, it became a restaurant, a clubhouse, and a Halloween haunted house.

This castle is majestically situated in the northwest of Lindsborg, Kansas. Built by the Works Project Administration (WPA) in 1936, it was already a famous place in town even before there was a castle here on top.

That’s becasue was the spot where Francisco Vásquez de Coronado suspended his search quest for the seven cities of gold and returned to Mexico. Coronado Height Park currently belongs to the Smoky Valley Historical Association.

Okay, I don’t want to hear any complaining about how this is not “technically a castle.” It’s one of the coolest spots in Kansas and would be the perfect backdrop to a romantic, medieval photo shoot. So I’m counting it. Also, some of the oldest castles in Europe pretty much look like this now anyways.

Castle Rock is a historic landmark on the Butterfield Overland Trail. According to history, the chalk in the area was formed by an ancient inland sea. The weathering of the chalk by wind and water brought about its formation. Its name was coined from the appearance of a castle rising above the prairie.

This limestone pillar landmark is situated in the badlands steep crevices and hoodoos region, leading off a large ridge, in Gove County, Kansas. The formation of the castle rock is getting weak and may wear off anytime. A thunderstorm that occurred in 2001 was what cracked down its topmost point.

The 1888 Scottish castle is sited at the bank of the Little Arkansas River, carved in stone and housed in The Historic Campbell Castle –featuring an elegant grand Foyer, for warmth and relaxation.

The story of the castle started in 1886 when cattle baron Col. Burton Harvey Campbell began executing the project of constructing a luxury castle that was worth $90,000 at the time. The site is full of intriguing artifacts and is currently being used as an event center.

This Normandy-style castle home built by a French wine merchant in 1883, is located in Topeka. This place is an old home for wine lovers and winemakers, providing a tasteful wine room, dinosaur garden & a secret passageway.

According to the story associated with the castle, the passageway was constructed by Matrot, due to his fear of the French political assassins that posed as threats to him and his family. The castle boasts of renaissance-style flooring and a secluded picnic spot where visitors are allowed to dine and enjoy Kansas-made wines.

Now a historical museum located in Atchison, Kansas, the castle was built way back in 1882 by banker W.W. Hetherington. It perfectly represents the opulence of the Victorian era.

Today the castle is listed on the National Register of Historic Places. There are exactly twenty-five rooms in this museum –each, stylishly decorated with antique decor.

The building was officially turned into a museum in 1978.

Yes, Wichita’s old City Hall is a castle that towers above the surrounding area. And, since it’s been turned into a museum, you can visit it!

Wichita-Sedgewick Museum is an exceptional 170-foot tall clock tower museum, housed in Wichita’s old City Hall for the last four decades. The museum protects and presents the old records of the Wichita and Sedgwick County history.

It educates visitors about the local history of Wichita. The museum still sits in the heart of downtown Wichita, at 204 South Main, and east of the former Wichita Public Library, in Kansas.

The iconic Hand-hewed sandstone structure is known as the one standing structure in the place where the town of Kalida once thrived.

It is one of the many haunted castles in Kansas, located in Yates Center, KS –featuring artistic carvings and towers –underneath the castle is a utility cave built for preserving perishable items. The castle cave was mainly utilized as a farm utility cave.

As a Jayhawk, it always pains me to give credit to K-State, but here they do have us beat.

Nichols Hall is situated on the campus of Kansas State University, Manhattan, Kansas. This building was first raised in 1911, it looks exactly like a castle and battlements, especially when viewed from the outside.

Its original interior was destroyed by a fire in 1968, but, the structure was raised the second time in 1985. The building now functions as a place for entertainment and theatre, and is used by the Department of Communication Studies.

Pin this Guide to the Best Kansas Castles for Your Adventures!