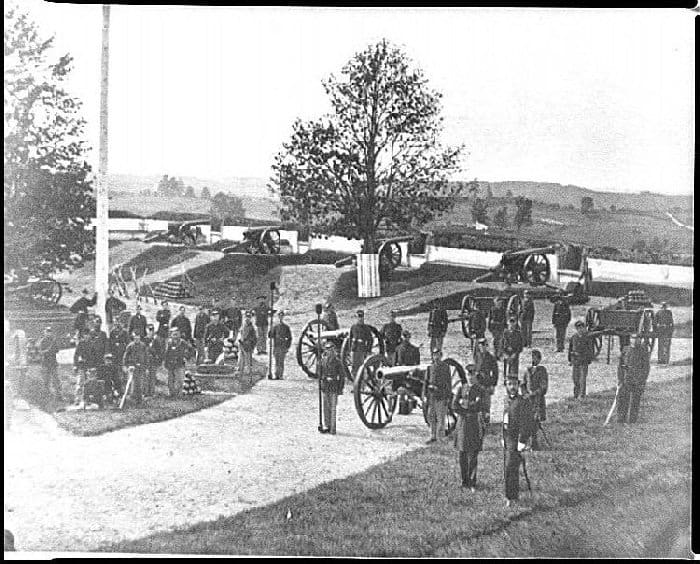 Listen to the Episode “The Civil War Defenses of Washington, D.C.”

For American history buffs, the Civil War can feel like covered ground. But if you put aside the big battles and turning points, there are still so many smaller, fascinating stories deserving to be told. And there truly is no one better to dig into those lesser-known stories than my guest, CEO of Atlas Obscura David Plotz, whom you may also know as the co-host of the Slate Political Gabfest. In this episode, we talk about how the city of Washington D.C. defended itself during the Civil War, why it built dozens of forts around its perimeter, and why those forts are now in ruins. It’s a huge honor to have David on the show today, and I can’t wait for you to hear it.

[bctt tweet=”On this week’s episode, I’m so honored to have @DavidPlotz of @AtlasObscura on to talk about the defense of Washington, D.C. during the Civil War.” via=”no”]

David told me he first got interested in the forts the capital when he went on a bike ride with his daughter down a path he’d never gone down before. And while pedaling around, he noticed that all of the areas they were biking through were named “Fort” something. And when he looked at a map, he realized that all of the areas arranged in a circle around the capital were named for Civil War defenses. And then later, on a hike with his family, he discovered the remains of Fort Derussy out in the middle of the woods. You can still see it today, the moat, the high earthen walls (David mentioned he and his family played capture the flag there for his wife’s birthday). As David says it’s a magical place now, but we dig into why Fort Derussy was built in the first place, and how it and the other forts came to be forgotten.

[bctt tweet=”Did you know you can visit the ruins of Civil War forts in Washington, D.C.? You can even play capture the flag on them, as @DavidPlotz tells me in this week’s episode.” via=”no”]

The union built 68 forts in Washington, D.C., most of them between 1860 and 1863. As David points out, the capital of the union was actually in the heart of Confederate territory, so the fortification had to be extensive. And of course, while D.C. had to be defended, as David highlights, there is “strong evidence” that the building of so many forts was an attempt by the Army Corps of Engineers to show Congress how important it was and to boost its funding. It was a huge effort, considering that before the war, there was only one fort in D.C., Fort Washington, which stood fairly ineffectually in the War of 1812. As David says, D.C. was an important location not so much for military strategy, but for morale. The South didn’t want to win the North, they just wanted to force a settlement. So the Union “defended the heck out of it,” to prevent its capital from falling, and allowing the South to claim that leverage point.

[bctt tweet=”One of the craziest stories from the Civil War happened at Fort Stevens in Washington, D.C., but even #buffs may not know the whole story.” via=”no”]

The battle for Abraham Lincoln’s seat

Nothing much happened in Washington, D.C. for the first four years of the war. In fact, D.C. was set up largely as a hospital city to treat the Union’s wounded (and it’s where Clara Barton set up shop). In fact, David says, the forts of Washington had begun to atrophy by 1864, because there weren’t any attacks. And the soldiers stationed there weren’t the best because those were off fighting the major battles. But that year, General Robert E. Lee decides the Confederacy should take Washington, D.C., forcing out Lincoln and sweeping the presidential election to the Democrats. And so in July of that year, 15,000 cavalries came to D.C., but when confronted by the high walls of Fort Reno, decided to go a different way. Little did they know, Fort Reno was abandoned. That was just the first of a few tactical mistakes that made the next day’s battle at Fort Stevens a historic victory for the Union, but that’s not even the craziest part. You’ll want to listen to find out who made a surprise cameo.

[bctt tweet=”Washington D.C. was once surrounded by 68 (!) forts to protect it from falling into the hands of the Confederacy. @SlateGabFest’s @DavidPlotz tells us of the city’s hidden history.” username=””]

The ruins of D.C.’s forts, and David’s favorite spots

Many of the Washington forts were on private land, so after the war was over, the owners of that land tore them down. Some ended up on public parkland, which is why David and his family could play Capture the Flag on the ruins of Fort Derussy. But as David says, though the defenses were important to protect the Union, they weren’t consecrated ground. Not a lot of people died there, there wasn’t a lot of revered battles. But these forts still clearly have a place in D.C.’s history, and along with the remaining sites, David provides a Washingtonian’s guide to the unknown history of the city. You’re not going to want to miss this.

[bctt tweet=”Can you name the only time an American president has come under enemy fire during a battle? Find out on this week’s episode.” via=”no”]

This episode features the song “Places Unseen” by Lee Rosevere.