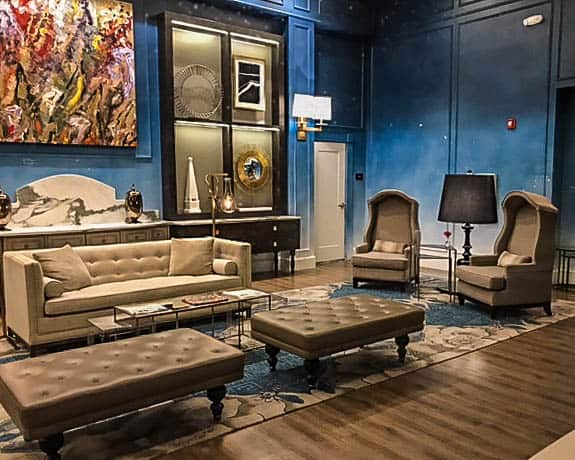 During my recent trip to the South, I had the opportunity to stay at the Elyton Hotel in Birmingham, Alabama, where I stayed while visiting Alabama’s Civil Rights Trail with Alabama Travel in September.

It’s one thing to travel to a historic location, but a trip gets to a whole different level when you’re sleeping in history, too. So while I don’t go around reviewing every AirBnB and Holiday Inn that I stay at, there’s something special about a historic hotel or bed and breakfast that simply must be shared.

Whether you choose to stay at a historic location or simply drop in for a cocktail, one of the coolest ways to learn about history is by seeing these places “in action” so to speak.

Because prices for hotels change so frequently, you can check prices for the Elyton Hotel on Booking.com for updated rates.

A Brief History of the Elyton Hotel

The entire facade is executed in molded terra-cotta. The 1st Avenue entrance is flanked by monumental pink granite Doric columns. The arched niches above the paired windows in the upper story feature sculpted busts of allegorical figures. Larkin (as Frederick the Great) and Welton (as Emperor William) appear among them. The elaborate and colorful cornice features a repeating shield motif of large white capital “E”s, representing the developer. Interior finishes included Italian marble and mahogany. Services included in the building when it opened included hot and cold running water and a central vacuum system.

The intersection where the Empire Building sits in downtown Birmingham was capped at the time with four beautiful skyscrapers, symbols of the city’s golden era, leading to the spot being nicknamed the “Heaviest Corner on Earth.”

The building was named to the National Register of Historic Places in 1982. At the time it was also known as the City National Bank Building. From the register’s description of the building’s architecural significance:

The Empire Building (1909) is a 16-story steel-frame skyscraper sheathed, on its two street facades, with white and polychromed terra cotta and richly decorated with Renaissance Revival Classical ornament. A base of monumental attached columns (capped by cushion capitals with egg-and-dart and rosette moldings) and attached Tuscan pilasters carry an ornamented cornice and third story distinguidhed by delicately molded terra cotta panels of foliate and twisted-column design. The plainer central body of the building rises for ten stories with a vertical emphasis highlighted by moldings that frame the ranges of paired windows and culminate in cartouches below a simple corniceline. A horizontal cross-emphasis is given by the spandrels below the paired windows at each floor. The upper stories carry a series of nine Florentine windows set into a diaper-patterned polychromed terra cotta wall surface. The windows have elaborate moldings that frame the inner arcade, which is supported by pilasters and a twisted column with foliate capitals. The arcade carries a spandrel within which are busts of heroic and mythical figures. Attic windows are set into the frieze of a massive, elaborate Corinthian cornice of modillions, dentils and classical moldings. The cornice carries a corona which bears 20 panels of the “E” ensignia of the Empire Improvement Company.

Of the interiors, the entrance lobby remains essentially intact, with multicolored walls and floors of various marbles, a panelled and coffered plaster ceiling, bronze elevator entrances and massive brass and milk-glass chandeliers. The unfortunate closure of the balustraded staircase to the second floor could be reversed. The upper floors have been substantially altered except for the bronze elevator doors with marble framing.

The Register goes on to list its historical significance:

Besides its architectural significance as part of this grouping, it is also significant as the most elaborately developed Neo-classical style skyscraper in the city and perhaps in the Southeast. The finely articulated base with its monumental columns and pilasters and the frieze of polychromed terra- cotta at the top three floors exemplify the skill of architect William Leslie Welton. Welton was trained at the Massachusetts Institute of Technology and also studied at the Ecole des Beaux Arts in Paris. After his studies he worked in the firm of McKim, Meade and White, moving to Birmingham in 1907.

The building became vacant in 2009, and in 2017 it reopened as an upscale hotel in a historic setting. Its parent company, Ascent Hospitality, details how it chose the name Elyton Hotel to honor the building’s history in this press release:

A hotel coming to the historic Empire building at the corner of 20th Street and First Avenue North has been renamed to pay homage to the founding of the city of Birmingham.

Ascent Hospitality, which has been developing the 1909 building into a Marriott hotel, announced this week that the name has been changed from The Empire Hotel to The Elyton Hotel.

Elyton was the name of one of the area towns that predated Birmingham, and the Elyton Land Co. helped develop Birmingham in the late 1800s.

The group also chose to keep many interior architectural details:

The inside of the hotel maintains a largely neutral color palette with pops of turquoise, and blends the building’s historic touches like the antique chandeliers and marble staircase with new touches like bright blue paint and creative light fixtures.

Walking into the hotel, I couldn’t help but look up. The building begs you to crane your neck and stare at all the architectural details, appreciating every floor of the skyscraper until you hit the sky. Since we arrived at dusk, the view had that extra golden hour hue that really made the colorful works on the white building pop.

The rooms are sleek, modern, and cozy at the same time. Mine was decked out in rich grays and had a cool nook for getting some work done. The room was very high tech, with a tablet for controlling features like the alarm. Maybe because we’d been learning very heavy history, or maybe because we were sightseeing for very long days, but it seemed like whenever I laid down I felt like I was sinking into the bed and straight into a luxurious sleep.

The walk-in shower, modern vanity, and separate powder room gave the room an extra touch of luxury. The water pressure and temperature were fantastic (strong enough to get the wrinkles out of my dinner dress), and the toiletries were extra nice with a local touch.

The hotel was extremely responsive. I had an issue with hot water the first night there, and they came and fixed it immediately.

Whenever I needed anything from the staff, they were so friendly and accommodating that it was hard to forget I was in the middle of the southern charm belt.

The lobby is gorgeous-covered teals and blues with furniture that just begs you to hang out while at the same time making you feel you’re in one of the poshest spots on earth. Since I was traveling with a few lifestyle and fashion bloggers, it was fun to see how they used the interiors to create fantastic Instagram-ready self-portraits in the huge, beautiful space.

Places like the Elyton offer so much for different kinds of travelers-I can appreciate the history and comfort, while others ogle the style and sophistication while appreciating a touch of historic significance. There’s something for everyone to appreciate here.

Without a doubt, my favorite spot in the hotel is the rooftop bar Moonshine. I spent hours up there hanging out with my friends Rachel, Tomeka, and Tomiko, and it’s a really fun atmosphere with awesome views. Here’s their website for more information about hours, etc.

I heard from some locals that the rooftop bar at the Elyton is the place to be, even for people who aren’t staying at the hotel. I love when places like this are designed for more than just guests, but really work to be a local hotspot, too. This way, if the hotel is out of your price range or doesn’t work for your stay, you still get to experience the historic building and ruminate on the local history.

Also, the rooftop bar has the best view from the building, so even if you don’t need to grab a drink, I still would suggest making your way up there.

Places to Eat Nearby

If you get your fill from the hotel restaurant and room service, here are some suggestions for local restaurants that I thought were amazing.

He was there just going about his daily business, so you never know who you’re going to run into when hanging out downtown. This restaurant is just down the street from the hotel.

Similar to Milwaukee’s Public Market and the Midtown Global Market in Minneapolis, The Pizitz Food Hall is a collection of food stalls showcasing cuisine from all over the world. You can grab a wide selection of cuisines, from Israeli to Ethiopian to Hawaiian food. I picked out a burrito (naturally) from Choza Taqueria. You can get here with a quick walk from the hotel.

The restaurant is swank. Maybe even Swank. Highlands Bar & Grill is one of those restaurants where everything is delicious and you feel important when the (James Beard Award-winning and Esquire magazine-appearing) Chef Frank Stitt stops by your table to say ‘hi.’ Everything was delicious, especially the foie gras.

The menu was a mix of Southern and French cuisine, which makes sense when you hear Chef Frank’s culinary background. This restaurant is a six-minute drive from the hotel, but it’s worth it, I promise.

And when in Alabama, order grits!

Okay, The Heavenly Donut Co. is about a fifteen-minute drive from the hotel, but I promise you it’s worth the drive. I stuffed my face with three chocolate donuts, but they also have tons of other donut varieties plus cinnamon rolls, apple fritters, and on Saturdays they have beignets!

How Much is a Room at the Elyton Hotel?

Because prices for hotels change so frequently, you can check prices for the Elyton Hotel on Booking.com for updated rates.

Would I Recommend the Elyton Hotel?

Um, yes, absolutely and without hesitation. I can highly recommend a stay at the Elyton Hotel. Of course, where you stay when you travel is entirely dependant on your budget, companions, and travel style, but this place was wonderful with a little bit of something for every type of traveler.

Even if you don’t end up checking in yourself, you can still go up to the rooftop to grab a drink and appreciate being on one of the most fascinating and important intersections in the United States.