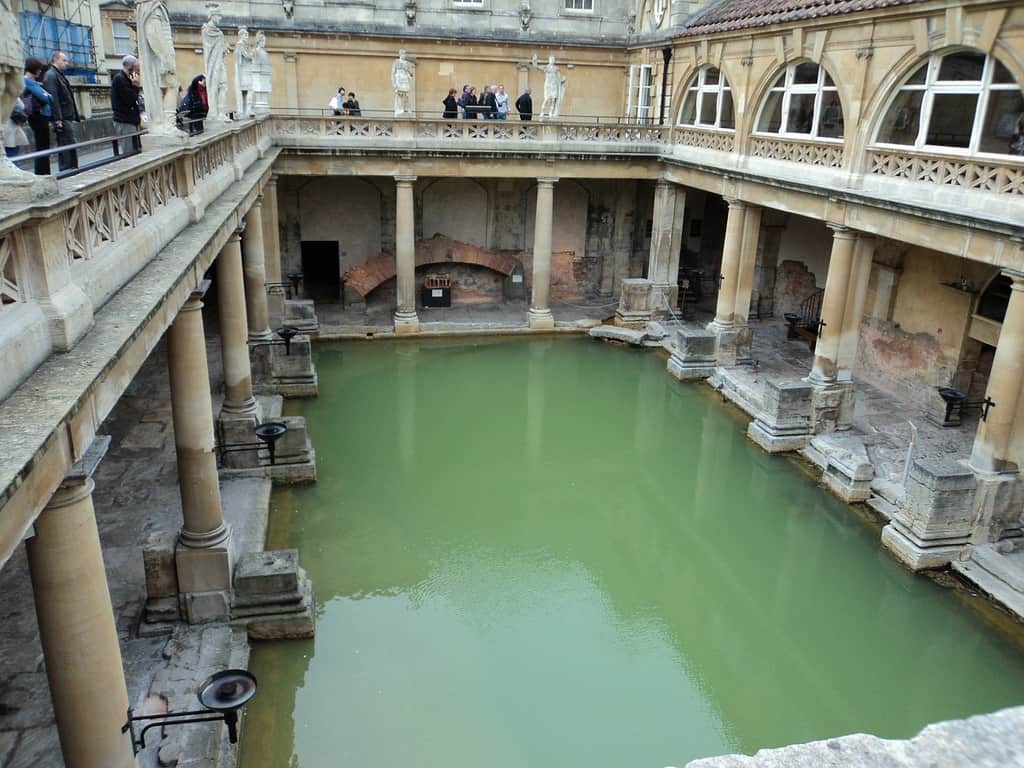 The town of Bath in England is famous for many things. It was the setting for one of Chaucer’s most famous stories from The Canterbury Tales, “The Wife of Bath’s Tale,” it was a Georgian pleasure town and its hot springs have attracted people to it since Neolithic times. However, for most history lovers, interest in the town begins with the Roman baths and its status as one of the most fascinating Roman ruin sites in Great Britain. My guest today is David Crowther, host of the History of England Podcast. We talk about how the Romans came to Britain, why they were interested in Bath, and what happened to the town in the years since they left.

Dipping a toe in Bath

When David was a kid, he went on a school trip to Bath, and as he says, he followed the grand tradition of school kids not being interested in the subject of a field trip. But then the Bath Museum got in touch, and he went back and realized it was, in his words, “the most stunning town and the most stunning museum.” Bath is the second-most visited town in England, and David tells us why: It was built out of gorgeous yellow limestone, the environment surrounding the town is gorgeous, and it has the famous Roman baths. So as David says, it’s really several things at once, and they all recommend a visit.

The Romans first invaded Bath in 56 B.C., when Julius Caesar was fighting the Gauls, and many of the Gauls were escaping into Britain. David says the myth has it that Caesar invaded Bath, “realized he didn’t have the right kid, declared victory and ran away.” He says there’s a lot of truth to that myth, but regardless, Claudius came after and did the job properly. What’s interesting is that at first, Romans just shipped everything over to Bath, and it wasn’t until the third century that they truly began to make a real society and a mixed and varied economy. By the third and fourth century, the Romans start putting in a lot of work on the complex. It’s a religious complex, with a priest presiding over it. But by 420, after years of invasions, Roman Britain is, as David says, “absolutely dead.”

How the monument came to be

It’s a little strange for modern people to imagine a temple in a public bath, but the Roman baths were holy places, as well. As David tells me, the gray ruins we see now bare little resemblance to the colorful places Roman baths used to be. He provides a great picture of what you would have seen if you had prayed at the altar in, say the fourth century. The deities in that particular temple included Minerva. But what’s fascinating is that the Romans incorporated the deities into the temples. So while Minerva is a prominent Roman deity, Sulis, a Celtic goddess was also worshipped at Bath.

The many “careers” of Bath

While there was some attempt to preserve the baths, eventually the city falls to pieces, as David says, and by the time Henry I comes along, the baths are completely gone. And Bath underwent numerous transformations after that, including as the setting for one of Geoffrey Chaucer’s Canterbury Tales. And then, in the 18th century, it became a posh spot, and that’s the city you see today when you visit. The original Roman baths were rediscovered in the 19th century, and excavation continues to this day. It sounds like an amazing place to visit, and David provides some great suggestions for where and how to see it today.

You can visit as a day trip from London, or you can spend some time in the area. Beyond the Roman Baths, you can enjoy hiking in the Cotswold, local gin tours, and the beautiful surrounding villages.