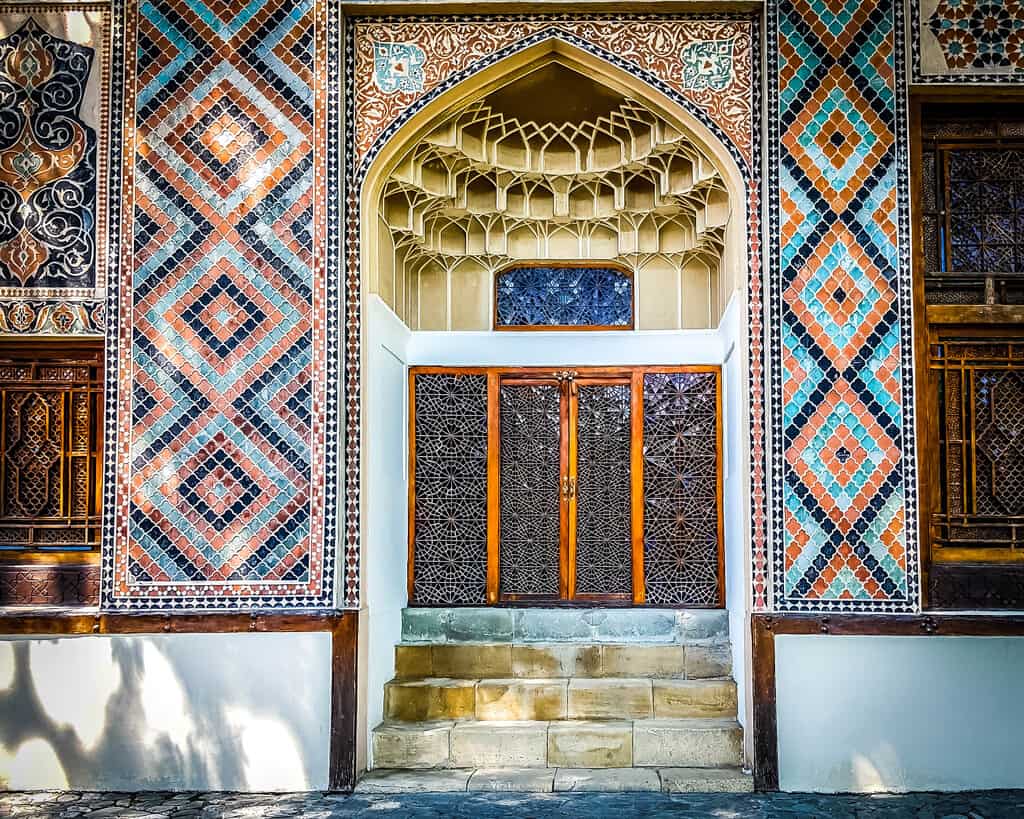 I’m obsessed with traveling Azerbaijan, and I completely believe that you should be, too.

However, the most unpleasant experience we had during our two weeks in the country was getting from Ganja to Sheki by marshrutka.

Even though I’m a huge fan of traveling in these kinds of minibusses all over the world (Tunisia’s are especially fantastic!), riding in one in Azerbaijan was truly terrible.

Below is an account of how our trip went, what the costs were, and what you should know before you make the trip yourself.

Although, if there’s a large bus available when you need it, I would do that instead.

Read next:  21 Things to Do in Ganja, Azerbaijan

See also
21 Things to Know Before You Rent a Car in Baku, Azerbaijan

Getting to the Ganja Bus Station: Simply Terrifying

When we arrived in Ganja from Baku we had gotten dropped off near the edge of town, but the marshrutkas leaving for Sheki take off from the Ganja International Auto Station.

Note that the place listed in Wikitravel is not the same place where we actually got dropped at and left from for Sheki.

The marshrutkas for Sheki were behind the Ganja International Auto Station, but Wikitravel listed it as Ganja Bus Terminal / Yevlax Avtovağzalı / Evlax Bus Station.

It’s possible that buses for Sheki also leave from there, but none of the locals we asked for information suggested we go to Yevlax.

However, before we actually got to the International Auto Station, we nearly died.

I’ve mentioned several times that Azeri drivers be cray, but our taxi driver from the hotel to the bus station was simply nuts.

He split lanes, rode people’s taillights, honked when anyone drove a normal speed, went thirty over the speed limit, and generally terrorized everyone in our path.

My friend’s hands were shaking the entire time, and I grabbed onto the ceiling handle as hard as I could. When we whipped into the bus station, I nearly cried tears of joy.

I was actually just transitioning from one kind of hell into another, but I didn’t know it at the time.

Oh, and while that taxi ride should have been fifteen minutes, it lasted only eight because he was truly a maniac.

Read next: What to Pack for Azerbaijan: an Azerbaijan Packing List for Women and Men

Taking the Mashrutka from Ganja to Sheki: Costs and Logistics

The marshrutkas for Ganja were waiting behind the actual bus station. Our taxi drove us where we needed to go to find it and helped up get our bags to the bus.

He wasn’t a monster, just a seriously frightening driver.

The ride from Ganja to Sheki is about two and a half hours with no stops, so we loaded up on bus snacks at the stand in the yard near the marshrutkas.

Once at the right vehicle, we paid four manats each (about two euros).

These tickets were purchased at the marshrutka and not at the ticket window, and we were never given a paper ticket.

We put our backpacks in the back (though we seemed to be the only travelers on the bus because we were the only two with packs.

There were two guys who put auto parts back there for transportation, but no other luggage).

Here’s where things start to get unpleasant. We’d arrived almost an hour early since we were told that buses tend to leave as soon as they’re full, and the 4:30 pm bus was the last one to Sheki.

We also hoped that if we got there early we could pick out our seat, but, alas, this was not to be.

While we were only the third and fourth passengers to arrive, we were laughed at when we tried to pick out where to sit.

Instead, we were told we had to sit in the back next to the other two people who were already there.

The bus was starting to get hot in the sun, and the window next to our seats barely worked.

I propped it open with an empty Coke Zero bottle that I kept twisted at the right angle with my elbow.

One strange thing I noticed here that I haven’t seen anywhere else (although I haven’t used marshrutkas in the rest of the Caucasus, just Ukraine and Moldova) is that they stuffed three extra people into the van.

Each of the rows that normally have an aisle now had a little temporary seat and a person there instead, turning the van into a flying death trap.

Safety-wise, I’m not sure which is worse: the mad taxi or a bus with zero exits that would definitely explode after a crash.

The Ride from Ganja to Sheki: a Hotbox gets Hotter

After waiting the hour crammed into the back, the bus was full and it was time to go. For about the first five minutes of the trip, everything was fine.

There was a lot of air circulating from the windows at the front, and the driver seemed to be sticking to driving in straight lines.

Shortly after, though, the woman in the front row window seat slammed her window closed.

The circulating air died instantly, and no amount of asking/pleading/hollering in either English or Russian could convince her to open it back up more than a sliver.

We spent the rest of the two and a half hours roasting in the back of the marshrutka/sweat lodge.

About twenty minutes after she shut her window, the driver started splitting lanes and swerving to avoid potholes, and we never drove in anything approaching a straight line again.

During the trip, we made no official stops. We did pause for about five minutes for the driver to smoke a cigarette. As we approached Sheki, we started making frequent trips to pick people up and drop them off for short-distance travel.

Arriving at the Sheki Bus Terminal

We poured out of the marshrutka, grabbed our backpacks, and sat down to see if we could walk to our guest house.

Since we had Azeri sim cards for data but no minutes, we couldn’t call the guest house to get a quote for how much a taxi should be.

We’d been hoping to just walk there without needing a taxi.

Alas, it was a bit too far from the Sheki Bus Terminal since the house was all the way at the other side of town, and we needed a taxi.

See also
How to Get from Sheki to Tbilisi and Vice Versa: Well that was Terrifying

That was easy enough since five taxi drivers flocked to us the second we got out of the van, and they literally stood over us until we admitted that we needed one.

We paid five manats for the ride, and I have no idea if that was a good or a bad price. It was probably about right, but if you have the ability to ask a local then you should do so before you get there.

The Taxi to Our Guest House

The driver didn’t know the exact route, so he called ahead and talked to the owner.

The ride was pleasant, if a bit bumpy since there is a ton of construction going on in Sheki right now. Although we weren’t sure the five manat price was the right one, the ride itself was pleasant and our taxi driver was very nice.

Ganja to Sheki by Mashrutka Total Costs and Time

Taxi from our Hotel to Bus Station: 10 manats

Two tickets on the Mashrutka:  8 manats (4 manats each)

Taxi from the Sheki Bus Station to Guesthouse:  5 manats

Taxi from Hotel to Bus Station: 10 min. (including wait time)

Waiting at the Bus Station: 1 hr.

Mashrutka Ride: 2 and a half hrs.

Taxi from the Station to Guesthouse: 15 min.

The Ganja to Sheki Bus Schedule and Alternatives

I know the marshrutkas leave at 1:30 and 4:30 daily, though you need to arrive earlier because they will leave when they fill up.

As of now, there’s no morning bus. When we asked locals what the times were, however, we were told different things by different people. Wikitravel is also not up to date.

The worst-case scenario is that if you get stuck, a taxi should cost around 50 manats or less, depending on your bargaining skills.

In retrospect, I really wish we’d asked the driver who took us to Lake Goygol to take us to Sheki afterward and saved us the sweatbox.

Getting from Sheki to Ganja

To get from Sheki to Ganja, you’ll work this process backward, but there are a few things to know beforehand.

The buses theoretically run daily at 8 am, 8:30 am, and 1:30 pm. However, just like the other way, get there early because the bus leaves once there are no more seats.

There are a few shops in the same parking lot as the bus station where you can buy snacks beforehand.

Make sure you always have water with you on a hot day!

Drivers and the people working at the ticket windows do not typically speak English.

The signs in the windows for the destination will be written in Azerbaijan with the Azeri alphabet. This will look like Gance or Gəncə. If headed to Sheki, look for Şəki; also Seki or Shaki.

Bring water and any necessary snacks with you since you will not stop. If it’s a hot day, prepare to need extra water.

Show up early since the bus will probably leave as soon as it’s full.

Expect for a bus that should seat 16 to be stuffed with 19-20 passengers, blocking the aisles and exits.

More Information about Travel in Azerbaijan

What to Pack for Azerbaijan: an Azerbaijan Packing List for Women and Men

How to Get an Azerbaijan Sim Card

How to Get from Sheki to Tbilisi and Vice Versa

Many people who travel Azerbaijan combine it with a trip to Armenia and Georgia:

See also
21 Things to Do in Ganja, Azerbaijan Plus Bonus Ganja Travel Guide

Armenia Packing List: Everything You Need to Pack for Armenia for Women and Men

How to Get an Armenian Sim Card

How to Visit Geghard Monastery

The Dry Bridge Market: the Funky Tbilisi Flea Market with History on Display

How to Get from Sheki to Tbilisi and Vice Versa

What to Pack for Georgia: The Ultimate Georgia Packing List for Women and Men

Have you traveled from Ganja to Sheki? Are you planning to travel in Azerbaijan? Leave any questions and your best Ganja to Sheki travel tips below!

Pin this Article for your Trip to Azerbaijan

1 thought on “How to Get from Ganja to Sheki and Vice Versa: Well that was Unpleasant”