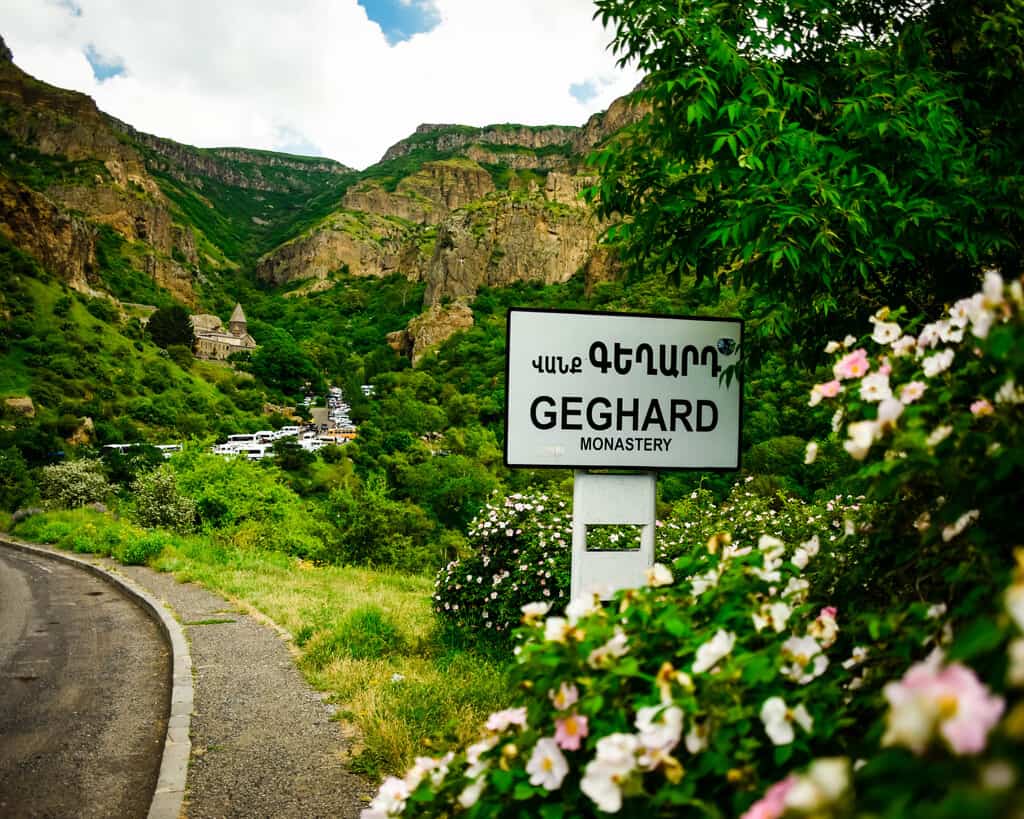 A day trip to the UNESCO World Heritage Site of Geghard is one of the most popular trips from Yerevan. Here’s everything you need to plan your own trip to this monastery.

More of a Spiritual Oddesey than a Day Trip

Since I find myself visiting Orthodox monasteries and churches often, I know what the usual scene at these are: some tourists (maybe a whole lot of tourists or maybe just a couple of others) lighting candles, some beautiful artwork, me standing as far away as possible within the monastery walls trying to get the full complex in one shot, some nuns or a priest or two chatting while trying to get something done, and vendors outside hawking icons and snacks.

However, Geghard Monastery was this and a whole lot more.

While there I got self-baptized in a holy spring, saw a chicken being slaughtered, witnessed a bachelorette party getting a private tour, listened to an extemporaneous choir of elderly Armenian women, and nearly twisted my ankle.

So yes, visiting Geghard Monastery was a completely different experience from traditional, even textbook, monastery visits I’ve been on in the past.

An Introduction to Geghard Monastery

Situated in Armenia’s Upper Azat Valley, east of Yerevan, Geghard Monastery is a complex of churches and caves which began to be important in the fourth century, but many of which were built later during the thirteenth century. Its original name, Ayrivank, means monastery of the cave, and you can see of these to this day. The name used now, Geghardavank in Armenian, means the “Monastery of the Spear,” after the relic of the spear used to stab Jesus during his crucifixion which Armenians believe is owned by the monastery.

Geghard Monastery and the Upper Azat Valley form one mixed Since I have far more interest in visiting monasteries over nature, I didn’t do any research about the valley before arriving, which turned out to be a huge mistake. The greenery of the cliffs offsets the stark gray of the stone, while the valley below is a lush and verdant. Beyond just enhancing the appeal of the monastery (Armenia doesn’t lack for impressive churches perched on the edge of cliffs), the valley is a natural wonder unto itself.

The monastery of Geghard and the Upper Azat Valley contains a number of churches and tombs, most of them cut into the living rock, which illustrates Armenian medieval architecture at its highest point. The complex of medieval buildings is set into a landscape of great natural beauty, at the entrance to the Azat Valley. High cliffs from the northern side surround the complex while the defensive wall encircles the rest.

Armenia is believed to be the first officially Christian country since Christianity became the official religion of Armenia in 301 AD. This was thanks to the work of Saint Gregory the Illuminator, who had been forced to flee to modern-day Turkey. During this time, he was introduced to the teachings of Jesus Christ, and, years later, he brought them back with him to Armenia. His goal was to convert the King Tiridates III of Armenia, and thus force the conversion of the entire country. While he was imprisoned for over a decade, eventually he won the king over, and Armenia became the first officially Christian country. St. Gregory built Geghard’s Monastery, called Ayrivank at the time, as one of Armenia’s first and most important places for Christian learning.

Arriving at the monastery, I found the site overwhelming and didn’t know where to focus my attention. There were the typical souvenir stands and food booths lined up outside. Monasteries all over the Caucasus, even the most remote ones, are such a powerful draw for tourists that they have their own roadside economies.

Unfortunately, very little remains from the earliest versions of the monastery complex due to damage that was done in the tenth century by the Seljuk Turks. The complex you see is all from the twelfth and thirteenth centuries, with a bit from the seventeenth. Of course, the holy spring is the same one that’s been flowing here since the original days of Gregory the Illuminator.

The main church is called Katoghike. It contains a number of the rock-cut churches and other important spots in the complex. Built in 1215, today it is mostly gray with decorative rock carvings. However, it used to be covered in a number of colorful frescoes.

After entering Katoghike, you will step into the Vestry, called the Gavit. The area is dark with a dome at the top that lets light through into the chamber. Here you’ll find gorgeous carvings, lots of visitors taking photographs, and places for people to light candles for loved ones.

This was my favorite place to visit inside of the monastery’s walls. The rock-cut chapel is where the holy spring flows into the monastery. Because of this, and because the acoustics here are stellar, local choirs frequently come in to sing. While I was visiting, I saw a choir of local women performing in the small, enclosed room while visitors lined up to drink from the spring.

I decided to line up to visit the spring. My first thought was just to be in line so I could get a photo of the spring, but the chapel was so dark that it was difficult to get a good shot even with a super high ISO. Afer watching about a dozen people drink from the holy spring, throw water on themselves, and fill water bottles to take back home with them, I got inspired. When I was at the front of the line, I awkwardly walked the final few steps across

While the chapel was built in the twelve hundreds, the spring has been considered holy all the way back to the Bronze age and served as a pilgrimage site before the monastery was built.

The chamber on the right of the Gavit contains rock carvings symbolizing the Armenian royal family. Seeing the carving of two lions was another highlight of my visit.

Keep exploring and you’ll see another rock-cut church with a beautifully decorated altar. While I was there, I found a family celebrating their First Communion.

Considered one of the greatest achievements in medieval Armenian church architecture:

One of the most remarkable achievements of the Middle Ages in Armenia is this edifice, along with the Avazan Church and the upper gavit. Entirely carved by hand, and taking more than 40 years to complete, the structures are especially impressive for the way the architect chose to carve the structures; from the top down. The difficulty in doing this cannot be over stressed, nor the sheer act of faith the architect and builders showed in undertaking such a gigantic task. 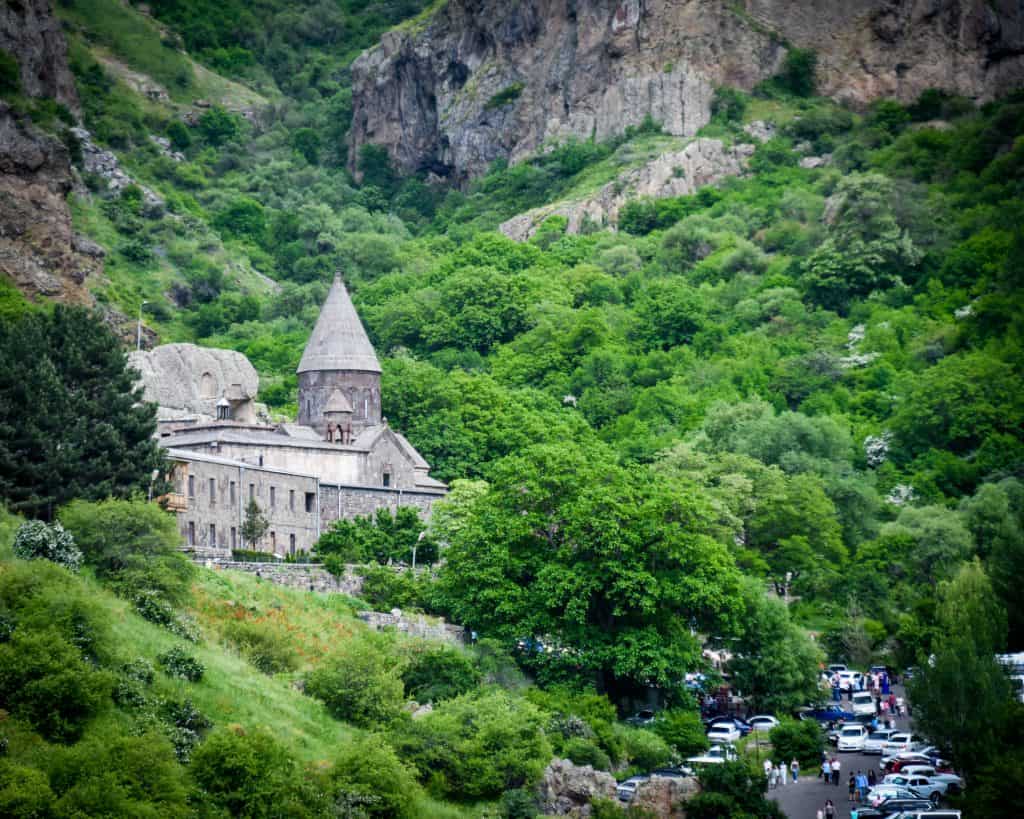 How to Get to Geghard from Yerevan

Geghard Monastery is located by the town of Goght, Armenia. There are three primary ways to get to the monastery from Yerevan:

Yerevan to Geghard by Taxi

This was the method we took. Using Yandex, we popped in Geghard, the Temple of Garni, and Khor Virap monastery, plus a return trip to the city with a drop off at our favorite Thai Restaurant. Heads up that if you do it this way, the driver only sees the next stop instead of all requested stops. This ended up being a small problem when we went from Yerevan to Tbilisi. (Read:  How to Take a Taxi in Yerevan, Armenia).

Our taxi experience was wonderful. Our driver was a real sweetheart who also spoke great English.

See also
Armenia Packing List: Everything You Need to Pack for Armenia for Women and Men

Day Tour from Yerevan to Geghard

If you don’t feel comfortable taking a taxi or you’d like to make sure you get some background information while you are there, I recommend taking an organized day tour.

Yerevan to Geghard by Public Transportation

Marshrutkas are a popular way to get around the Caucasus. Most marshrutkas leave from the train station but double check beforehand since they’re split up over a few different spots in the area. Marshrutkas leave when they fill up.

It is possible to get to Geghard by public transportation, but I didn’t personally go through this and this post with the instructions is from a trip the authors made in 2013. If you are going to use the buses to get to Geghard, double check with locals that the routes are good.

How to Get Into the Monastery

There is no entrance fee to visit the churches in Armenia, so you won’t need to purchase a ticket to get into the complex. Just walk past the souvenir and food stands, and you’re good to go.

Things to do Near Geghard

The Temple of Garni, a rebuilt ancient Roman Temple, is nearby on the Azat river valley. It’s so common for visitors to see Geghard and Garni at the same time, that there are tons of tours designed to make sure you visit both. If you take a taxi like we did, just add both stops in your Yandex app (which allows for up to four stops).

The obvious drawback to going via taxi is that you don’t get any information about a site while you’re there. If you choose to do a tour, this Garni-Geghard tour has great reviews and most specifically mention how great the guide was at providing lots of background information.

See also
Armenia Packing List: Everything You Need to Pack for Armenia for Women and Men

Many people who travel Armenia combine it with a trip to Azerbaijan and Georgia:

Have You Visited Geghard Monastery in Armenia? Are you planning a trip to Geghard soon? Leave your best tips for visiting the monastery and any questions below!

Pin this Article for Your Trip to Armenia