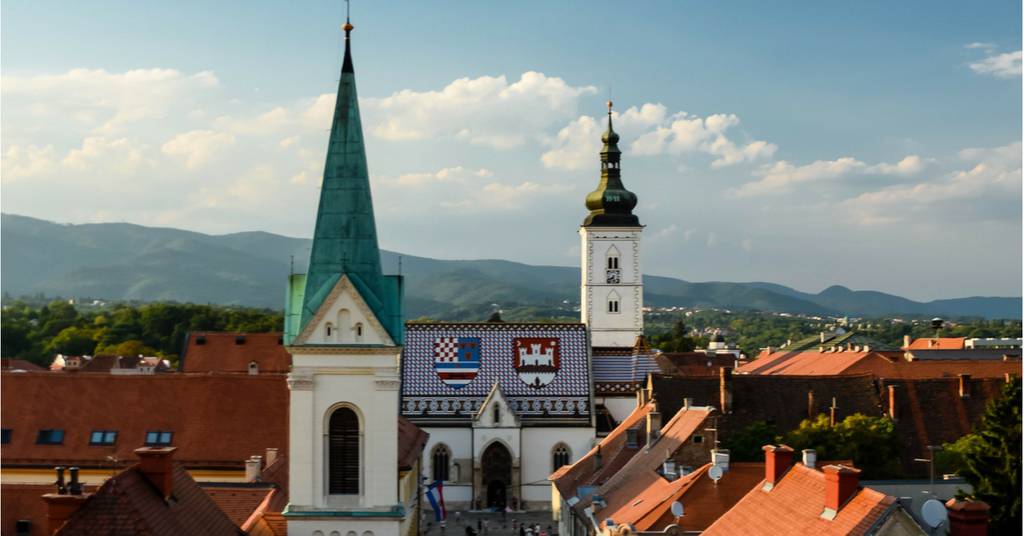 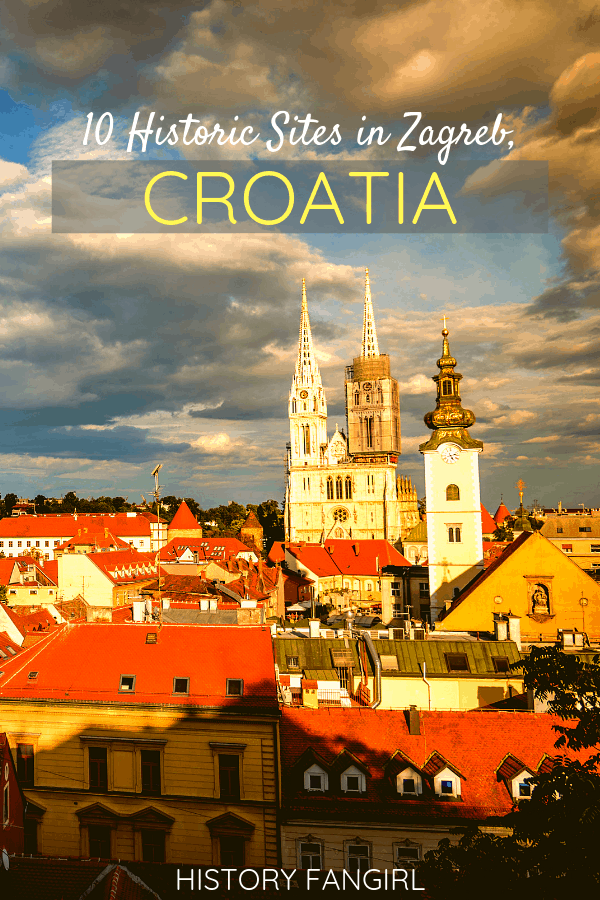 The city of Zagreb, Croatia boasts many important historic sites, many of which are beautiful works of architecture in different styles, colors, and representing different historical periods. When I visited the city last month, I met up with Irena from Local Guddy, a service where travelers can book personal guided tours hosted by locals. We went on a walk through the city focused on the stories behind some of the most interesting and historic places in Zagreb.  (Touring more than just Zagreb? Check out this Croatia road trip itinerary or these fabulous day trips from Split).

The Art Pavilion in Zagreb is a canary yellow Art Nouveau building near the train station. Built in 1897 for the Budapest Millenial Exhibition to show off Croatian art at the event, it was moved to Zagreb and reconstructed at the Exhibition’s conclusion.  It served as an important symbol of Croatian culture, hosting the Croation Salon and other important modern art figures.

“Against this broad horizon of historical artistic events, from the influx of new ideas, movements and tendencies, to linguistic and stylistic formations and the artistic trends of later Modernism, which expanded over the European cultural space like seismic waves, the Art Pavilion was and always has been a dynamic scene of events, a relay and a live visual stage on which for more than a century the roles of the main actors have been exchanged, ideas fermented and the artistic oeuvres of the main figures and participants in modern and contemporary art have been promoted.”

Sitting the aptly named St. Mark’s Square, St. Mark’s Church is one of the most iconic buildings in the city. The body of the church is Romanesque and dates back to the 13th and 14th centuries. The decorative tiled roof was added in the 19th century. The roof has two coats of arms: on the left is the combined symbols of Croatia, Dalmatia, and Slavonia. On the right is the coat of arms for the city of Zagreb.

Today the square hosts Croatians dressed as historic figures, but in the past, the square had a much darker use:

Croatian-Hungarian king Bela the IVth allowed for fairs to be held on the square and in front of the church. In front of the church a pillar of shame existed, where people were tied and punished by court orders. On the same spot, Ambroz Matija Gubec, leader of the peasant rebellion was “crowned” with a scorching iron crown.

Rising above the city, Lotrščak Tower dates to the 13th century. Today it looks much like it did back then:

Every day at noon, a cannon is shot from the tower. This tradition dates back to the 19th century.

The tradition is connected with a local legend:

“a cannon shot from the Lotrščak tower soared over the river Sava and landed in the Turks’ encampment, right on a platter of chicken that was being carried to the Pasha for his lunch. The Pasha decided against attacking a city of fearsome sharpshooters so Zagreb escaped invasion. Since this ace shot was fired at noon, a cannon has been fired at that time from the same tower ever since.”

Whether or not this legend is true, seeing the cannon go off makes this one of the most fun historic sites in Zagreb. The tower is open during the day, and for a small fee you can climb to the top and take in aerial views of many of the other historic places in Zagreb.

Officially named the “Cathedral of the Assumption of the Blessed Virgin Mary,” Zagreb Cathedral is a massive Gothic church towering over the city.  Besides being one of the most important historic places in Zagreb, it’s also the tallest building in Croatia. The original structure dates back to the 13th century, but it’s been rebuilt, repaired, and reimagined multiple times over the centuries.

Inside you can see a wall showing the Glagolitic alphabet, the original precursor to Cyrillic, frescoes from the 13th century, and the grave of Cardinal Aloysius Stepinac.

The museum was opened in 1952 to celebrate the works of untrained and self-taught Croatian artists. It has operated under several names, starting as the Peasant Art Gallery.

Many might not think of a museum as a historic site per se, but this was the first museum in the world dedicated to Naive art:

Naïve art became particularly popular in Croatia, where working- and middle-class people from the villages and countryside created the artwork that would form the first two major schools (the Earth Group and the Hlebine School) recognized in the movement.

A stunning example of 17th-century Baroque architecture, St. Catherine’s is less famous than Zagreb Cathedral or St. Mark’s Church, but it should not be missed. The church was built by Jesuits in the first half of the 1600’s, but, due to damage in two fires, much of the interior artwork dates from the following century.

The name translates to “at the Black Eagle,” and it’s located right by the Stone Gate. The pharmacy, dating to the 14th century, is the oldest in Zagreb.

Beyond being the first pharmacy, it also boasts the most famous pharmacist in Croatian history.  Niccolo Alighieri, the great-grandson of Dante Alighieri, worked here. Today the pharmacy is a popular tourist location, but it’s also still a working pharmacy.

The central square in Zagreb is dedicated to Josip Jelačić, a Croatian national hero. During the communist era when Croatia was a part of Yugoslavia, the square was renamed Republic Square in an attempt to diminish Croatian national pride.

The square has a long, sometimes dark history. The name for the city of Zagreb is believed to come from the springs that run under the square:

The Manduševac Fountain was built above a natural spring that provided Zagreb with drinking water right up until the end of the 19th century. Court records about the persecution of witches mention the spring as their main meeting point. There is also a legend connecting the spring with the name of the city. Namely, one sunny day an old Croatian war leader was returning from battle tired and thirsty, and asked a beautiful girl Manda to scoop up some water from the spring for him. The Croatian word for “to scoop up water” is “zagrabiti”. So the spring got the name Manduševac, after the girl, and the town got the name Zagreb after the scoop of water.

Today the square is both an important historic site in Zagreb, and also the city’s central meeting point and vibrant cultural center.

Built in the 13th-century, the Stone Gate is one of the only pieces remaining of the original walls around Gradec and one of the most important historic places in Zagreb. Inside is a shrine to the Virgin Mary which began with what many believe is a miracle:

Throughout the city’s long history it has undergone many reconstructions and was devastated by fire more than once. The last such fire destroyed much of Gradec on 31 May 1731, burning down houses that were close to the Stone Gate. The Gate displayed a painting of the Mother of God, which was miraculously undamaged by the fire. To commemorate the event, grateful citizens built a chapel within the arch of the old Stone Gate. The chapel, which still houses the painting of the Mother of God, has since become Zagreb’s biggest shrine and is regularly visited by people who come to light a candle and thank the Lady for protecting them.

When arriving in Zagreb via the train station, it’s impossible not to notice the grand, art nouveau Esplanade Zagreb Hotel.  Now a site for fancy brunches and expensive vacations, the history of the hotel was much darker than its fancy appearance would suggest. Opened in 1925 as a place to stay for passengers riding the Orient Express, it served as the local headquarters for the Gestapo during World War II:

1925 – 1940 The Hotel was the center of the social life of Zagreb. It offered unseen luxury to the guests. All personalities coming to Zagreb, stayed at the Esplanade – Josephine Baker, Charles Lindbergh, kings, politicians, artists…The Esplanade was famous for elegant and refined balls of the high society.

1940 – 1945 During the war the Hotel was headquarters of Gestapo and Wermacht. Curzio Malaparte stayed at the hotel and wrote here his famous novel. Several waiters have been involved in spying on Germans for partizans. When they have been discovered, they have been shot.

If you’re looking for more to do after visiting Zagreb, head west to any of the countries beautiful UNESCO World Heritage Sites and the spectacular coast, or head east to travel through Slavonia to see one of the least touristed and most off-the-beaten-path parts of the country.

Thank you to Local Guddy for sponsoring me on this tour of historic sites, and thank you to Irena for showing me so many of the great historic places in Zagreb!

Pin This For Your Trip to Croatia