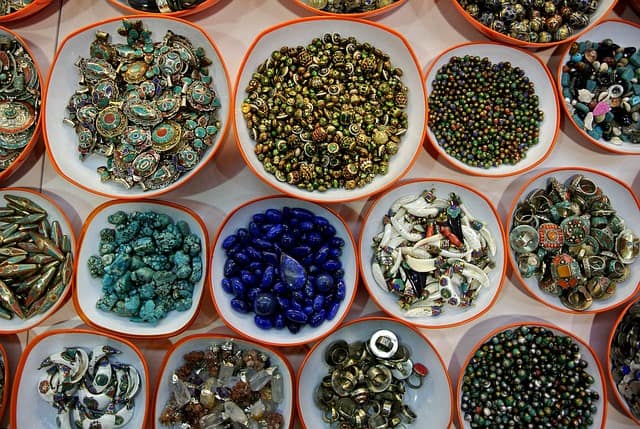 Traveling throughout Europe, you can find the legacy of the Ottoman Empire just about everywhere. But if you want to experience a place that has lived through the ebbs and flows of the empire, and connects us through more than 500 years of history, you need to visit the Grand Bazaar of Istanbul. My guest on today’s show is Chris Mitchell, of the travelingmitch blog, who until recently lived in Istanbul, and knows his way around its landmarks. As Chris told me, while some things have changed about the giant shopping district, many things haven’t. And if you want to learn about a country, especially a country as rich in customs and commerce as Turkey, you head to the bazaar.

Chris told me the Grand Bazaar was first built in 1455 and was really up and running the 1460s. Known as the “House of Gems,” the giant, covered warehouse became home to 3,000 vendors (not too far off from the 4,000 that populate the spot today). The Bazaar was the creation of Mehmet II, the emperor in the mid-15th century, who saw the opening of the warehouse as a means to raise money for the Hagia Sophia, the place of worship nearby. The bazaar attracted interested parties from all across Europe, and helped establish Turkey as a center for commerce and trade, as manufacturers, traders and various trade guilds sprang up around it. There were (and still are) mosques in the warehouse, as well.

See also
The Walls of Constantinople

[bctt tweet=”If you’re curious about the #history of the Ottoman Empire, you have to see Istanbul’s Grand Bazaar.” via=”no”]

The Grandness of the Grand Bazaar

The 30-hectare space contains two bedestens, or covered markets, the first one being built shortly after the first, once they saw how quickly the Bazaar was expanding. There are 18 gates to enter, and 61 streets inside. As Chris told me, the Bazaar became more than a market, it became a symbol of Ottoman control and a testament to the empire’s reach. There were goods available there that simply weren’t elsewhere, and it became fashionable around Europe to have something from the Ottoman Empire. But, as the Ottoman Empire’s influence began to wane, and it began to lose control of lands across Europe, that was reflected in the commerce happening inside the bedestens.

[bctt tweet=”.@travelingmitch knows #Istanbul inside and out, which is why he takes us inside its Grand Bazaar.” via=”no”]

The Grand Bazaar in the 20th Century

After World War II, Mustafa Kemal Atatürk became the founder and first president of the Republic of Turkey. He pushed for Turkey to become a secular nation, one that put more emphasis on research and development, and—as Chris said—aimed to catch up with its European neighbors. But Atatürk recognized the need to honor the history of the Ottoman Empire, so he had to walk a fine line. He saw many of the structures from the past were important to the country’s future, so even as he pushed for the modernization of the country, he preserved its heritage. All of which helped make the Grand Bazaar the destination it is today.

Traveling to the Grand Bazaar

As Chris told me, in 2014 more than 400,000 visitors a day passed through the gates of the Grand Bazaar. That number has likely dipped, with a tightening on tourism to Turkey. But Chris gave listeners great tips on other destinations around the Bazaar and around the city, so if you can get a visa, it’s worth making a trip to the bustling shopping area. “Make sure your haggling skills are sharp,” Chris says, and be ready to consume more chai tea than you thought humanly possible. Because this beautiful, historic, teeming shopping district is a living reminder of the grandness of the Ottoman Empire.

See also
The Walls of Constantinople

[bctt tweet=”Our friend @travelingmitch joins us to share #Istanbul traveling tips, and dive into the history of the Grand Bazaar.” via=”no”]

The prize for this week is a $20 Amazon gift card! To enter, simply be a newsletter subscriber and leave a comment on this blog post. The contest ends Sunday, November 5 at midnight.