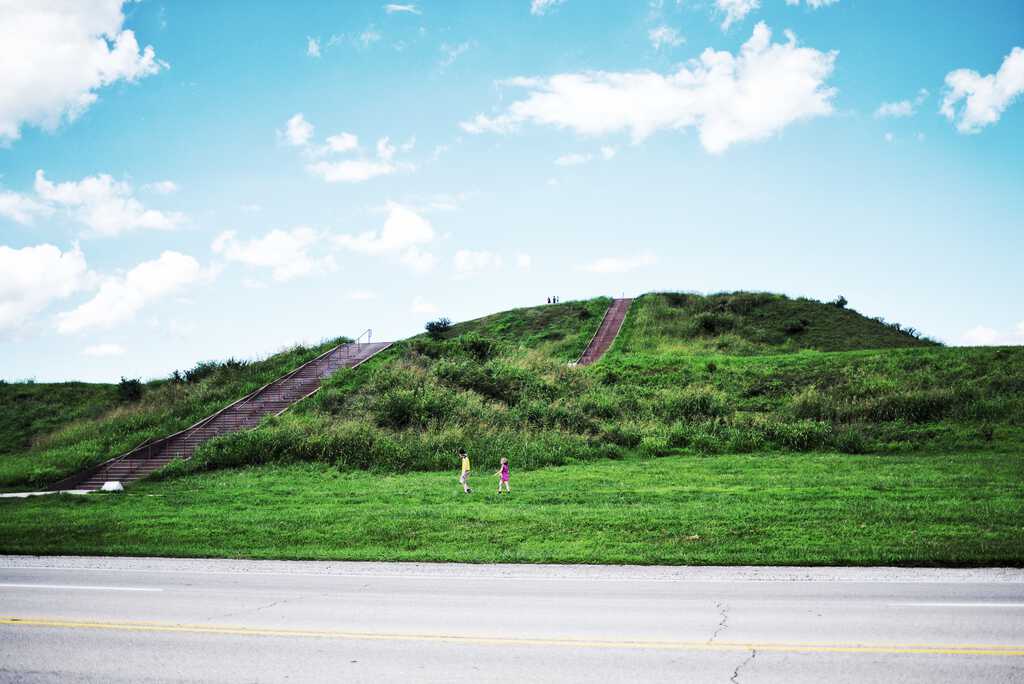 Listen to the Episode “The Lost City of Cahokia”

If you ask most Americans about the history of their country, they’ll start somewhere around 1492, or maybe even 1776. But before the pilgrims and before John Hancock, of course there were large, thriving civilizations of Native Americans. One of the most notable communities was in Southern Illinois, not too far from St. Louis: Cahokia, a Mississippian community of some 10-20,000 Indians, with perhaps twice as many living around the urban area. Who were the people who lived there? What have archaeologists discovered about their culture? To answer these questions, I chatted with Bill Iseminger, assistant site manager at Cahokia Mounds and the man who literally wrote the book on the historical site.

Cahokia Mounds: The largest city you never heard of

According to Bill, Cahokia Mounds was the largest prehistoric Indian community in America. The first signs of civilization date it to around 1050 AD, and the city thrived for about 150 years. Cahokia proper comprised of six square miles with more than 120 mounds. Bill first came to the site in the late 1960s, when he was finishing up his master’s degree, and received an offer to assist on a dig. He started digging, and never really stopped, and the archaeological site is still active with excavations just about every summer. And the artifacts they’ve found there has profoundly influenced what we know and think about ancient American Indian cultures today.

The city at the center of it all

The Cahokia tribes flourished largely thanks to the tremendous natural resources at hand. The site sits at the confluence of the Mississippi, Missouri and Illinois rivers, meaning the soil was rich for agriculture, and transportation made trading with other tribes easy. Bill told me they’ve found seashells from the Gulf of Mexico and arrowheads from Indiana. In fact, he told me that one presumed leader of Cahokia was buried with more than 1,000 arrowheads, with materials and styles from across America, signaling that perhaps tribes from all over paid tribute to the leader. We don’t know much about some aspects of their culture because they didn’t have a written language, but Bill and his colleagues have been unearthing mysteries with every dig.

The size and scope of Cahokia

The historical landscape of Cahokia is fascinating. Monks Mound, the largest pre-Columbian earthen structure in North or South America, stands 100 feet tall and stretches 14 acres. The people who lived there would have had to move 22 million cubic feet of Earth to make such a structure. They also constructed “woodhenges,” circular monuments made of timber, that would have helped them track the calendar—solstices and equinoxes, but their own important dates as well. And to defend their city, they built huge stockade walls, made up of as many as 20,000 logs cut from thousands of trees. We know because of the size of the houses that the Mississippians who lived in Cahokia largely stuck to the nuclear family structure. But the society was very hierarchical. Likely, whether you lived inside or outside the stockade said something of your status. So why then, if Cahokia was so well protected and on such fertile land, did the city eventually come to an end? I’ll let Bill fill you in on that.

The unfolding legacy of the Cahokia Mounds

Today, Cahokia remains one of the richest archaeological sites in North America, and one I highly recommend you add to your list to visit. If you plan your trip right, you can even help with an excavation, either doing the actual digging or just cleaning off the findings. The Cahokia Mounds are incredible monuments to the prominence and sophistication of those early American Indian civilizations. So why don’t more people know about them? As Bill jokes, “There’s something about piles of earth that’s not as exciting to people as piles of stone.” But I think that’s something that will change for anyone who tunes into this episode.

See also
23 Marvelous Things to Do in Mountain View, Arkansas