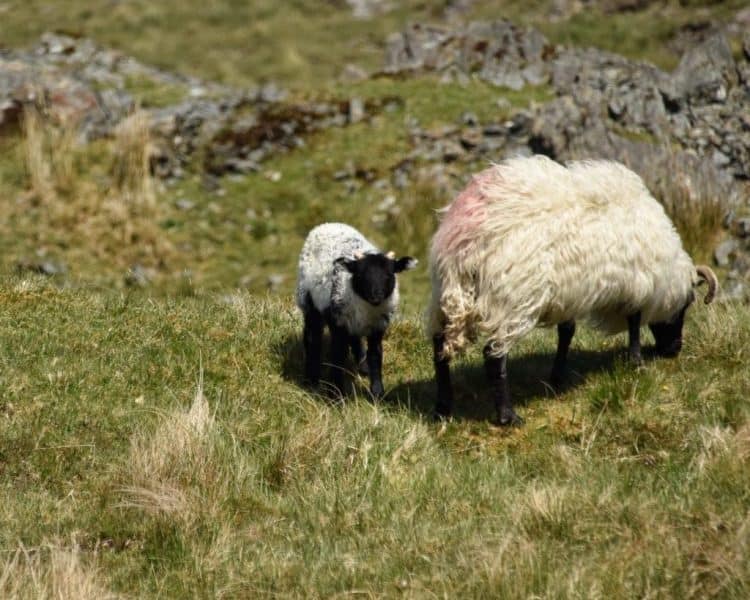 I am absolutely in love with the Emerald Isle. I’ve spent about a month road tripping everywhere from Belfast to Galway, from Connemara to Dingle, and everywhere in between. While I know that I can’t wait to go back to Ireland again and again, I’ve seen enough beautiful Irish cities and landmarks to fill a stack of photo albums (if I ever got around to printing my photos). Here are my favorite Irish photography spots and my picks for the most Instagrammable places in Ireland and Northern Ireland to help you plan your trip.

Read:  What to Pack for Ireland & Northern Ireland

The Most Instagrammable Place in Ireland & Northern Ireland

The Dark Hedges in Country Antrim

Famous as the shooting location for the King’s Road in HBO’s Game of Thrones, this tunnel of beech trees was planted at the end of the eighteenth century as part of the entrance to the local estate. Haunted by more than the ghost of King Joffrey, these hedges have their own ghost known as the Grey Lady.

Be prepared to be patient to get your shot. Between fickle Irish weather and other tourists, you may find yourself waiting while others do their own Instagram poses. I lucked out and showed up when there was only another backpacker, so we took turns.

There are beautiful fields in the area, so if you come with your own car give yourself extra time for roadside photography.

This Georgian-era square park is one of the most famous city parks in Dublin, and it has a number of beautiful and interesting photography spots to experiment with as well as being a great place for people watching.

I was shown this place while on a photography tour with Dublin Photo Tours. Darren walked us through the city, showing us cool Dublin photography spots and helping us improve our shots. I highly recommend him if you’re looking for on-location photography lessons during your trip to Ireland. Check out his Facebook page for more info.

Going on the Slea Head Drive on the Dingle Peninsula is a must if you’re in the area. On my first trip to Ireland, we did the entire peninsula drive, stopping as we went to photograph the gorgeous landscape as we went. Of course, I fell in love with all of the beautiful sheep and other Irish baby animals we spotted on the drive.

This was my very first Guinness in Ireland, and that about one million Guinnesses ago. But there’s always something special about your first, right?

While there are many (many, many, many) great pubs all over Ireland, I do think that Dick Mack’s has a certain charm. Yes, it’s a bit touristy, but it’s also charming. The owner, Oliver MacDonnell, was actually born in a room above the pub and has lived there for his entire life. It doesn’t get much more Dingle than that. It’s one of my favorite things to do in Dingle.

Cliffs of Moher in County Claire

Possibly the most iconic Instagram spot in Ireland, if you’re on the west coast you really do need to spend a day here. You can walk the cliffs at the top or you can take a boat ride at the bottom, or you can do both!

Please pay attention to your footing here, and remember that safety comes before Instagram. Always.

Who wouldn’t want to come to Ireland and stay in an Irish castle? Well, at Castle Leslie you can live your Irish Castle dreams, along with exploring the beautiful lake and church on the estate. Plus, the food here is over-the-top amazing.

If you’re looking for the most Instagrammable hotel in Ireland, Castle Leslie is at the top of my list. Check pricing, reviews, and availability here.

This neoclassical style building is the seat of the Parliament of Northern Ireland. I actually snapped this pic with an iPhone from the top of a red  Hop-On Hop-Off City Tour which also took us around through some of the best street art in the city. You can check tour prices and reviews here.

See also
The Storied History of the Guinness Storehouse

This UNESCO World Heritage Site is comprised of thousands of hexagonal basalt columns. If you go, wear shoes with good friction because the columns are slippery if they’re even a little wet.

This luxury four-star hotel in an 18th century Castle is a great place to simply stroll the grounds, but it also has stunning bedrooms and gardens. When I was there guests were arriving for a wedding, in all of their beautiful finery. It was like stepping into an Irish fairytale.

Looking for an Instagrammable Irish hotel? You can check pricing, reviews, and availability here.

Belfast Cathedral, technically named Saint Anne’s, proudly displays the largest Celtic Cros on the island of Ireland. This is the Roman Catholic Cathedral of the city.

Newgrange is one of the three sites that make up the UNESCO World Heritage Site Brú na Bóinne:

…is dominated by the three great burial mounds of Knowth, Newgrange and Dowth. Surrounded by about forty satellite passage graves, they constitute a funerary landscape recognised as having great ritual significance, subsequently attracting later monuments of the Iron Age, early Christian and medieval periods.

This traditional Irish farm in Kenmare, Co Kerry is a blast to tour, but the adorable (and super sassy) farm animals are my favorite part of the experience.

This formerly abandoned castle stands in ruins over the coast. Even though it was raining when I was there, seeing it in person was absolutely magical.

The Ring of Kerry is a famous drive around southwestern Ireland. This spot is part of the area known as Ladies View in Killarney National Park:

The view here is probably the best known of Killarney and is a major attraction for visitors. Queen Victoria’s ladies-in-waiting visited here during the royal visit in 1861. They were so taken with the view that it was named after them.

The Seven Churches on Inishmore

I’m on the record saying that visiting the Aran Islands was my least favorite part of traveling in Ireland. I hated the ferry over (and I usually love ferries), and there just wasn’t enough time when we were there to see much. That being said, I loved seeing the ruins of The Seven Churches while touring the island.

The Boyne River in County Meath

This view is in the Newgrange park on the walk from the museum to the bus pickup. Make sure to give yourself time to stop and admire the view before you have to get picked up or leave.

Driving through Connemara National Park, I think we had to stop to pull the car over one billion times per hour because everywhere we went the views were fantastic. Nothing beats this little baby sheep though. I have a hard time going to Ireland and not just loading up my SD cards with pics of baby animals. Especially if I’m there in the spring.

Perhaps the quintessential Ireland Instagram spot, Kylemore Abbey is a sight to behold. Yes, you’ll be competing with a million other photographers, but the way the water is situated in front of the abbey means that they blissfully won’t be obstructing your shot.

If you’re looking for the most Instagrammable hotel in Northern Ireland, my pick is Ardtara Country House. My room had a fireplace, which made me feel like a princess when it was lit. I’m not alone in loving the place since it’s been voted the most romantic hotel of the year (twice). Check pricing, reviews, and availability here.

There’s something so spectacular about seeing a windfarm on the horizon, and this sunset driving by the wind farm outside of Galway my first night in Ireland was extra special.

Longueville House is a beautiful 18th-century Georgian country house outside of Cork. If you’re looking for an Instagrammable hotel to stay in while in Cork, check pricing, reviews, and availability here.

Aughnanure Castle is a defensive tower built in the sixteenth century, but my favorite part was the pasture with all of the foals, calfs, and their mamas lounging in the sun.

This might not look like a typical castle, but that’s because it’s a mix of styles. The walls are from the original sixteenth-century castle, while the roof is from the Georgian period after a fire destroyed the original roof. When we were visiting, we were the only tourists on the lawn. Imagine having this view all to yourself!

See also
101 Things to Do in Ireland: Bucket List for Your Irish Vacation!

This is another great Dublin photo spot that Darren showed us on the Dublin Photo Tour. I think this was on the Grand Canal between Wilton Terrace and Mespil Road, but I’m not one hundred percent sure of the exact spot. Check out Darren’s Facebook page for more info if you’re interested in going on a photo walk with him.

I adore buildings that are made with truly outstanding brickwork, and you really can’t find any better in Ireland than on South Great George’s Street. This was taken at the intersection

I got to see the adorable seals in Kenmare Bay on a Seafari. Cruising in the bay to find these amazing animals sunbathing was so phenomenal. If you go, I recommend bringing a good zoom lens so you can get in close.

I spotted this rainbow in County Meath, but I can report that after a month total driving time around the country that you can find gorgeous views nearly wherever you go on the island. If you decide to go on an Irish road trip, be prepared to spend extra time pulling the car over to get photos since nearly every turn is picture-perfect.

The Colorful Buildings of Dingle in County Kerry

Dingle is a sweet little town in the southwest of Ireland. Famous internationally as one of the Star Wars filming locations and the setting of the movie Leap Year, it’s far more interesting than just its Hollywood connections. I love the colorful buildings (wish I had spent more time photographing them up close), but there are many hidden photography spots all over town if you have the time to find them.

Read: 23 Spectacular Things to Do in Dingle & Bonus Travel Guide

Most people choose to get a selfie or photo of themselves on the edge at Dun Aengus overlooking the cliffs, but honestly standing even a few feet away from the edge made me sick to my stomach. My favorite picture from visiting Dun Aengus on Inishmore ended up being these picturesque fields during the hike up to the top. However, if you do choose to do a cliffside pic, be careful. Safety first, people.

You might not think of an airport as the best place for an Instagram photo, but if you like documenting your trip from beginning to end then you really can’t do better than the green Irish fields at the Shannon Airport. I’ve flown through Dublin, Belfast, and Shannon, and Shannon is my favorite photography spot of the three.

5 Things to Pack for Your Trip to Ireland

Note: While the vast majority of my Ireland travels have been self-funded, several of these photographs were taken while being hosted by Failte Ireland, Visit Belfast, and Ireland’s Blue Book. These three organizations are passionate about promoting travel in Ireland, and I am grateful to have worked with them to photograph some of these stunning locations. In addition,

Pin this Ireland Instagram Guide for Your Trip to Ireland 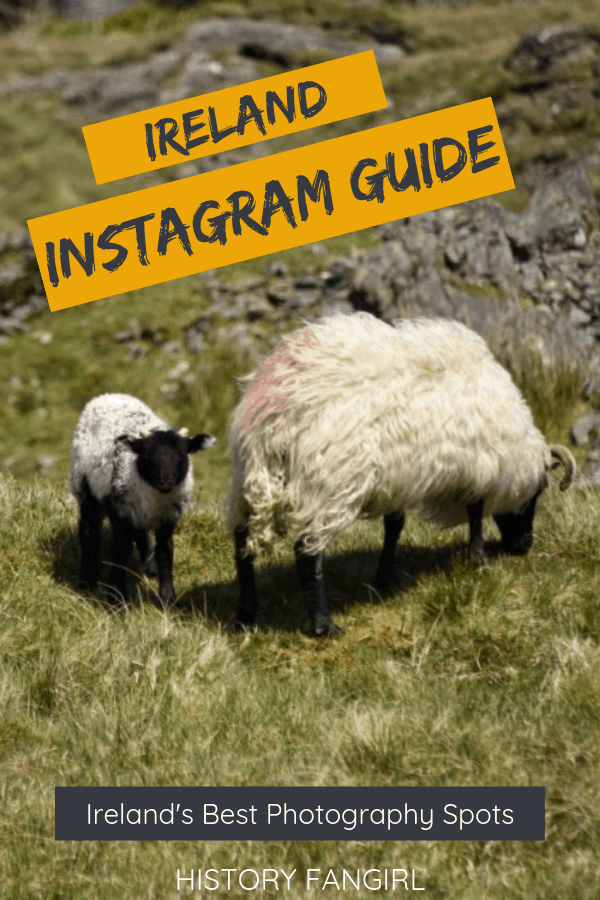