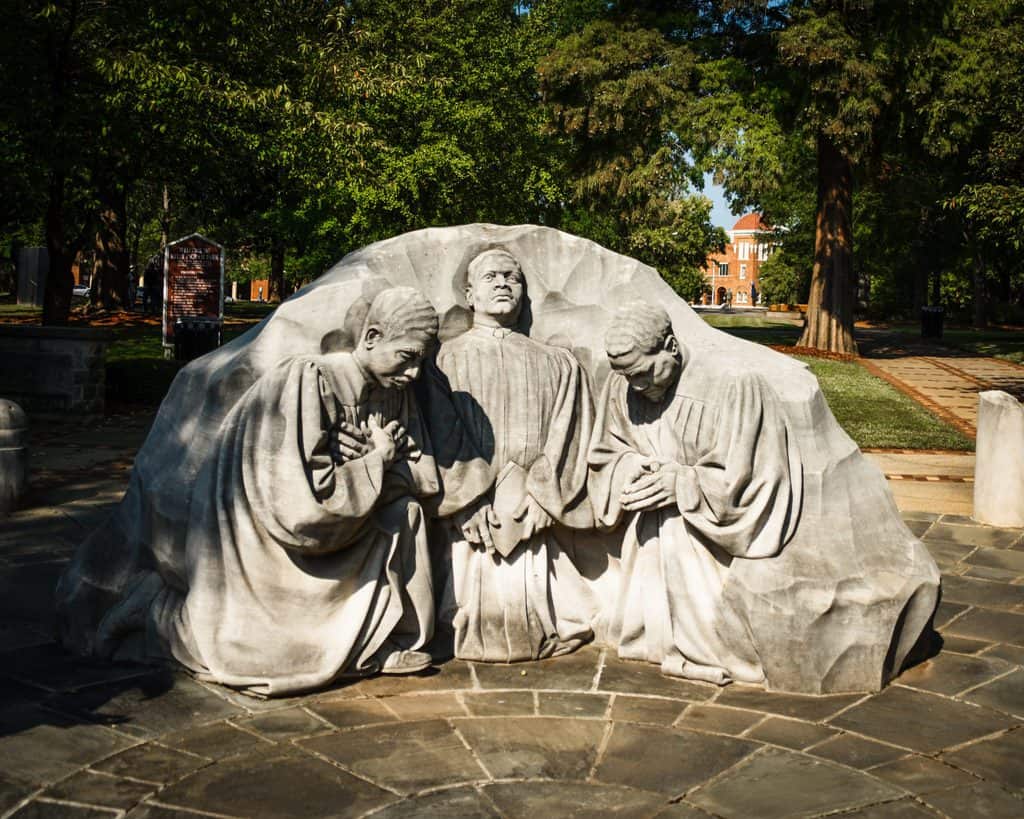 Named a monument under President Barack Obama in 2017, Birmingham Civil Rights National Monument was established to preserve the Civil Rights Movement. Many key events, including the Birmingham Campaign happened on this site and currently, this park is governed by the US National Park Service. One of the major sites in this monument is the motel that used to serve as the headquarters for the Civil Rights movement.

On your trip, you can check the amazing statues along the road and visit other sites of interest including the A.G Gaston motel, 16th Street Baptist Church, Kelly Ingram Park, and the Birmingham Civil Rights Institute.

Freedom Riders is another national monument administered by the US National Park Service. Located in Anniston, this site was designated a national monument in 2017 by former President Barack Obama. This park tells the story of the Freedom Riders and highlights their role in the Civil Rights Movements. In 1961, some segregationists including Ku Klux Klan members attacked and firebombed a bus carrying the freedom riders at the Aniston Greyhound Bus Station.

Some sites that interest visitors here include the bus sites in Anniston, the field where the Greyhound bus was attacked, and the hospitals where the injured Freedom Riders were sent to. And if you are in for more activities, you can check out the Zinn Park dedicated to Martin Luther King.

Horseshoe Bend is a 2000-acre military park; a  perfect spot for lovers of history.  The park preserves the battle of the Horseshoe Bend and overlooks several interpretative structures.

According to records, this park came into existence in 1956 to honor the moment Major General Andrew Jackson’s 3,000-man army attacked Chief Menewa’s 1,000 Red Stuck Creek warriors in the horseshoe-shaped bend of the Tallapoosa River.

While you are here, start by learning about the history of the war and events that took place in Alabama from the Visitor’s Center. You can also tour the road through the battlefield, and take in the beautiful scenery at Tallapoosa River.

Little River Canyon National Preserve has to be one of the popular and finest attraction sites in Alabama. Located in Fort Payne and established in 1992, this 15,228-acre preserve protects a very deep canyon east of the Mississippi, and the Little River which is believed to be the longest mountaintop river in the country.

You can start your visit by stopping at the Canyon Center to learn about the Canyon. Next, tour the site to observe views of the mountain scenery, waterfalls, rare plants/animals, and a whitewater river where people try kayaking.

Visitors also love the Little Rivers Falls, a 45-foot waterfall with a sight that’s just incredible. There are hiking opportunities in this preserve, and you can also drive through the 23-mile long Canyon Rim Parkway which features 8 incredible overlooks of the canyon. Lastly, the whole family can enjoy the fun as the Canyon Mouth Park offers a great place for a picnic, and there are many eateries/shops in the parking lot.

Prepare for a beautiful scenic drive along the  444-mile Natchez Trace Parkway. This road stretches from Natchez, Mississippi to the South-west of Nashville, Tennessee so you will be driving through 3 states. Natchez Parkways highway follows the historic corridor used by Native Americans, soldiers, slave traders, European settlers, and future presidents. Today, this site offers a beautiful spot for different recreational activities especially driving, hiking, biking, fishing, and camping.

Visitors can stop by at the Farmhouse where many animals like horses and sheep graze the pasture. Horse lovers can also enjoy horseback riding and stop at Sacred Way Sanctuary which has a museum and wildlife preserve that highlights the relationship between the horse and native Americans. There are a lot of restaurants along the route, including those that serve fine Southern Dishes and desserts. And if you need a place to rest your head, you would find many hotels along with the towns.

This scenic trail is linked to the Natchez Parkway and unlike many trails, it features several segments instead of just following a continuous path.

Meanwhile, what Natchez trail lacks in length, it makes up for in beauty and activities options. It has different paths that highlight many historic experiences and offers incredible scenery.

Through your drive, you will come across different spectacular views, including beautiful overlooks, forests, bubbling springs,  waterfalls, and Rock Spring Nature Trail.

Hidden away in Northeast Alabama, this archeological site features a geologic formation named Russel Cave. This cave was formed millions of years ago and inhabited the Native Americans within 10,000 BC to 1650 AD.  Now, Russell Cave highlights the cultural developments of the North American inhabitants. Some of the excavated artifacts and pottery from the site are in the Visitor Center where visitors can view them.

Russell Cave is the third-longest in Alabama and ranks 90th longest in the country. Unfortunately, visitors can’t go deep into the cave but can walk to the entrance, follow the stream, and see how a million-year-old cave provided shelter to the natives. You can also make your trip more fun by trying out their incredible trails.

This  54-mile historic trail commemorates the groundbreaking Voting Rights March led by Dr. Martin Luther King in 1965. Visitors can connect with history by stopping by at the 2  interpretative centers to hear stories about those that participated in the freedom march. One center is in Hayneville while the other is in Selma.

Visitors are encouraged to follow the route of the marches and walk across the Edmund Pettus Bridge to the National Voting Rights Museum and Institute. There is also a “Whites Only” water fountain where black people were once forbidden to take a sip.

See also
17 Fabulous Things to Do in Arkansas with Kids

The site features many galleries including the Footprints Hall of Fame that shows the footprints of some marchers. Other features on this site include a Jail Cell, Murals, a Voting booth, and many other sites along the trails.

Trails of Tears commemorates the survival of the Cherokee people who were forcefully removed from their lands in Georgia, Alabama, and Tennessee to live in an Indian Territory which is now known as Oklahoma. Most of them traveled by foot, wagon, steamboat, or horse. This trail is the Alabama Portion of the route they passed through during the forceful eviction and an estimated 3,500 Creek Indians died along this trail.

Trail of Tears is about 2,300 miles long and passes through about 9 states over land and water.

On your trip here, you can visit different historic sites, including the Fort Payne Cabin, the home of the Cherokee leader, Andre Ross, and the Wills Town Mission Cemetery.

Located in Moton Field, this national historic trail preserves the contributions of the African American men during World War II. Historically, Moton Field was a primary training base for pilots who were known as the Tuskegee Airmen. It was constructed and named after Robert Russa Moton who was the principal of the Tuskegee Institute who died a year before the establishment of the base.

On this site, you will get to explore two museums. The Hangar 1 museum, which features planes and artifacts of the men and women who served, and Hangar 2, where you can learn about their history through books and short video clips.

The main feature of the Tuskegee Institute National historic site is the Tuskegee University. This institute played an important role in providing higher education and academic programs to African Americans during the Reconstruction Era. This landmark was later named a historic site in 1965.

See also
The 5 Best Neighborhoods in Atlanta + Hotel Guide for Where to Stay in Atlanta, Georgia

Asides from the university, it features other sites including the George Washington Carver Museum Birmingham which recognizes the inventions of some scientists using native plants and agricultural products. The museum also tells the story of George Washington Carver and showcases his contributions and personal artifacts. Another exciting feature in the park is The Oaks, Booker Washington’s home which is always open for tour.