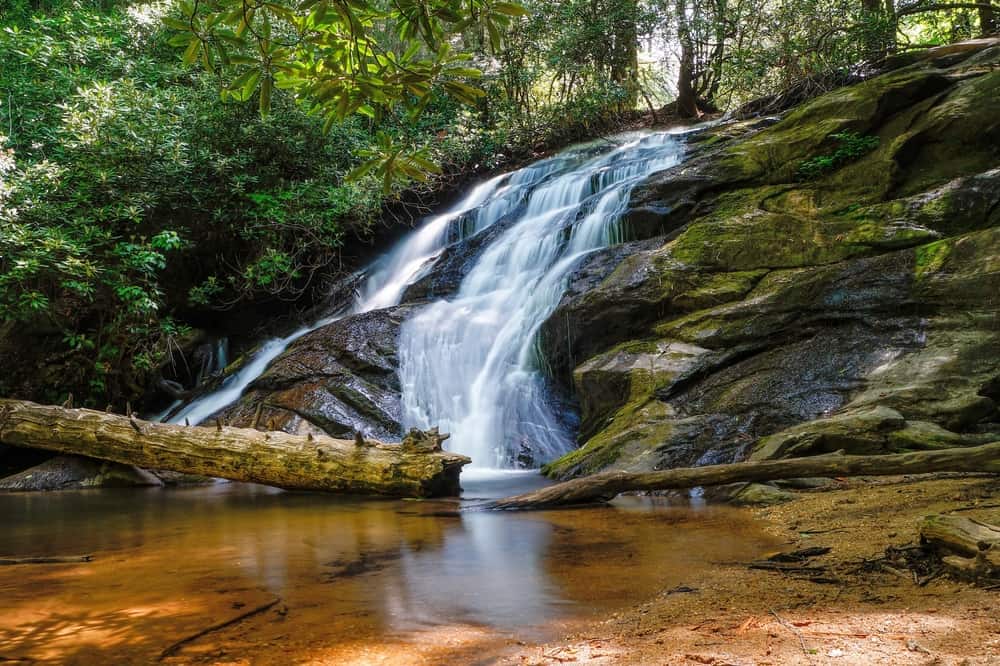 The Anderson National Historic Site is home to the former Confederate prisoner-of-war camp, Camp Sumter. The prison operated from February 1864 until April 1865. The Andersonville National Cemetery, which is still used today, and the National Prisoner of War Museum are also located on the site.

Visit the museum and start by watching two films on the camp and the experiences of American prisoners of war (POW). The museum features interactive exhibits as well as an inside look at what it was like to be a POW. Also, make sure to pay homage to those who have fallen in battle at the Andersonville National Cemetery.

The Appalachian National Scenic Trail or better know as the Appalachian Trail (A.T.) stretches about 2,200 miles from Mount Katahdin in Maine to Springer Mountain in Georgia. This trail is considered the longest hiking-only trail in the world by the Appalachian Trail Conservancy. It’s estimated that over 2 million people hike on at least part of the trail each year.

Georgia’s part of the trail offers hiking of various skill levels. The beautiful scenic views that are along the trail make it well worth the hike. One can also camp along the trail in shelters. How many miles can you go?

The river is a stocked trout stream that can be fished year-round with a Georgia fishing license and a trout stamp. Twenty-three species of game fish can be caught. Fishing isn’t all though. Cochran Shoals, the most popular part of the park, features a 3-mile fitness trail that is wheelchair accessible and also provides great spots for bird and wildlife watching.

Established in the late 1800s, the Chickamauga and Chattanooga National Military Park protects the sites of two important battles during the United States Civil War: The Battle of Chickamauga fought on September 18th-20th, 1863, and the Siege of Chattanooga on November 23-25th 1863.

The park offers ranger-led tours and programs to learn about these battles. Take a 90 minute to 2-hour car tour of the Chickamauga Battlefield. Also don’t miss looking out over the battlefield by taking the Point Park walking tour. Whether a history buff or a casual observer, there’s plenty to be learned about the United States Civil War.

Taking a short break from war History, let’s look at the Cumberland Island National Seashore. The shore covers almost all of Cumberland Island, the largest of Georgia’s Golden Isles. The island, which is only accessible by ferry, is a vehicle-free zone for visitors. Bikes are allowed and can either be brought with or rented.

Those who take the ferry get to spend time on beaches and view dunes, marshes, and fresh-water lakes. Camping is also offered for a maximum of seven days. The Cumberland Island National Seashore Museum is located on the shoreside of the Island and focuses on the rich history including displays of the Timucua Indians and some of the Carnegie family estates.

On Saint Simmons Island, Georgia, lies archaeological remains known as Fort Frederica National Monument. These remains are of a fort and town that were built by James Oglethorpe between 1736 and 1748. About 630 British troops were stationed here to protect the southern territory of the British colony of Georgia from Spanish raids. The outlying town of Frederica housed around 500 colonists.

Explore excavated sections of the fort and colony as you step back in time almost 300 years! The fort is open to the public and admission is free! A zero-cost history lesson awaits!

Nestled between Savanna, Georgia, and Tybee Island, on Cockspur Island, lies Fort Pulaski National Monument. This fort served two purposes during the United States Civil War; it was used by the union army to test rifled cannon in combat in 1862 and also served as a prisoner-of-war camp. The former use made brick fortifications obsolete. The monument, which includes the McQueens islands adjacent to Cockspur Island, was established on October 15, 1924.

Visit the fort to learn and interact with those dressed for the period by taking a tour. The fort has been used to film two movies as well! Can you guess either of them?

In honor of the 39th president of the United States, Jimmy Carter, the aptly named Jimmy Carter National Historic Site sits in Plains, Georgia. The site consists of multiple buildings from Carter’s past including his residence, childhood farm, school, and the town railroad depot. During the 1976 United States presidential elections, the depot served as his campaign headquarters. Due to secret service protection, the area around the residence is off-limits to the public.

The former Plains high school now serves as the visitor center and the old campaign headquarters is a museum. Learn about an important man in the development of the United States.

Turning back to the Civil War, we find Kennesaw Mountain National Battlefield Park. The park consists of a battleground and Kennesaw Mountain. The name Kennesaw comes from the Cherokee Indian “Gah-nee-saw” which translates cemetery or burial ground. The Battle of Kennesaw Mountain claimed the lives of 5,350 soldiers between June 18th, 1864, and July 2nd, 1864. The park was established on February 28th, 1917 to commemorate this battle.

The nearly 3,000 square acre park boasts a museum and theater showing films about the battle fought. There are also 17.3 miles of interpretive hiking trails where one can see historic earthworks, cannon emplacements, and interpretive signs. There are also three monuments.

Honoring one of the most influential civil rights activists is the Martin Luther King, Jr. National Historic Park. About thirty-five acres in Atlanta, Georgia include the boyhood home of Dr. King as well as the original church he was baptized in, Ebenezer Baptist Church. King Jr. and his father, King Sr. served as pastors there too.

The prehistoric American Indian site, Ocmulgee Mounds National Historical Park, is an area of land that many different American Indian cultures occupied for thousands of years. It’s guesstimated that the first American Indians came during the Paleo-Indian Period and hunted Ice-Age mammals. At the start of the Mississippian Period (around 900 CE), mounds for the elite were constructed that can still be seen today!

A large Ocmulgee Indian Celebration is being held in September of 2021 to celebrate the culture and history. Ocmulgee Mounds had the largest archaeological dig in American history where over three million artifacts were unearthed by a team of 800 people!

The Trail of Tears National Historic Trail covers thousands of miles of trails and water routes used during a dark time. Forced out of their homes by Congress’s “Indian Removal Act”, more than sixteen thousand Cherokee Indians started the process of relocation In May 1838. The relocation was cruel and harsh resulting in over 1,000 deaths. The horrible relocation was finished by March 1839. Despite the hardships faced, the Cherokee lived on as a resilient people.

There are museums, interpretive sites, and historic sites along the trail that give information and interpretation for the trail. In Georgia alone, there are over a dozen places one can visit.