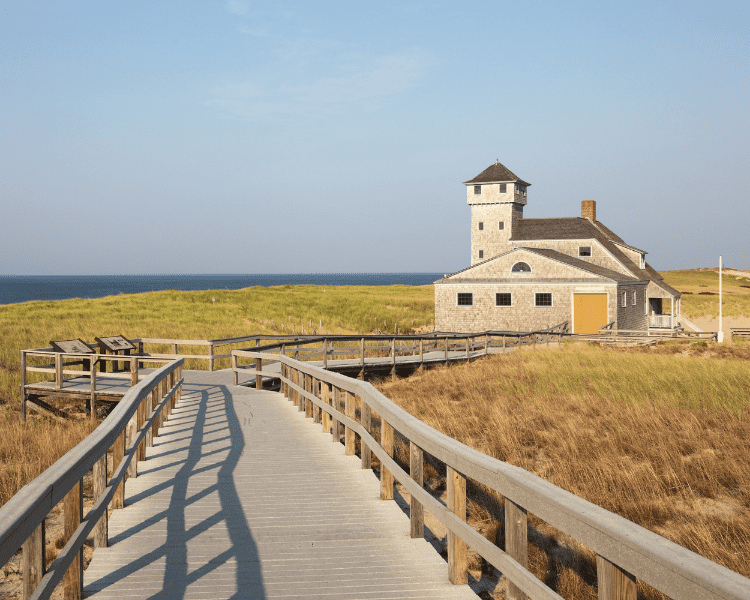 This historical park, formerly the Adams National Historic Site is located in Quincy, Massachusetts. The Park was established to preserve the residence of former United States presidents John Adams and John Quincy Adams. Other notable people who lived here include Charles Francis Adams, Henry Adams, and Brooks Adams. The Park has a total of eleven buildings preserving the history of five generations of the Adams family from the year 1720 – 1927. Visitors to the park will see John Adams and John Quincy Adams birthplaces. There is also a stone library that was built in 1870 which is said to be the first presidential library in the U.S. guests can enjoy a guided tour of the grounds from April to November.

The beautiful Appalachian National Scenic Trail is popularly referred to as the A.T. It is located in eastern U.S and spans over 2,000 miles. The trail cuts through valleys of the Appalachian Mountains as well as 14 American states including New Hampshire, Maine, Vermont, Massachusetts, Georgia, Maryland, Connecticut, New York, New Jersey, Pennsylvania, West Virginia, Virginia, North Carolina, and Tennessee. Since opening in the year 1937, the trail has been a hotspot for thru-hikers as well as tourists from far and wide. Visitors can enjoy activities such as hikes, tours as well as camping. The trail can be used for beginner to advanced level hikes.

See also
23 Cool Things to Do in Conway, Arkansas

Boston played an important role in the American Revolution and the Boston National Historical Park commemorates this. The Park is a collection of eight sites which are all National Historic Landmarks and were designated as a National Park in October 1974. The Freedom trail which is a walking tour of downtown Boston connects seven of the sites. Boston National Historic Park has visitor centers located at Charlestown Navy Yard as well as Faneuil Hall. Guests at the park can enjoy guided tours of the Freedom Trail as well as a Navy-led tour of the USS constitution.

Located in the heart of Boston’s Beacon Hill neighborhood is the Boston African American National Historic Site. This historic site comprises the largest collection of 15 pre-civil war structures owned by the African American community. The buildings functioned as homes, schools, businesses, and churches including the 1806 African Meeting House which is believed to be the oldest black church in the country. The structures are representative of the strength of the black community despite the circumstances at the time. Linking the sites together is the 1.6-mile-long Black Heritage Trail. Visitors can learn about the rich history of the African American community when they visit the site today.

Made up of a collection of islands, a peninsula, and a former island, with 34 islands sitting in the Greater Boston shoreline, the Boston Harbor Islands National Recreation Area is brimming with nature and cultural heritage. Established in November 1996, the area once served as a fort during the Civil War, and today it serves as a National Recreational Area.  Visitors have quite a variety of enjoyable activities to choose from in this National Recreational Area, some of which include climbing the lighthouse, exploring the tide pools, hiking scenic trails, camping, fishing, picnicking, swimming, and more.

Established by President John F. Kennedy in 1961 and popular for being one of Mother Nature’s wonders, Cape Cod stretches about 60 miles into the Atlantic Ocean and is nestled in the outermost section of the Cape Cod peninsula. With magnificent heights of coastal bluffs, a stunning forested pond, a 40-mile beach, and more, it is no surprise that many tourists from far and wide come to experience this beauty for themselves. Visitors and tourists have a number of recreational activities to enjoy here including outdoor activities such as swimming, biking, scenic walks, and fishing. Naturalists will also certainly enjoy discovering the rich ecosystem that thrives here.

This site commemorates Landscape Architect Frederick Law Olmsted who founded American landscape architecture and the nation’s foremost park maker dating back to the 19th century. Olmsted who was born in 1822 moved to Boston in 1883 establishing the first-ever completely professional landscape design office in the world. He later died in 1903, however, his legacy continued to live on with his sons and successors running operations for the company as well as being notable influences in society. The Olmsted family also played an integral role in the establishment of the National Park Service. Visitors can enjoy guided tours of the grounds including the office wing.

Famous for being one of America’s all-time most admired presidents, this National Historic Site commemorates and preserves the birthplace of the 35th American president – John Fitzgerald Kennedy. Today visitors can travel back years in time and experience the early days of the prolific John F. Kennedy. Recreated by the president’s Mother Mrs. Kennedy, the house at 83 Beals was donated by the Kennedy family in the year 1967 with the aim of getting the younger generations to appreciate American history.

Serving as the home to notable American poet Henry Wadsworth for 50 years and then a significant structure in American history during the American Revolution, the Longfellow House Washington’s Headquarters National Historic Site was where President George Washington took command of the Army. It is also the first recorded location where anesthesia was used for childbirth after being administered to Fanny Longfellow. Researchers and guests visit this site for the historical garden, artworks, period furniture as well as the archive present. The site over the years has had a lot of notable visitors including Charles Dickens and Nathaniel Hawthorne.

Located in Lowell, Massachusetts, and established in the year 1978, the Lowell National Historic Site commemorates America’s industrial revolution through textile manufacturing. The historical park is a group of sites around the Lowell area that played a function in the textile manufacturing era. Some of the sites include the Boott Cotton Mills Museum which has an operating weave room of 88 power looms, the Suffolk Mill Turbine Exhibit, as well as Mill girl boarding-houses. Other buildings within the park include worker housing, canals, and commercial buildings. Visitors can explore the grounds by boat, trolly, or on foot. Guided tours are also available.

The Minute Man National Historical Park honors the opening battles of the American Revolutionary War. It serves as home to a number of battle sites of which includes Concord and Lexington. The Park was established in September 1959 and has since preserved the first battles of the American Revolution through restorations and re-enactments. Visitors to this historic park are sure to gain an education on some significant American history. For example, from the Concord North Bridge, guests can see the place Colonial militiamen fired the very famous “shot heard ’round the world.” There are several other significant sightings scattered across the park for visitors to learn about.

With a length of 215 miles, the New England National Scenic Trail cuts across over 40 districts in Massachusetts and Connecticut. This trail was established about 50 years ago and is a combination of three trail systems – The Metacomet, Mattabesett, and Monadnock Historic trail systems (M-M-M). Visitors come to see this trail for a variety of reasons, with several colonial landmarks, it is rich in American history. The trail is also teeming with wildlife and natural resources such as waterfalls, forests, lakes, mountains, and more. In 2009, the trail was extended by 22 miles east of the Massachusetts Metacomet-Monadnock trail. Visitors enjoy activities such as hiking and scenic walks along the trail.

In March 1938, The Salem Maritime became the first National Historic Site established in the United States. This historic site consists of 12 historic structures, a tall-ship replica, and approximately 9 acres of land along the waterfront of Salem Harbor. The Salem Maritime National Historic Site commemorates the port which American ships passed through when transporting cargo to Asia. The site was established as a way of preserving the maritime history of the U.S and New England. Today, visitors can experience ship and walking tours of the historic site.

Located approximately 10 miles from Downtown Boston, the Saugus Iron Works National Historic Site commemorates the first integrated ironworks in North America. It was founded by John Winthrop the Younger in 1646 and ran operation till 1670. The National Historic Site includes preserved and reconstructed structures like the blast furnace, rolling mill, forge, shear, slitter, a 17th century home, and more. The entire facility is able to run from power generated from seven large waterwheels. The site highlights the role iron-making played in American history.

Preserving the site of America’s first armory is the Springfield Armory National Historic Site. The site houses the world’s largest collection of American military small arms, it was built in the year 1778. Springfield started out as a major arsenal under George Washington’s authority during the Revolutionary War. Eventually, in 1794, the armory began manufacturing muskets. In a few decades, the armory became a key manufacturer in the American industry. About two centuries after its launch, the armory closed operations, in 1978, however it was reopened and till today remains the world’s largest collection of U.S. military firearms.

This 600-mile-long historic trail was explored by General George Washington and the French Lieutenant General Comte Jean de Rochambeau of which it is named after. Together with their armies and joining forces, they formed the largest battalion to fight against the British Army. The battle is today known as the American Revolution. The troops marched along the trail from Newport into Yorktown, eventually scoring a victory and achieving independence for America. Today, visitors can experience this site rich with American history and engage in activities such as biking, hiking, as well as boating along this National Historic Trail.