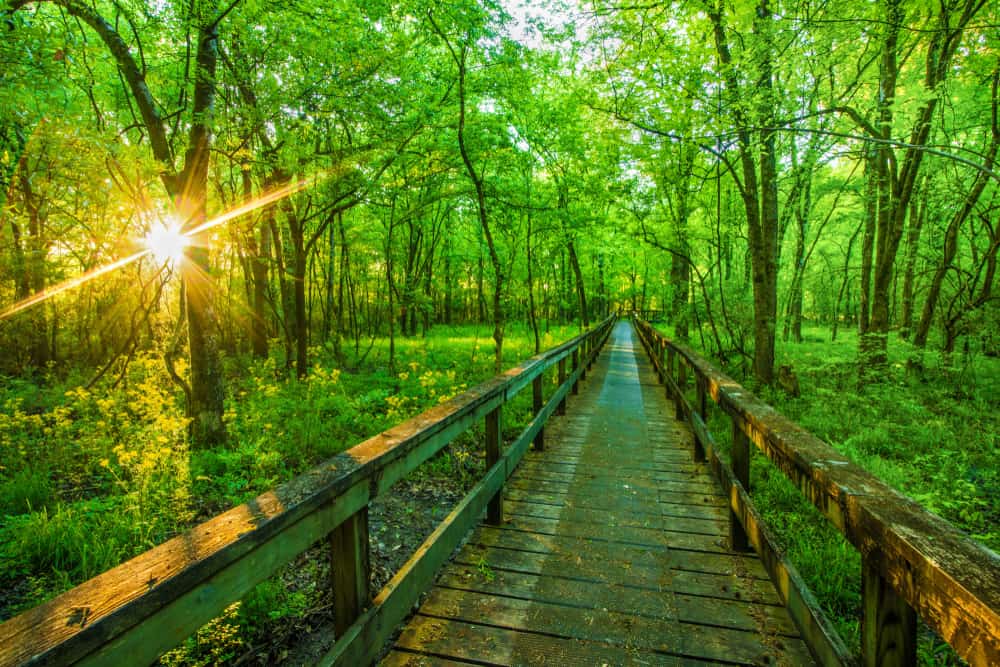 Are you looking for a simple weekend getaway? Then Gulf Island National Seashore is the ideal place for you. Located along the southern Mississippi coastline, the Gulf Island National Seashore offers visitors an opportunity to explore the beautiful historical landscapes and experience the magnificent white beaches, beautiful barrier islands, and emerald coastal waters.

The park consists of different areas for you to explore, offering both indoor and outdoor recreational activities. Cat Island and Horn Island are ideal for those who enjoy wildlife, while the Petit Bois area is ideal for swimming and fishing. The Davis Bayou area offers a variety of leisure activities such as camping, kayaking, fishing and is also a perfect place to have a picnic.

Gulf Island National Seashore also offers you a wonderful chance to observe the lovely sunset on its beaches, a memory that will last for a long time.

Brice’s Cross Roads National Battlefield site is one of the approximately 100 sites and battlefields related to the American civil war. The monument has been in existence since 1930s, and its main objective is to keep in memory the men who fought at the battle of Brice’s crossroads, in which a Major-General Nathan Bedford Forres-led  Confederate army became victorious against a far bigger Union force.

A driving tour of the battlefield gives you insights into the extent and significance of this battle. Several tour stops serve as landmarks, leading you to locations where the brave soldiers made the ultimate sacrifice.

This monument honors the life and work of Medgar and Myrlie Evers, who fought tirelessly through the national association for the advancement of colored people (NAACP) to end social violence for black people in Mississippi. In August 2018, Medgar and Myrlie Evers home was included in the African American civil rights network and in  November 2020, it became a unit of the national park service.

Although the park is currently not open to public tours, there are plans to allow visitors in the coming months. Visitors will have a chance to view the simple 3-bedroom ranch, which was the home of the two great civil rights activists. As one of the American national treasures, the monument will be an ideal place to visit to learn about the life and work of the two great Americans, Medgar and Myrlie, and how they helped shape the nation.

The park allows visitors to learn about Natchez’s rich history, including the European settlement, slavery, the cotton business, and civil rights battles. The park has four different sites; Melrose estate, Fort Rosalie, William Johnson house, and Forks of the Road, one of the busiest slave-trading markets in the Deep South.

The park has something for everyone, whether you come with friends or family.  A driving trip in the park takes you to some significant civil war locations in Natchez. While on tour, prepare to be stunned by some of the most impressive collections of antebellum architecture in the United States. A picnic at Fort Rosalie gives you a magnificent perspective of the fort that once served as the backbone of a European settlement. Take a guided tour of Melrose Estate to learn about the lives of 18th-century cotton landowners and their slaves at this well-preserved estate.

The Natchez Trace Parkway is a 444-mile recreational road and scenic drive that takes you through 10,000 years of history. The parkway conserves the original Natchez trace that was used by the American Indians,  slave traders,  European settlers, and soldiers.

Today, the Natchez Trace Parkway is more than just a picturesque drive. Biking, horseback riding, hiking, camping and walking on the Chisha Foka Multi-Use Trail are some of the most popular recreational activities you can enjoy at the parkway. In other words,  the Natchez Trace Parkway is an excellent place for you to unwind and discover the mystery of the mounds in Mississippi, the cypress swamps and also appreciate flora and fauna.

The Natchez Trace Trail is a national scenic trail that runs parallel to the Natchez Trace Parkway motor road. The trail is about 60 miles long, consisting of five segments namely;  Rocky Springs section, Potkopinu, Yockanookany Trail section, Blackland Prairie Trail and Highland Rim. The trail provides you the perfect environment for activities like horse riding hiking. Visitors get a chance to explore the sights and sounds of the Natchez Trace, which include the ghost town of Rocky Springs, Ross Barnett Reservoir, and the beautiful hardwood forest, among many other features.

This scenic trail provides an excellent opportunity for friends and family members to bond while leisurely enjoying nature.

Shiloh National Military Park is the best place to visit if you would really love to learn about the American Civil War. Through self-guided auto-tour, exhibitions and films, you are sure to learn about one of the first major battles of the American Civil War, which happened at the Shiloh battlefield. The park also has a separate unit at Corinth, where the siege and battle of Corinth is preserved and interpreted. You will also learn about the Corinth Contraband Camp site, where thousands of runaway slaves found safety. The park also has a 10-acre national cemetery that serves as the resting place of over 3,000 soldiers and sailors who took part in the civil war.

If you are a hiking enthusiast, you will surely enjoy the park’s numerous trails, which lead to monuments and tablets found throughout the area. This trail also leads to the magnificent Shiloh Indian Mounds, where you will see the remains of an early Indian settlement. The kids can engage in the Junior Ranger program, which awards them with a Junior Ranger badge upon completion.

Standing at a one-acre area in Tupelo, Mississippi, is the Tupelo National Battlefield site where over 20,000 soldiers clashed during the American Civil War. The park provides a great place to learn and explore the scope and impact of the Battle of Tupelo, which is sometimes referred to as the Battle of Harrisburg. While at the park, you will be able to observe the Tupelo National Battlefield Monument, a granite monument built to honor the brave soldiers who fought at the battle of Tupelo. Tupelo’s modern metropolitan streets act as landmarks, leading you to locations where thousands of soldiers battled. The park also offers visitors an opportunity to view the historic Natchez Trace Parkway crisscrossing the city.

See also
15 Most Romantic Things to Do in San Francisco, California

The Vicksburg National Military Park is one of the top military sites to visit in Mississippi, also serving as a one-of-a-kind window into our country’s illustrious past. With Vicksburg’s rich Civil War history, there is no better way to learn about the town’s key role in the war than to tour and experience the park’s many attractions firsthand. The park has a total of 1,400 memorial monuments, markers and tablets that honor the soldiers who took part in the war. While at the park, visit the USS Cairo & Museum, where you will get a chance to view the restored ironclad warship, along with other weapons recovered during its excavation.

A tour around the park provided by a licensed battlefield guide is sure to lend color and perspective to your visit. A hike on the 12.5-mile-long Al Scheller Hiking Trail is also an excellent choice for a day of fresh air while providing a good glimpse of Mississippi’s scenic beauty.