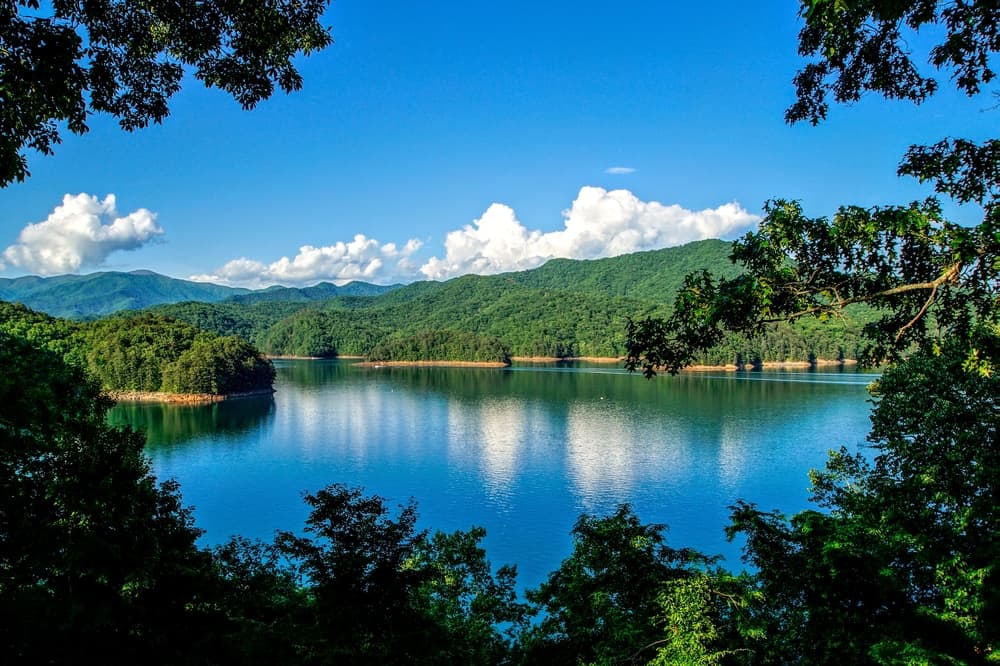 This North Carolina National park, popularly known as the Appalachian Trail, covers approximately 3,500 km. It spans across the Eastern United States, going through Mount Katahdin in Maine and Springer Mountain in Georgia.

Appalachian National Scenic Trail idea initially came about in 1921; however, the trail was fully established in 1937. It’s currently the longest hiking trail globally, with high visitor traffic estimated to be over two million each year. This National park’s pathway is majorly surrounded by forest and wildlands. However, a small section of the Appalachian Trail covers a few towns, farms, and roads that pass through 14 states.

Visitors who enjoy the outdoors can explore, hike, and have a nice picnic at the park. The highly elevated sections of Blue Ridge Parkway road are closed down from late fall through to early spring since they’re usually impassable during this time.

Cape Hatteras National Seashore, also known as the “Graveyard of the Atlantic,” has the tallest brick lighthouse in North Carolina and the United States of America. The lighthouse has a distinctive black and white striped pattern which makes it quite an attraction. This National Seashore covers more than 70 miles of the Outer Banks and North Carolina from the Bodie to Ocracoke Island.

Cape Hatteras is a great tourist destination as it combines cultural and natural resources with plenty of outdoor activities. The islands are a habitat for migrating waterfowls which typically offers a great bird viewing experience. Visitors can also engage in Kayaking, surfing, fishing, among other recreational activities.

Covering 56 miles across a section of the Crystal Coast, North of Carolina, Cape Lookout National Seashore is a great tourist destination. There are typically three undeveloped barrier islands that make up the Cape Lookout’s Seashore, precisely on the Shackleford and North and south Core Banks.

Reaching this National park entails riding a boat three miles offshore to get to the barriers of the Seashore, where a visitor center is situated, precisely on Harkers Island. Those visiting Cape Lookout National Seashore can indulge in various recreational activities ranging from fishing, shelling, birding, horse watching, lighthouse climbing, among others. Tourists are advised to carry their food and water supplies and avoid littering during their visit.

Sandburg spent over twenty years living on this particular farm, where he published a considerable amount of his work. This monument comprises the Sandburg residence, rolling pastures,5 miles of hiking trail, a goat farm, sheds, two small lakes, and several ponds, among other tourist attractions. There are also live performances commemorating Carl Sandburg that take place from mid-June up until mid-August.

This historic site preserves the cultural heritage of England’s first settlers, dating back between 1587 to 1590. Fort Raleigh National Historic Site is located off the US Highway 64 on Roanoke Colony northern end, 3 miles north of Manteo town. History buffs will definitely find this destination very intriguing.

There is a visitor center museum exhibiting the entire English expedition, the island’s Civil War history, the Roanoke Colony, and the Freedmen’s Colony, which took place between 1863 – 1867. A tour of Fort Raleigh National Historic site typically takes between one to two hours if you’re going to view all the historical exhibits.

See also
Stull Cemetery: How to Visit the Gates of Hell in Stull, Kansas

The Great Smoky Mountains National Park is located between North Carolina and Tennessee, having expansive scenery. There are miles of wooded trails, over 90 historic structures, educational exhibits, and lovely cascading waterfalls. The National park has close to 20,000 species of plants and fungi. Great Smoky Mountains National Park is, without a doubt, among the most biodiverse locations in the world.

The park also has an Appalachian trail that’s an excellent destination for hikers, an observation tower with an aerial view of the lovely landscape, and the mist-covered mountains. A visit to this particular destination is worthwhile as it will truly take your breath away.

Guilford Courthouse National Military Park honors those who fought in the Battle of Guilford Court House on March 15, 1781. This battle is of great significance as it contributed indirectly to the victory of the American revolutionary war, despite the Americans losing this particular battle against the British.

To access this National park, visitors can drive through the one-way tour road that goes through the battlefield or visit the Hoskins farm, an 18th-century historic farmstead. Alternatively, you can walk or bike on the 2.25-mile tour road, visit the parks museum, or the 28 monuments commemorating the soldiers of the Battle of Guilford Court House.

Established on June 2, 1926, Moores Creek National Battlefield was initially called National military park until September 8, 1980, when it was renamed to the former. This North Carolina national park commemorates the 1776 victory of close to eight hundred loyalists who fought at Moore’s Creek.

This win was significant for the American Forces in that it stopped the British invasion plans to attack Brunswick Town. Moores Creek National Battlefield also has a visitor center with historical exhibits. Outdoor enthusiasts can explore the park’s 88 acres with a wide range of dry pine forests, wet pine savanna, and a lovely creek.

This 330-mile trail goes through four states, namely, Tennessee, Virginia, North and South Carolina. Overmountain Victory National Historic Trail commemorates those who fought in the revolutionary war and passed through East Tennessee through the Unaka mountains. There is an 87 mile easily accessible pathway that is great for hiking.

Visitors can also explore the city museums and the historical militia campsites, which are situated near the Overmountain Victory National Historic Trail. Adventurous will be thrilled when they traverse across the scenic trails with accessible pathways, explicitly going through Abingdon, Virginia, along the Abingdon Muster Grounds through the Watauga River through Tennessee and North or South Carolina.

Between 1830 to1850, this historic trail was used in the infamous displacement of close to 60,000 Native Americans by the US government. Trail of Tears National Historic Trail honors the Muscogee, Indians, Cherokee, Chickasaw, Choctaw, and black slaves evicted forcefully from their ancestral homelands.

The trails the natives used as passage included the west of the Mississippi River to the southeastern part of the United States. Thousands of native Americans died from disease and starvation along this particular historic trail during the tragic transfer. When you’re visiting the Trail of Tears National Historic Trail you can use various accessible routes regardless of whether you’re driving or trekking.

Situated in Kill Devil Hills, this particular Memorial honors the first successful machine-powered flight. Wright Brothers National Memorial is where Orville and Wilbur Wright settled from 1900 to 1903 due to the steady winds in the location that was conducive for their airplane experiments.

After countless unsuccessful attempts to fly, they finally succeeded in 1903 where they completely revolutionized the world. The Wright Brothers National Memorial was established in 1932 while Orville was still alive. The Memorial has a 60-foot granite that’s hollow, having a black granite floor making it quite a spectacle.