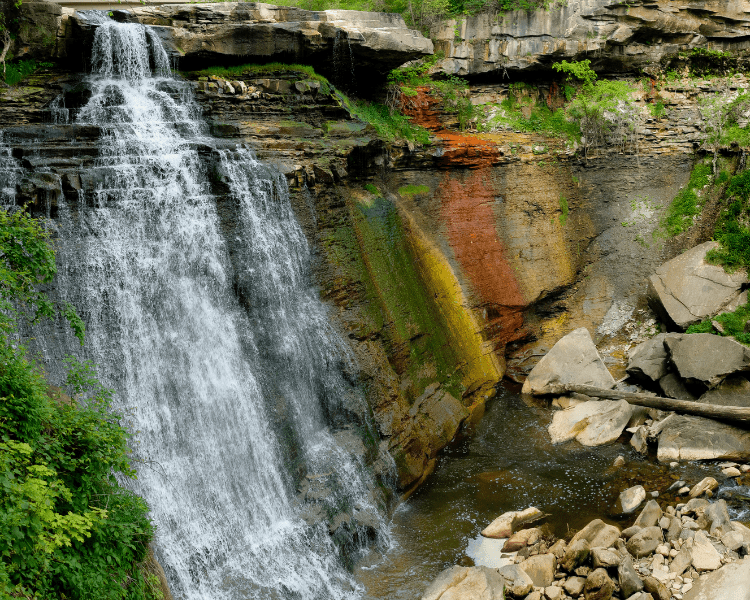 Located in Southwest Ohio, this national monument commemorates the life of Charles Young.  This respected military officer was born to enslaved parents in 1864 and went through many challenges, including racism. Despite this, Young became the third African American to graduate from the US Military Academy. Not just that, Young also rose to become the highest-ranking officer in the US Army.

The Monument is centered around the Colonel’s home to celebrate his life and the history of Buffalo soldiers. You can visit the site’s museum to learn about the battles that US-colored troops fought during the Civil War. Currently, visitors can only access the Charles Young Buffalo Soldiers NM through scheduled guided tours and visits.

Cuyahoga Valley National Park is a paradise of native plants and several wildlife species, including raccoons, coyotes, and red foxes. Located Northeast of Ohio, this 4000-acre park was designated a National Recreation Area in 1974 and became a National Park in 2000. CVNP was initially created to preserve the landscape surrounding the Cuyahoga River, but now, the park offers many outdoor activities.

Visitors have a lot to discover here; the forests, the stunning waterfalls, the four visitors centers, the historical sites in Ohio, and the rolling hills. You can also enjoy fishing, backpacking, golfing, and hiking/biking on the 125-mile scenic roads regardless of your skill level. While you are here, we recommend you stop by at the Cuyahoga Valley Scenic Railway for a themed train tour.

Dayton Aviation Heritage NHP offers insight into the lives of three significant historical figures: Wilbur Wright, Orville Wright, and Paul Laurence Dunbar. The Wright Brothers were known for their important contributions to inventions, especially the powered flight field. This historic park is the birthplace of aviation and consists of 6 sites documenting the invention of flight and aviation. Dayton Aviation Heritage NHP also commemorates the life of Paul Laurence Dunbar. He was a notable African American poet who excelled in a literary space dominated mainly by whites.

The park sees about 73,000 visitors yearly, and a good place to start your tour here is at the Visitor Center and Museum on Williams Street. After that, you can proceed to the Paul Lawrence Dunbar memorial site and Carillon Historical Park.

First Ladies NHS was established in 2000 and features former First Lady, Ida Saxton-McKinley’s home and the City National Bank Building. This site also has a Visitors Center where visitors can explore exhibits and watch the park film.

First Ladies NHS is open all year round and honors the contributions of US presidents’ wives to the nation. The highlight of the park is Ida Saxton’s home, who later became the wife of President William McKinley. Park staff offers tours to explore the home while highlighting the life of US 25th President, McKinley and his wife.

Hopewell is mainly known for the series of earthworks in different geometrical patterns. These earth mounds were built more than 2000 years ago by Native American Indians. In Ohio, this park is considered sacred and has been declared the most important archeological site in Ohio’s history.

Public ceremonies are often held at the park, and you can join one of such events or visit on your own to learn the importance of this site. Visitors can view the artifacts in the park and explore the interpretative trail that focuses on the culture of the natives. There are also museums and guided tours to learn about the people who used to live here.

This historic site is located on the family house of James A Garfield, the 20th President of the USA. Although James A Garfield spent 6 months as a president before his assassination, he was an iconic figure that led the nation during a critical period.

Lewis & Clark is a 4,900-mile trail that passes along the Ohio River and cuts through 16 states, including Illinois, Oregon, Indiana, and Washington. This famous historical trail follows the route that Lewis and Clark passed on their expedition.

Visitors can take a drive through the Ohio part of the trail and stop by some historical sites along the way. Close to the Ohio River, there’s the replica of the cabin that Clark lived in. The park staff maintains this cabin, and visitors are welcome as individuals or groups.  Also, the Lewis and Clark handshake festival is held here every year to celebrate the handshake that preceded a historical expedition.

North Country National Scenic Trail should be at the top of your must-visit list if you’re looking for outdoor fun in Ohio. This park runs through 7 states, including many parts of Ohio. It’s 4,600 miles long, making it the longest of the 11 National Scenic Trails in the US.

Here, visitors have the opportunity to hike the scenic valleys, take in the beautiful foliage and prairies as well as witness the ancient streams and lakes from over 10,000 years ago.

Perry’s Victory & International Peace Memorial is a giant 352 feet tall column that celebrates the long-standing peace that the US, UK, and Canada now share. This National monument was built to honor everyone that fought in the battle of Lake Erie in 1812.  It’s a 352 Column that has 3 American soldiers and 3 British soldiers buried underneath.

History lovers will love the Visitors Center, where they can learn about the Battle of Lake Erie and Commodore Perry, who the memorial was named after.

President William Howard Taft was raised right at this historic site. Designated a national historic site in 1969, this site makes a perfect place to learn about the history of this 27th US President. Here you can also explore the landscape grounds and historical sites like the barns and sheds built in 1899.