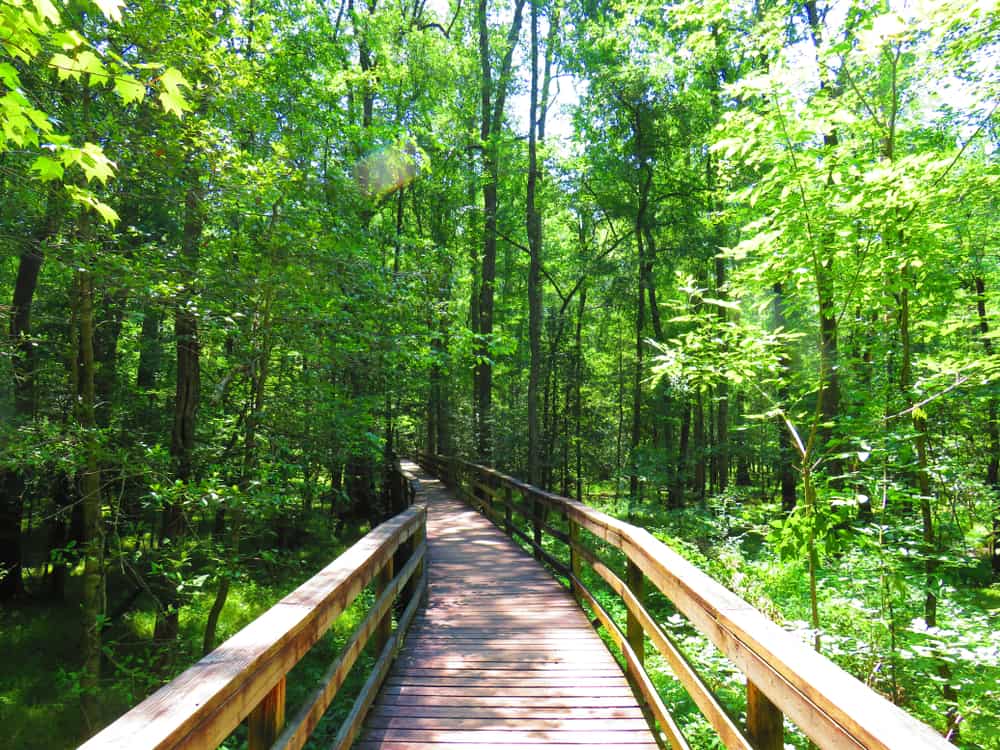 The Charles Pinckney National Historic Site in Mount Pleasant, South Carolina is a unit of the National Park Service of the United States which maintains a part of the Snee Farm plantation and country estate belonging to Charles Pinckney. A prominent South Carolina native, revolutionary war veteran, signatory to the United States constitution, and 4-term South Carolina governor whose father originally acquired the 715-acre farm in 1754, turning it into a rice and indigo plantation. The site, purchased by the national park service from preservationists, was designated a national historic site in 1988. The current 28.5-acre site which features grassy, wooded, and swampy areas, saw over 45000 visitors in 2011.

The 26000-acre Congaree National Park in South Carolina is home to some of the tallest trees in Eastern United States as well as one of the highest forest canopies in the world. The park was designated a United States National Park in 2003 following over 3 decades of local campaigns, with 15000 acres marked a wilderness area. The Congaree river which flows through the park was a cypress logging site from 1898 to 1914. A resumption of logging activity in the late 1960s led to 1976 legislation making the area a national preserve. Visitors to the park can enjoy a variety of activities including hiking, kayaking, camping, bird watching, and more. Lucky visitors in the summer might even be treated to colorful firefly displays.

This historic park comprises three sites, including Fort Sumter, famous in American history as the site where the civil war began. The other two sites are the Fort Sumter visitor education center and Fort Moultrie, all located in Charleston, South Carolina. Guests at the park can take a half-hour ferry ride from the visitor education center to Fort Sumter itself, where they can visit a museum that highlights the role of the fort in the civil war. The museum at the education center focuses on plantation culture, politics, and the formation of the Confederate army. Visitors to Fort Moultrie will be treated to museum exhibits and a movie while learning about the fort’s history.

This park, formerly called Reconstruction Era National Monument, is a recent addition to the list of United States National Historical Parks, having been established as such in March 2019. Located in Beaufort County, South Carolina, the park is dedicated to events of the reconstruction era that followed the end of the civil war. Many sites that saw crucial historical activities make up the park. These include Darrah Hall, an early school for emancipated slaves; Brick Baptist Church, a church building built by slaves in 1855; the Old Beaufort Firehouse, which hosts the park’s visitor center; and Emancipation Grove, where the emancipation proclamation was read to a crowd of 3000 slaves. All the sites are open to visitors.

On October 7, 1780, the American Patriots won a decisive victory over their Loyalist opponents in one of the most important battles of the revolutionary war. The Kings Mountain National Military Park honors this event. Guests at the site can explore the Visitor’s Center where they can watch a short film about the battle, view exhibits, and learn about the lives of those who participated in the battle. There’s also a bookstore featuring literature on the cultural and military history of the region, as well as information on the flora and fauna. All through the year, the park witnesses reconstruction of 18th-century military encampments and welcomes several thousand tourists.

The over 1000-acre Ninety Six National Historic Site, established in 1976, is located near Greenwood, South Carolina. The site preserves the original location of Ninety Six, a small town in 18th century South Carolina that witnessed the first land battle of the American Revolutionary War in November 1775. A small museum at the site holds artifacts and oil paintings of the battle. Visitors can also see a video about the battle, shop at the gift store, experience an audio tour of the site, and walk the one-mile trail ending at the initial site of Ninety Six. Ninety Six National Historic Site is sometimes referred to as Old Ninety Six and Star Fort.

Cowpens National Battlefield, established in March 1929, is a component of the United States National Park Service which preserves one of the major battlefields of the American Revolutionary War. The site, located near South Carolina’s state line with North Carolina, is grouped alongside three others meant to emphasize the role of the Southern colonies in winning American independence. The park features a museum where visitors can learn more about the Revolutionary War in general and the Battle of Cowpens in particular. Visitors can also take part in a guided tour of the battlefield itself and enjoy a picnic in the area. It should be noted that such activities as picnicking, commercial tours, weddings, etc. require a special permit.

The Overmountain Victory National Historic Trail, a part of the North Carolina State Trail System, marks the route traveled by Patriot militia who, in 1780, journeyed over the Appalachian mountains to participate in the Battle of Kings Mountain. This 330-mile trail covers parts of Virginia, Tennessee, South Carolina, and North Carolina. Visitors to the area today can hike this route via a pathway or travel on the commemorative motor route. Persons visiting in the fall may witness and also participate in a commemorative march in honor of the revolutionary soldiers. The trail also features a lake that visitors can fish in.