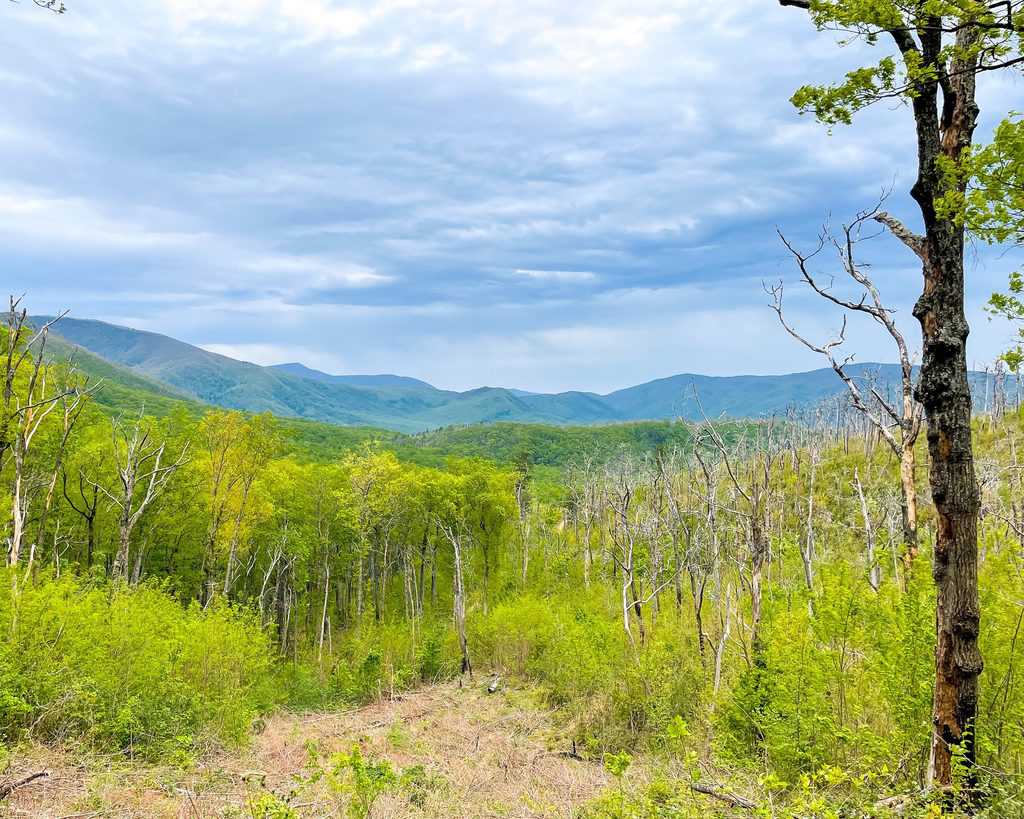 This particular Historic site was authorized by congress to become a U.S national Monument in 1935 and was later established in1942. Andrew Johnson National Historic site commemorates the 17th president of the United States of America, Andrew Johnson.

It showcases the late president’s humble beginning, upon his arrival in Tennessee in 1826, where he worked as a tailor. This Monument consists of Andrew Johnson’s residence, tailor shop, and the cemetery where he was buried. The graves of Johnson’s wife and those of his sons are also found on this National Historic Site. Across the street from the tailor shop, there are exhibits of history that led to the Civil War.

Appalachian National Scenic Trail or Appalachian Trail’s idea came about in 1921; however, the trail was completed in 1937, typically taking more than a decade. It spans across the Eastern United States, covering approximately 3500 km.

The trail passes through wildland through Springer Mountain in Georgia and Mount Katahdin in Maine, going through farms, towns, and roads in 14 states. According to the Appalachian Trail Conservancy, Appalachian is the longest hiking-only scenic trail in the world. It is estimated that over two million people go on a hike at least once per year.

Covering 90 miles of scenic valleys and gorges, the Big South Fork National River and Recreation Area consists of many natural bridges in Tennessee. It covers 125,00 acres of Cumberland Plateau, offering a wide range of recreational activities.

The Big South Fork starts at the Clear Fork junction and the New River in Scott County and cascades northeast, northwest, and north ending at Lake Cumberland in McCreary County, Kentucky. There’s an accessible trail within the park that leads to a one-of-a-kind wilderness lodge. Some of the amenities there include private ponds with docks, satellite TV, hot tubs, and fireplaces.

Chickamauga and Chattanooga National Military Park are located in Southeastern Tennessee and northern Georgia with close to 10,000 acres of preserved land. This particular park commemorates the two main battles during the American Civil War, namely, the Siege of Chattanooga and the Battle of Chickamauga in 1890. Visitors can go on a self-guided tour or with a park ranger.

There are plenty of recreational activities such as hiking, sightseeing, caravan tours, among others. History buffs can also visit the indoor exhibits at the park’s visitor center, where they get to learn more about the history of Chickamauga and Chattanooga National Military Park.

The Cumberland Gap National Historical Park is renowned for acting as a critical passageway through the lower central Appalachians during the colonial era. The park sits within the Appalachian Mountains, spreading through the Cumberland Mountains long ridge, near the Tennessee, Kentucky, and Virginia state junction.

This National Historical Park has plenty to offer for those visiting. For instance, there are beautiful underground caverns, rare geologic sandstone formations, vistas, diverse plants, and various animal species. To get there, drive eastwards on Highway 63 and Highway 25 E, then turn north on Highway 25E, where you’ll be a few miles from the park.

Fort Donelson National Battlefield honors those who fought in the civil war and won the first significant victory. However, the losses for Fort Donelson and Fort Henry were huge, especially for the confederates. As a result, Tennessee remained accessible to the Yankees, unlike Kentucky.

This particular National Battlefield has a visitor center in partnership with the Tennessee State Museum and Stewart County Visitor Center. It has an exhibit that showcases the story of the cavalry during the Civil War in Tennessee. Some of the items on display at the visitor center include the artifacts, photographs, and narrative behind the unique role of the mounted warfare.

See also
10 Essential Niagara Falls Tips: Everything You Need to Plan Your Trip!

The Great Smoky Mountains National Park has a dense forest with abundant wildflowers that grow all year round. There are accessible hiking routes that go through a section of the Appalachian Trail. Scenic views of rivers, streams, and waterfalls appear along the way, making the entire experience worthwhile. The park also offers various campsites such as horse camps, backpackers camps, group camps, etc.

This Historical Park showcases the events, the people, the science, and the engineering that facilitated the atomic bomb development, which gave Americans an edge resulting in the end of World War II.

The Manhattan Project National Historical Park, established on November 10, 2015, has three units in Oak Ridge, Tennessee, Hanford, Washington, and Los Alamos, New Mexico. A visit to this historical park is quite different from many other national parks. This is because some of the facilities there are inaccessible to the public, while others are accessible only through guided tours.

Today Visitors can access the Natchez Trace Parkway through driving, biking, hiking, and horseback riding. There are also camping grounds along the way, which makes it more exciting for outdoor enthusiasts. However, there are no showers, electricity, or dump stations, and the maximum allowable days on the camping grounds is usually 14 days.

Natchez has five other hiking trails that run roughly parallel to the 444-mile-long Trace Parkway scenic motor road. There is an 1812 war memorial, milepost 426.3, commemorating the volunteers who passed through the Natchez Trace during the 1821 war. There are also several unmarked graves on the Old Natchez Trace that commemorates these war heroes.

The Obed Wild and Scenic River cascades on 500-foot-deep gorges, with lovely scenery of the rugged terrain. This particular river has the same look as it did when the first settlers in the late 1700s strolled through its banks. Obed rises in Tennessee, south of Crossville, and is bridged by U.S. Highway 70 between the municipal airport and downtown Crossville.

Visitors can indulge in numerous recreational activities, such as paddling, fishing, rock climbing, hiking, and camping. There is an annual exhibit at the visitor center which showcases spectacular views of the diversity in the Obed Wild and Scenic River.

This historic trail commemorates the Revolutionary war of the men who crossed the Unaka Mountains and fought in the South Carolina Battles of Kings, in 1780. The Overmountain Victory National Historic Trail is part of the N.C State Trail System and the National Trails System. It stretches 330 miles passing through four states, namely Tennessee, Virginia, North and South Carolina.

Overmountain Victory National Historic Trail has a trail network comprising of a 330- mile corridor that includes a 70-mile branch from Elkin joining the main route at Morganton. The trail proceeds further in Rutherford and goes through a Rock Road in Gilbert Town Historic District. Hikers will most definitely enjoy the remarkable scenery on this accessible path.

This Tennessee National Park honors those who perished during the American Civil War. Close to 110,000 American troops clashed in a bloody battle that led to 23,746 casualties, the highest number when compared with all the previous wars combined. Shiloh National Military Park is situated in Mississippi, in Corinth,23 miles southwest of Shiloh.

There is also a National Cemetery that has the remains of 4000 soldiers alongside their families. There is a Museum at the National Military Park which showcases the large equipment used during the war. Visitors can go on a self-guided tour of the Shiloh Battlefield, which has a 12.7-mile route having 22 historical stops. They include the surviving Civil War fortifications, the homes of the War Generals, and a section of the battlefield.

Stones River National Battlefield was where one of the bloodiest conflicts during the civil war took place. However, both military and political gains of the union were accomplished, which changed the lives of those who fought.

History buffs get to understand the Stones River National Battlefield once they learn about the story, people, and places on this particular site. The park has a diverse, healthy ecosystem thanks to the latest technology and innovation used by the National Park Services. There are numerous plant types, different animal species, which are rare combinations, making a trip to this destination worth it.

Spanning 5,043 miles across nine states, the Trail of Tears National Historic Trail commemorates the Cherokee people forcefully removed from their homes in Tennessee, Alabama, and Georgia. They relocated to Oklahoma, back then an Indian Territory.

While en route, between 1838 to 1839, they faced many challenges such as disease and starvation that led to thousands of deaths. There are numerous activities and programs available at the Trail of Tears National Historic Trail, such as hiking and a tour of the 1812 battlefield. You can access this historic trail either on foot, bicycle, horse, water, or by vehicle to learn more about it.

Need more travel planning help? Here are all of my Tennessee travel resources!

How to Plan a Trip to Nashville + Travel Tips

What to buy in Nashville for souvenirs and gifts.

Looking for Instagram captions or Nashville inspiration? Here are the best quotes about Nashville.

Tips for planning a trip to Gatlinburg.

How to spend one day in Great Smoky Mountains National Park.

The 4 Best Neighborhoods in Memphis + Hotel Guide for Where to Stay in Memphis, TN

Included in these Round-Ups

The best scenic drives in America

The most charming historic towns in the USA

The prettiest waterfalls in the US