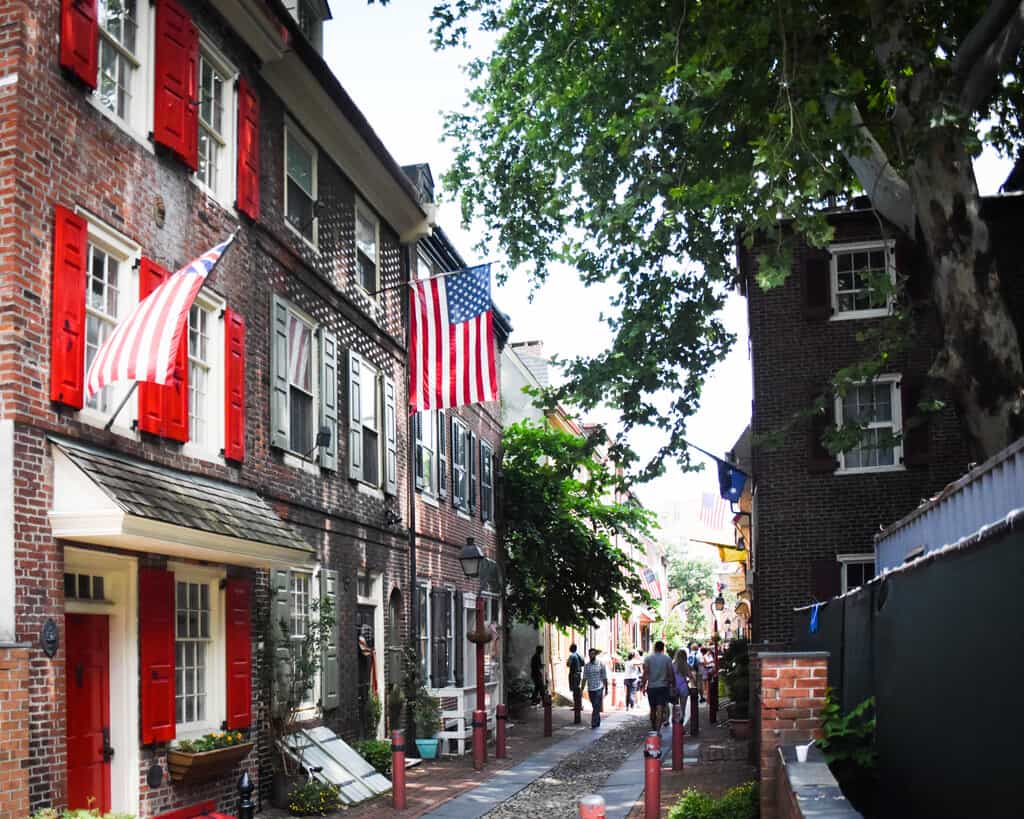 Philadelphia is by far one of my favorite American cities. I used to live there and run a photo-a-day website there, and it’s one of the best cities to live in if you’re a history buff. On today’s episode, we talk about the amazing Elfreth’s Alley, the oldest continually lived-on residential street in the country (hard to fit that on a title belt, but still pretty cool). I had the chance to take a tour of the street with the Elfreth’s Alley Association’s Board Member Brittany Thomas. If you have an interest in early American history, this is the perfect episode for you.

The early days of Elfreth’s Alley

While there is a street in Florida that lays claim to the title of the oldest street in America, Elfreth’s Alley is the oldest street where people have actually lived. The first homes sprung up in 1702 and were built all the way up into the 1800s. And while the street now may appear affluent, the first residents would have lived and worked on the street, being unable to afford a home and a business elsewhere. The Port of Philadelphia was originally at the end of the street, but now there’s a wall there that butts up against I-95. The homes were built along the dirt road of Elfreth’s Alley, and while buyers have, over the years, added on and built up the original houses, their footprints remain small. It really looks, as close as a city street can, to colonial times.

The story of William Penn

If you’ve never spent much time in Philadelphia, or know much about its history, you may not know that just about everything in Philadelphia goes back to a man named William Penn. The story Brittany tells me is fascinating, about how the King of England owed William Penn money, so he gave him land in the colonies, and then shipped a thorn in his side—the Quakers—over there, as well. Penn was actually good to the Native Americans who were on the land the King gave him, and he eventually decided to name the state Pennsylvania, with “Sylvania,” signaling that the state was heavily forested. Brittany also tells me about a standoff between the Baltimore family and the Penn family, but you’ll have to listen to hear it.

Elfreth’s Alley in the American Revolution

One of the fascinating aspects of Elfreth’s Alley history is the women’s history that runs throughout it. In the house, next door to the building Brittany and I met in housed two seamstresses who made mantuas, sort of loose gowns that you may know from your American Girl days. (In fact, Elfreth’s Alley was saved by a woman.) Another intriguing part of life on Elfreth’s Alley is that it wasn’t exactly a hotbed of revolutionary fervor. There was conflict around independence all around the colonies, and that conflict was alive and well, right down the street from Independence Hall. Brittany told me a great story about brothers divided over the revolution that you have to hear.