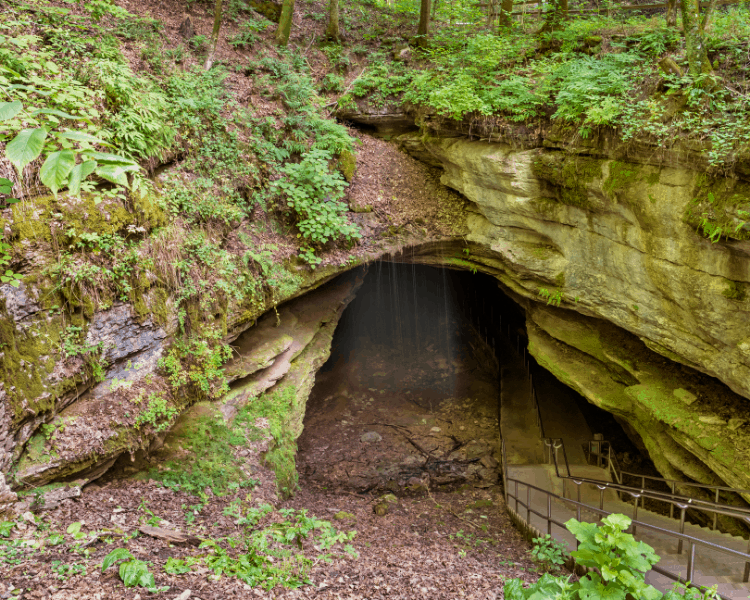 Deep below the forested hills of the Green River valley in South Central Kentucky in the United States, you will find Mammoth Cave.

By most reckonings, it’s the world’s largest cave system: an inconceivably complex maze of passages and chambers, stretching for over 650 kilometers that we know of, with potentially as many as 1000 kilometers more left to discover.

Inside, a wonderland awaits: passages that go on forever, and in spots, stalactites, stalagmites, gypsum crystals, and rock features that resemble frozen waterfalls. Other caverns might be more beautiful, but none are as massive or as awesome. Mammoth earns its name.

South Central Kentucky’s geology encourages caves.  The bedrock is limestone, a relatively porous sedimentary rock made from the calcium-rich shells of ancient sea creatures.  Water seeping through the rock dissolves limestone over the course of eons, creating caves.  What makes Mammoth special is the layer of much tougher sandstone that covers the limestone like an umbrella.  Without that layer, water would eventually cause opening and sinkholes, causing the cave to collapse.  Mammoth’s sandstone umbrella has kept it mammoth.

The US government has protected Mammoth Cave as a National Park since 1941, a welcome designation considering the uber-cheesy and touristy condition of nearby privately owned caves outside the park.  Even today, these other attractions vie for your attention as you drive along Interstate highway 65 through the hills between Nashville and Louisville, the two cities to which you mostly likely have flown to start your journey.

But your goal is Mammoth Cave itself.  For me, growing up in Middle Tennessee, Mammoth was our local national park.  And while the above ground park is quite lovely, with some nice hiking trails and picnic areas, the real excitement is underground, and the adventure begins at the Visitor Center.

There, you will see the list of cave tours offered that day.  Due to higher visitor demand and longer daylight hours, summer usually brings a significantly greater selection of tours than winter, as many as a dozen.  While a short self-guided tour is available, all other tours are ranger-led and require reservations.  The shortest tour, Mammoth Passage, runs 1 1/4 hours and costs $8 for adults (less for children 6 to 12).  The longest, Grand Avenue, runs 6 hours and costs $30.  Each of the tours visits a different part of the cave or covers a specific topic, like the cave’s history or geology.  Two of the tours are even done by lantern light instead of along the usual electrically lit routes.

The post popular tour, and one I’ve enjoyed, is the Historic Tour, which descends via the Historic natural entrance found just behind the visitor center.  The Historic Tour takes in many of the most famous Mammoth chambers: the Rotunda, the Ruins of Karnak, the Giant’s Coffin, the Bottomless Pit and notably Fat Man’s Misery.  You can see where Jenny Lind, the world-renowned Swedish singer, visited in 1851.

You will learn about the original guides and explorers, often enslaved African Americans who risked their lives delving deeper and deeper into the unknown.  Their stories are tragic: working to buy their freedom while their children were sold away.  Kentucky’s history of enslavement and segregation is, as in much of the south, a sin not yet fully dealt with, but recent recognition of African Americans’ significant contributions to Mammoth help to shine a light.

My favorite experience has been the Grand Avenue tour, a 4 hour, 6 mile schlep only offered once a day on summer mornings.  For it, and some of the other tours, a bus takes your group to one of the cave’s five alternate entrances.  Entering the Carmichael entrance, you explore the gypsum-crusted walls of mile-long Cleaveland Avenue, then see the Snowball room, visited since the 1840s.  Passages then wind in and out of fancifully named chambers like Thorpe’s Pit, the Rock of Gibraltar, and Alice’s Grotto.  You climb upwards to Mt McKinley, then descend into the Grand Canyon. Eventually, past soaring domes and seemingly bottomless pits, you make your way to the glorious Frozen Niagara, a vast “waterfall” of stone deposited by thousands of years of dripping mineral-laden.  It’s a great way to see the complete magnificence of Mammoth.

For Grand Avenue, and for most of the specialized tours, advance reservations are essential.

If you have mobility challenges, don’t worry.  Mammoth offers an accessible tour that uses an elevator to access the cave, so visitors in wheelchairs can experience the cave as well.  Strollers and baby carriers are not allowed on other tours either, and the cave really is best suited for kids over 6.

All told, a trip to Mammoth Cave can be quite affordable.  For a family of four in the winter of 2019, taking the 2-hour Historic Tour would cost $58.  Dining options at the park are limited: there is a small snack bar with burgers and salads for around $8 per person and an overpriced full-service restaurant.  Outside the park, there are better and more reasonable choices, particularly in Glasgow, but Glasgow is a 30-minute drive from the visitor center.

Staying at Mammoth Cave can be affordable as well, depending on how much roughing it you want to do.  Campground permits at the park run around $20 per night, more for RVs or equestrian-friendly sites.  A motel-style lodge by the visitor center starts at $70 for cabins without air conditioning, heating, TV or wifi and runs up to close to $300 for more standard rooms in high season.  Outside the park, a variety of two- and three-star hotels offer more reasonably priced alternatives, again with the sacrifice of needing to drive 15 to 30 minutes to get to the caves.

Each time I’ve been to Mammoth, I’ve done it as a daytrip or as a stop on the way up or down I-65.  And each time, I’ve wished I had spent more time.  There are so many unique tours, like the Wild Tour in which you do some real spelunking, or the River Styx tour that travels along an underground river.  (In the old days, rangers gave boat rides along the underground Echo River, but they stopped some years back for fear of environmental damage.)

The aboveground portion of the park offers hiking, canoeing, kayaking, swimming, fishing, and enjoying the hills and dells of the Green River and its valley.  And then there’s all the other things this portion of Kentucky has to offer.

South of the cave is the antebellum college town of Bowling Green, also known as the home of General Motors’ famous sports car: the Corvette.  BG offers a hipster downtown and the National Corvette Museum, a must for the car fan in your life.  It’s also an impressive example of the region’s geology.  In 2014, a 13-meter wide and 8-meter deep sinkhole opened up in the middle of the museum. Eight rare Corvettes, collectively valued at more than $1 million, fell into the sinkhole.  Thankfully, no one was in the museum at the time.  Now visitors can experience the Corvette Cave-In exhibit, see the security camera footage of the sinkhole, and know that the rest of the museum is safely secured.

In the immediate cave area are some of Kentucky’s cheesiest tourism attractions, like Dinosaur World, where life-size replicas of dinosaurs loom along forested trails, or the old-school slightly hillbilly Wild West amusement park Guntown Mountain.  My neighbor gives high marks to Kentucky Down Under, a zoo featuring Australian animals – I can’t vouch for that personally though.

North of the cave area, you can find Abraham Lincoln’s birthplace, a National Historic Site in Hodgenville.  Kentucky, as the most border of border states during the Civil War, was the birthplace of both Lincoln and Jefferson Davis, president of the Confederacy.  That division holds today.  While Kentucky is certainly culturally Southern, Midwestern textures appear unexpectedly in the cities.

See also
50 Quotes about Texas that Can't Be Messed With

Before you get to the cities, you’ll want to spend time around Bardstown, at the center of Kentucky’s legendary bourbon country.  While Scots might disagree incorrectly, Kentucky’s whisky is the world’s best, and the past decade has seen an explosion in craft distilleries.  Basing yourself in charming Bardstown, you can visit distillery after distillery, sampling product and declaring that Kentucky is the greatest place in the world.  That might be the brown liquor talking.

Wrap up your Kentucky journey in Louisville (pronounced “LOO-i-vul”), where you can watch the horses in the Kentucky Derby, assuming you can get tickets and have the appropriate outfits.  If you can’t make the derby, you can still visit the racetrack at Churchill Downs.  Louisville rewards a deep exploration with a high-quality restaurant scene and shockingly creative cocktail bars. You’d never expect that many different ways to drink bourbon.  Of course, the most famous is the mint julep, a sweet, icy, minty concoction that makes a hot summer night far more pleasant.  While in Louisville,  be sure to have a hot brown, an open-faced turkey sandwich doused in mornay sauce.  It’s just the right thing to do.

I’m a native Tennessean, and saying nice things about Kentucky is not something we tend to do, but even I have to admit that the Bluegrass Commonwealth is worth your time, both above and below ground.

Carolyn Vahrenkamp hosts Wonders of the World, a podcast that uses the great places on earth to discuss history, travel and food from across the globe.  Find it on your podcast app of choice, visit wonderspodcast.com or follow Carolyn on Twitter @wonderspodcast.