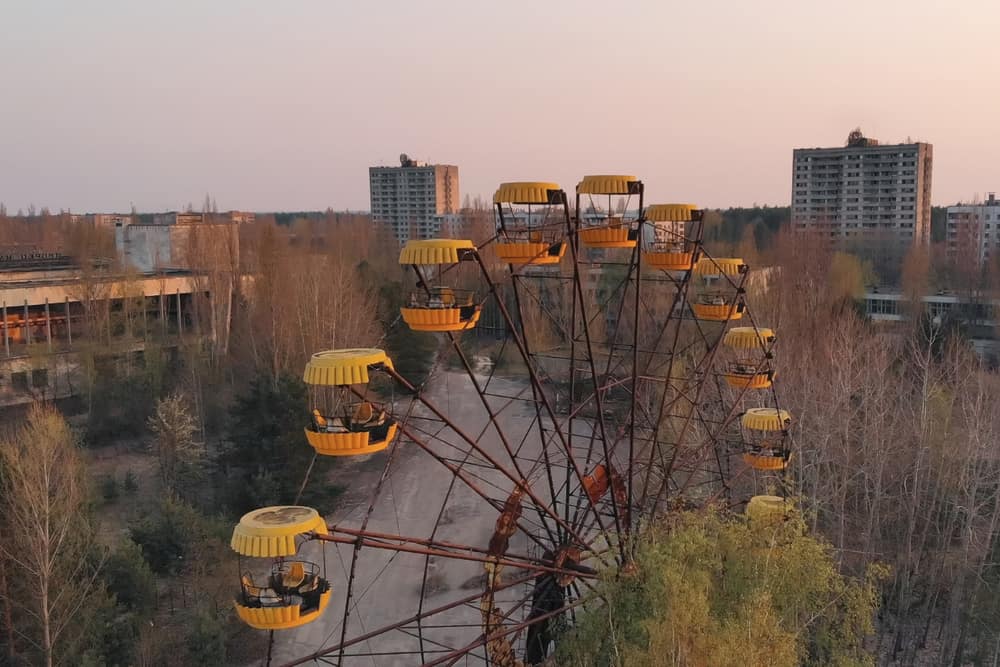 Chernobyl has left its mark on history. It’s a cautionary tale, an environment case study, a disaster that shattered lives and families, a peek into the now-lost Soviet way of life, and the inspiration for change.

Because of this, it has inspired many writers, poets, documentarians, historians, politicians, and television writers to pen beautiful and haunting words about what happened here.

I’ve also added some quotes about the Chernobyl disaster from survivors. These are the Chernobyl quotes I found the most poignant and thought-provoking.

Note: If you’re going to visit the site and you want to use these as Chernobyl Instagram Captions, make sure to put context on what you’re seeing. It’s okay to take IG photos from there if you’re educating people about what you’re learning, and you’re not just doing it for the ‘gram.

Read Next: Chernobyl Tours: 10 Things to Know Before You Tour Pripyat and Chernobyl

The Best Quotes about Chernobyl

Here are my favorite Chernobyl quotes from history, literature, film, and television.

Is there anything more frightening than people? –Svetlana Alexievich

The world has already been overwhelmed by one Chernobyl and one exclusion zone. It cannot afford it anymore. It must learn its lessons from what happened in and around Chernobyl on April 26, 1986. –Serhii Plokhy

Everyone’s depressed. It’s a feeling of doom. Chernobyl is a metaphor, a symbol. And it’s changed our everyday life, and our thinking. –Svetlana Alexievich

To be a scientist is to be naive. We are so focused on our search for truth we fail to consider how few actually want us to find it. But it is always there whether we see it or not, whether we choose to or not. The truth doesn’t care about our needs or wants – it doesn’t care about our governments, our ideologies, our religions – to lie in wait for all time. This, at last, is the gift of Chernobyl. Where I once would fear the cost of truth, now I only ask what is the cost of lies. -HBO Chernobyl

My friends were dying under my eyes. -Konstantyn Sokolov

The accident at the Chernobyl nuclear plant…has painfully affected the Soviet people, and shocked the international community. For the first time, we confront the real force of nuclear energy, out of control. -Mikhail Gorbachev

In fact, all of us have a piece of Chernobyl in our bodies going back to 1986. -Michio Kaku

The whole country grieves and the whole world joins us in this grief. -Lena Makarova

Dyatlov broke every rule we have. He pushed a reactor to the brink of destruction. He did these things believing there was a failsafe; AZ-5, a simple button to shut it all down. But in the circumstances he created, there wasn’t. The shutdown system had a fatal flaw. At 1:23:40, Akimov engages AZ-5. The fully-withdrawn control rods begin moving back into the reactor. These rods are made of boron, which reduces reactivity, but not their tips. The tips are made of graphite, which accelerates reactivity. -HBO Chernobyl

Ukraine announced plans to open Chernobyl, their nuclear disaster site, to tourists. They say it’s just like Disneyland, except the 6-foot mouse is real. -Conan O’Brien

We are already dead. Go away. -Mykola Malyshev

I think the wildest wildlife you can find these days is in Chernobyl. -Aleksandra Mir

Even if it’s poisoned with radiation, it’s still my home. There’s no place else they need us. Even a bird loves its nest. –Svetlana Alexievich

This is what they mean by ‘ghost town’, she thought. It truly feels like a place frozen in time. –Jeremy Robinson

Cesium, iodine from the Chernobyl reactor accident went around the world many times and everyone on the Earth has a piece of Chernobyl in their bodies, but it’s very tiny – too small to cause much damage. -Michio Kaku

Ten years after the Chernobyl accident, and am I the only one that’s disappointed? Still no superheroes. -Jimmy Carr

Chernobyl has strengthened the growing impulse to escape from the nightmare of peace being dependent upon the contemplation of horrific and mutual carnage. Events have now so developed that this aspiration can, at last, be rationally, logically and – I dare to add – patriotically seized by the people of the United Kingdom if they will use their votes to do so. -Enoch Powell

These are the most important 90 seconds of your lives. Commit your task to memory, then do your job. -HBO Chernobyl

If my goals and victories can help the world remember Chernobyl and bring a smile to the face of the people still suffering then I dedicate all my success to them. -Andriy Shevchenko

Every day, I would watch television and expect to hear when we could come back. When they said we could never come back, I burst into tears … We feel like outcasts. No one needs us. -Valentyna Abramovych.

Whether you’re planning to visit Chernobyl or simply interested in learning as much as you can from home, I have some resources to help you.

First, check out the best books about Chernobyl, including novels, nonfiction, and memoirs. You can also listen to this interview I did on exactly what happened at Chernobyl see what Chernobyl looks like today.

If you are heading to Kiev and want to visit, read the ten things you need to know before you tour Chernobyl, which includes what to wear and bring with you.

5 Things to Bring with You to Ukraine

I have entire Ukraine packing list for you to use, but make sure to bring these five things with you.

The Lonely Planet Ukraine w guidebook. It can be kind of a pain to find the major guidebooks once you land, or you’ll find them overpriced. I always like to pick mine up ahead of time.

An Unlocked Cell Phone so that you can use a Ukrainian sim card while here to help navigate public transportation and when you’re on the road.

A Camera since Ukraine is super photogenic. I use a mix of my Nikon D810 and my  Samsung8 smartphone these days.

A Great Day Bag so you can carry what you need with you (like your camera, snacks, water, sunscreen, cash, etc). My current favorite is the Pacsafe Citysafe, which is especially great for Kiev because it has many anti-theft features designed to deter pickpockets. It also transitions to a night bag more easily and won’t embarrass you if you go to dinner directly after sightseeing all day.

Read More: Ukraine Packing List: What to Pack for Ukraine for Women and Men

Before you leave for Ukraine make sure you have a valid Travel Insurance Policy because accidents happen on the road. I pay for World Nomads, and I happily recommend them. It’s especially important to get travel insurance if you’ll be hanging out in places like Chernobyl where the infrastructure of the buildings cannot be maintained.

See also
Best Things to Do in Kiev, Ukraine

Pin the Best Quotes about Chernobyl to Read Later