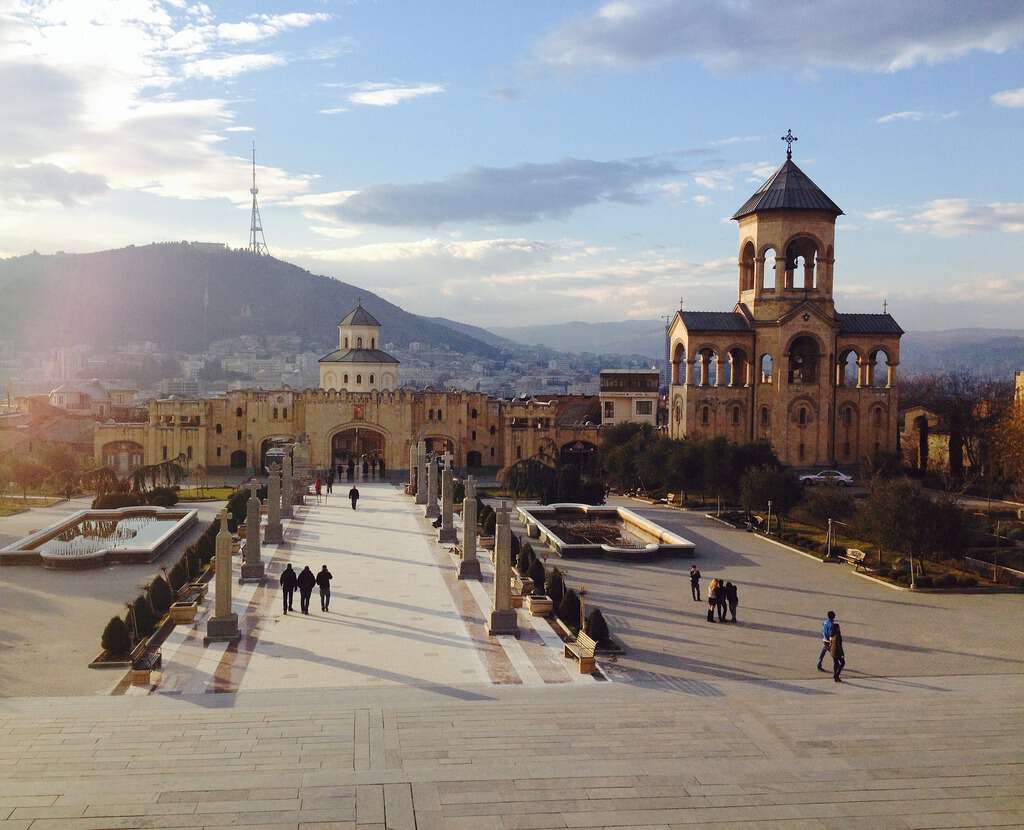 Looking to get from Sheki, Azerbaijan to Tbilisi, Georgia? The options are limited, and all are a little bit unpleasant. However, my adventure ended up being absolutely terrifying! Here’s what you need to know to make the from Sheki to Tbilisi without running into the same problems that I had!

Note that I am a huge proponent of traveling in Azerbaijan and the Caucasus; however, I had two bad travel experiences using public transportation, and I want you to be prepared so you can avoid the problems I had.

The options for getting from Sheki to Tbilisi seemed great at first, but by the time we had to actually make a decision for how to make the trip, each of these great options started to look terrible and we had to pick based on which was the least-bad.

We had enjoyed our time in relaxing Sheki, but it leaving it was becoming complicated. Here are the three ways to get from Sheki to Tbilisi:

See also
Azerbaijan Packing List: What to Pack for Azerbaijan for Women and Men

Sheki to Tbilisi by Marshrutka

This was the most common option we found, and maybe we should have done it in retrospect. However, our marshrutka from Ganja to Sheki had been so unpleasant that we wanted to avoid a repeat of the sweaty-hot-box trauma that we’d had on the way there. If you decide to take a marshrutka, these instructions from Tripadvisor are the same as what we were told by the owner of our guesthouse.

I recently travelled from Sheki to Tbilisi. I took a minibus (marshrutka) from Sheki to Qax at 8 am in the morning (45 min ride, 1 AZN). After a 1.5 hour wait, I took another bus from Qax to Tbilisi at 10:30 am (8 AZN). If you take this minibus, you get off at the border, go through immigrations and customs of the two countries on foot, and get on the same minibus after that. You need to wait for all the passengers to finish the procedure so it took about 1 hour and 15 minutes. From the border to Tbilisi, it was about 3 hours. I arrived at the bus center of Tbilisi around 16:30.

It was a uncomfortable long ride, as the minibus was so packed that I couldn’t move my feet…

If you do decide to take a marshrutka, I would guess they are always full. Since they don’t typically leave until they fill up and they leave as soon as they do fill up, people tend to get there early. If you do choose this route, my tips for taking marshrutkas in Azerbaijan and info on the Sheki bus station are in this post:

How to Get from Ganja to Sheki and Vice Versa: Well that was Unpleasant

Sheki to Tbilisi by Train

We found information on how to take the train that runs from Baku to Tbilisi by getting on at Balakan. However, our guesthouse advised us against this since actually getting on the train and purchasing a ticket would be complicated. He suggested that while this route was theoretically possible, that in actuality there wouldn’t be any way to execute on it.

See also
What to Pack for Georgia: The Ultimate Georgia Packing List for Women and Men

If you do end up choosing this route and it works out, please let me know and I’ll update this information or link to a place where you post it online.

Sheki to Tbilisi by Taxi

This option was actually super easy to arrange, although it obviously cost more than a marshrutka. Our guesthouse owner booked us a taxi for 50 manats (about 25 euro) to take us to the Azerbaijan-Georgia border.

The plan was to cross the border on foot, and then get into a shared taxi on the other side that should cost 15 lari each to get to Tbilisi. Thus, altogether the costs were estimated to be about 37 euros for two people to take a taxi from Sheki to Tbilisi, which we felt was a great deal to avoid being stuffed into a marshrutka.

Sheki to the Georgian Border

The first segment of the day went perfectly. Our taxi driver picked us up at 9 am. We added a thirty-minute stop at the Church in Kish for 10 manats, and our driver also pointed out a few other historic sites in Kurmuk and took us to one of the cooler World War II memorials in Balakan. By the time we got dropped at the border, we were happy campers.

I’ll go through the process of crossing the border in a different section. Here I’ll just note that walking across the border was easy and that it’s the same process whether you take a marshrutka or taxi.

Getting a Taxi at the Georgian Border from Azerbaijan

It was the taxi from the Georgian side of the border to Tbilisi that was terrifying. There were no shared taxis, and the taxi drivers who were there kept trying to charge us $50 US for the drive, which was four times what we were told the price should be.

We walked away from all the taxis trying to overcharge us and sat down at the table in front of the store to think. It was at this point where things went from frustrating to bizarre. A woman came out from the store and took the chair out from under my friend and then proceeded to stare at us for twenty minutes while we waited for the taxi drivers to come back with a better offer.

Finally, one of the drivers came back to us and offered us 60 lari (about 21 euros). While this price was double what we were told a shared taxi would be, there weren’t any shared taxis to be found. We decided to just opt for the private taxi and make it work. We didn’t want to chill at the border anymore, and there seemed to be no other options. The taxi driver then called another driver to come to get us and told us to wait fifteen minutes.

When our taxi showed up, which seemed to just be the car of a random guy, we ran into another snag. The guy we had negotiated with decided to try to get us to pay more money. It was difficult to tell through the broken English/Russian we were speaking whether this would be additional money on top of the 60 lari or if this was paying for the ride up front.

They kept mentioning petrol. They called a third person who spoke English to translate for us, but I still couldn’t tell if this was more money or money up front. I just kept saying no until they dropped it. I didn’t feel comfortable paying up front for the job, and the car seemed to have a full tank. Either way, they let it go and we took off.

The Taxi Ride from the Azerbaijan-Georgia Border to Tbilisi: WTF

The morning was lovely, and negotiating in broken Russian in a border town is just a part of traveling through this part of the world. It’s the actual taxi ride where things got terrifying. Our driver consistently drove thirty to forty KM above the speed limit, split lanes whenever possible, tailed people in front of us for only going twenty above, and literally laughed at us when we asked him to slow down.

See also
Tbilisi or Baku: Which Caucasian Capital is Right for Your Trip?

He even got pulled over, but bribed the cop and kept on speeding. When we passed an overturned car on the highway, my friend said she thought we were going to die.

Arriving in Tbilisi in the rain, our driver tried to leave us stranded on the edge of town. He refused to take us to our actual accommodations, instead, he ordered us out of the cab. Luckily my friend told him we wouldn’t get out unti he got us another taxi to take us to the apartment. He flagged one down, and we got into the next cab.

Of course, the driver had communicated where we needed to go incorrectly, so there were a few more twists and turns in the process. However, we made it to our new Tblisi apartment in one very traumatized piece.

Sheki to Tblisi by Taxi Costs

Here’s a breakdown of our actual costs:

Taxi from Sheki to the Azerbaijan Border with sightseeing stops: 60 manats (about 30 euros)

Taxi from Georgian Border to Tbilisi: 60 lari (about 21 euros)

Taxi from a Random place in Tbilisi to where we actually needed to go: 5 lari (about 2 euros)

Total Costs from Sheki to Tbilisi: about 58 euros for two people (about 11 more than quoted after we added in a few extras on our own)

Which Option Should You Choose?

We were happy with the final cost, even with the little bit extra, since we are splitting it between two people. It’s much more than taking the marshrutkas; however, and I can’t honestly say which option I would do if I had to do it again. They’re both pretty terrible choices.

If I needed to get from Azerbaijan to Georgia again, I’d probably put Ganja after Sheki on the itinerary and take the bus from there. They have large buses and not just marshrutkas, and my experiences with large buses in Azerbaijan were fabulous (as far as bus travel goes, anyway).

Also, every taxi driver I had in Azerbaijan was great, so I don’t know if we just got a bad driver in Georgia or if he was typical I know that drivers here are generally much worse than Azerbaijan, but I have had some great Georgian drivers so far. Also, it’s possible you would get the exact same driver we had since there seemed to be the same guys who work there every day.

I don’t know if I can honestly recommend one method over the other. Just know what the positives and negatives of marshrutkas and taxis are, and make the choice that fits your budget and timeline.

Read: What to Pack for Azerbaijan

How to Cross the Border from Azerbaijan to Georgia on Foot

No matter which method you choose, you’ll need to cross the border on foot. The process is the same regardless of how you got to the border. Here’s what you need to know:

How to Get from Tbilisi to Sheki

To do this journey in reverse, have your accommodations in Georgia arrange for your taxi to the border. Try to get a shared taxi if you can, otherwise, you can get a marshrutka. I’ve found marshrutkas in Georgia to be better than the ones in Azerbaijan (though they still drive like maniacs).

The border crossing will be the same as below, except that you need to make sure you have your Azerbaijan eVisa printout with you. This is crucial or you won’t be allowed in the country, whereas when leaving it’s good to have but they don’t ask every time. Once in Azerbaijan, I would ask your guesthouse to have a taxi waiting to pick you up at the border. You can use the prices above as guidelines, though let me know if you get better rates and I’ll update this post.

More Information about Travel in Azerbaijan

More Information about Travel in Georgia

Many people who travel Azerbaijan and Georgia combine them with a trip to Armenia:

Have You traveled from Sheki to Tbilisi or from Tbilisi to Sheki? Are you planning on making the trip? Share any tips and questions below!

Pin this article for Your Trips to Azerbaijan and Georgia

3 thoughts on “How to Get from Sheki to Tbilisi and Vice Versa: Well that was Terrifying”