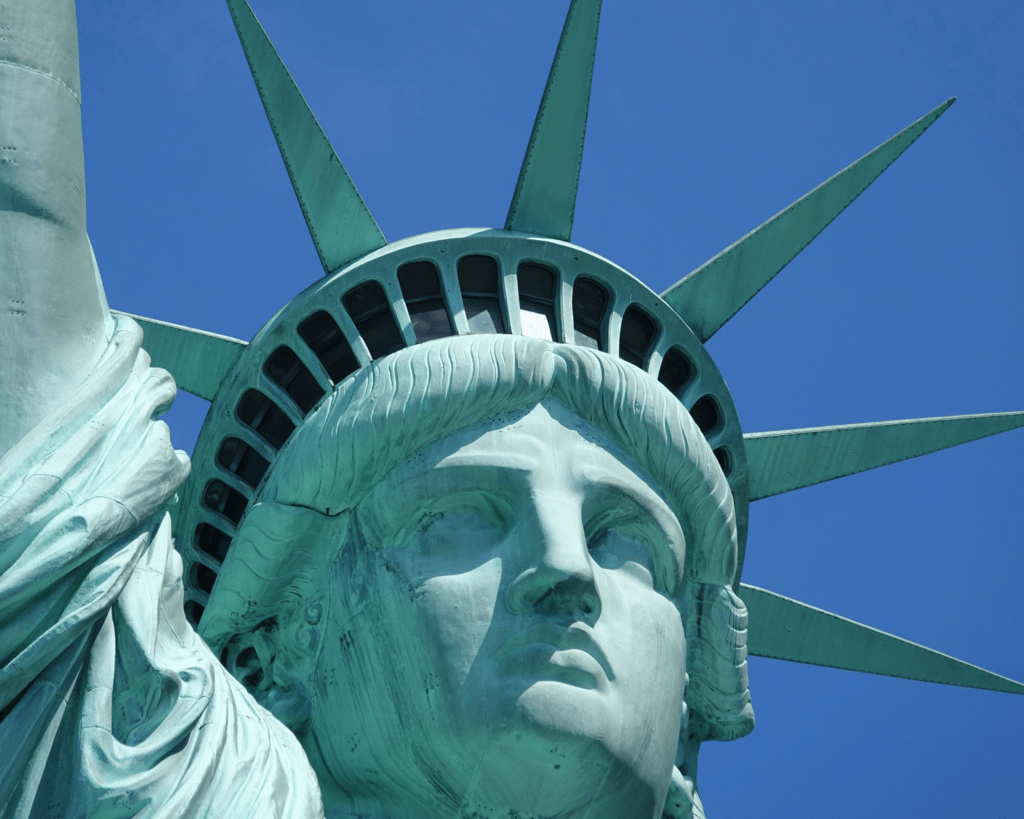 Looking for beautiful quotes about the Statue of Liberty? The Lady in the Harbor has inspired some truly beautiful travel quotes.

How to Use these Statue of Liberty Quotes

If you do use one, I’d love if you linked or tagged me so I can enjoy your work!

First, What Is the Quote on the Statue of Liberty?

The poem is by Emma Lazarus, and it was written in 1883 to help raise money for the statue’s erection in New York Harbor.

While many people just refer to it as the Statue of Liberty poem, it’s a beautiful sonnet entitled “The New Colossus” after the Colossus of Rhodes.

This excerpt is the most famous Statue of Liberty quote:

Give me your tired, your poor,
Your huddled masses yearning to breathe free

However, you can use any part of the full text of the poem:

With conquering limbs astride from land to land;

Here at our sea-washed, sunset gates shall stand

A mighty woman with a torch, whose flame

Is the imprisoned lightning, and her name

Mother of Exiles. From her beacon-hand

With silent lips. “Give me your tired, your poor,

The wretched refuse of your teeming shore.

Send these, the homeless, tempest-tost to me,

I lift my lamp beside the golden door!”

Or you can just use the portion in the poem that is what the Statue of Liberty says:

“Give me your tired, your poor,

The wretched refuse of your teeming shore.

Send these, the homeless, tempest-tost to me,

I lift my lamp beside the golden door!”

The Statue of Liberty Inscription

If you want to use a Lady Liberty quote but don’t want to use the poem, you might wonder what is written on the Statue of Liberty’s tablet. It’s a date in Roman numerals:

This translates to July 4th, 1776, which is the day the US adopted the Declaration of Independence.

While the poem on the base was written by an American, this tablet inscription was part of the statue when it came over the Atlantic as a gift from France.

If you don’t want to use the statue’s inscription or poem, there are many other great quotes to choose from! Here are my favorite quotes about the Statue of Liberty, including inspiration from poems, literature, pop culture, and quotes by famous authors!

It’s not enough for the torch of liberty to be held up high only by one woman, every human must hold the torch up high in every corner of the world. –Abhijit Naskar

America is known as a country that welcomes people to its shores. All kinds of people. The image of the Statue of Liberty with Emma Lazarus’ famous poem.

She lifts her lamp and welcomes people to the golden shore, where they will not experience prejudice because of the color of their skin, the religious faith that they follow. -Ruth Bader Ginsburg

Its magnificence was indescribable, and its magnitude was inconceivable. She felt overwhelmed in the presence of its greatness. –Mona Rodriguez

You sail into the harbor, and Staten Island is on your left, and then you see the Statue of Liberty. This is what everyone in the world has dreams of when they think about New York.

And I thought, ‘My God, I’m in Heaven. I’ll be dancing down Fifth Avenue like Fred Astaire with Ginger Rogers.’ -Frank McCourt

What was moving, I think, was the fact that the statue is a woman and not a heroic, manly figure.

So for all her scale and immensity, there’s something soft about the Statue of Liberty, something tender about her. -Derek Walcott

A building can become an archetype, invisible, like for a New Yorker, for example, the Statue of Liberty.

You look at it, and it disappears into the thousands of times you’ve already seen it. -Chris Jordan

As Karl Rossmann, a poor boy of sixteen who had been packed off to America by his parents because a servant girl had seduced him and got herself with child by him, stood on the liner slowly entering the harbor of New York, a sudden burst of sunshine seemed to illumine the Statue of Liberty, so that he saw it in a new light, although he had sighted it long before.

The arm with the sword rose up as if newly stretched aloft, and round the figure blew the free winds of heaven. –Franz Kafka

The Lady with the Lamp, the Statue of Liberty, stands in New York Harbour. Her back is squarely turned on the USA. It’s no wonder, considering what she would have to look upon.

She would weep if she had to face this way. -Claudia Jones

Living in New York City, I am reminded by the Statue of Liberty that the United States of America has always welcomed those yearning to breathe free and seek a better life. -Charles B. Rangel

Out in the channel, the Statue of Liberty stood alone on her little island, her corroding flame held high in the air as the sun set over the industrial shoreline and skyways of New Jersey. –Andrew Cotto

We as Democrats have to remind ourselves and remind the country of the great principles we stand for. This is a place of protection.

This is not a country of bullies. We are not an empire. We are the light. We are the Statue of Liberty. -Jerry Springer

I’ve asked every grammar school teacher in the nation to have their students write on the meaning of the Statue of Liberty.

Wouldn’t it be wonderful if the winning kid got up to the microphone and, in front of the world, had to dig into a pocket to pull out a crumpled sheet of paper containing the words that would move us all? -David L. Wolper

And you have to remember that I came to America as an immigrant. You know, on a ship, through the Statue of Liberty.

And I saw that skyline, not just as a representation of steel and concrete and glass, but as really the substance of the American Dream. -Daniel Libeskind

It is not for nothing that that vivacious lady is standing up there with the torch of liberty in her hand, as a beacon to the whole world – take a look at the world through her eyes, if you really want to see something – and you won’t just see scenery – you’ll see the whole parade of what humans have carved out for themselves after centuries of fighting – fighting so they could stand on their own two feet, free and decent, no matter their race, religion and creed. –Abhijit Naskar

Many of America’s and New York’s sons and daughters are around the world fighting for the freedoms that the Statue of Liberty stands for. -Michael Bloomberg

The first time I saw America was from my perch on the mast of a Spanish naval ship, where I could spot the Statue of Liberty reaching proudly into the open, endless American sky. -Jose Andres

I’ve always had a strong feeling for the Statue of Liberty because it became the statue of my personal liberty. -David Antin

The Statue of Liberty is no longer saying, “Give me your poor, your tired, your huddled masses.” She’s got a baseball bat and yelling “You want a piece of me? –Robin Williams

I have a wonderful make-up crew. They’re the same people restoring the Statue of Liberty. -Bob Hope

The Statue of Liberty really is profound, I just wish she’d lighten up a bit. -Dov Davidoff

Thanks, Ms. Liberty! Is that a sari you’re wearing? I hope not. –Mitali Perkins

United States: the country where liberty is a statue. -Nicanor Parra

The last time I was inside a woman was when I went to the Statue of Liberty. -Woody Allen

Headed to New York? Check out my guides to renting a car in NYC, my Hamilton-inspired list of things to do in New York, and how to visit the Statue of Liberty. And of course, if you want New York Instagram captions, check out my massive list of New York quotes and fun New York Puns.