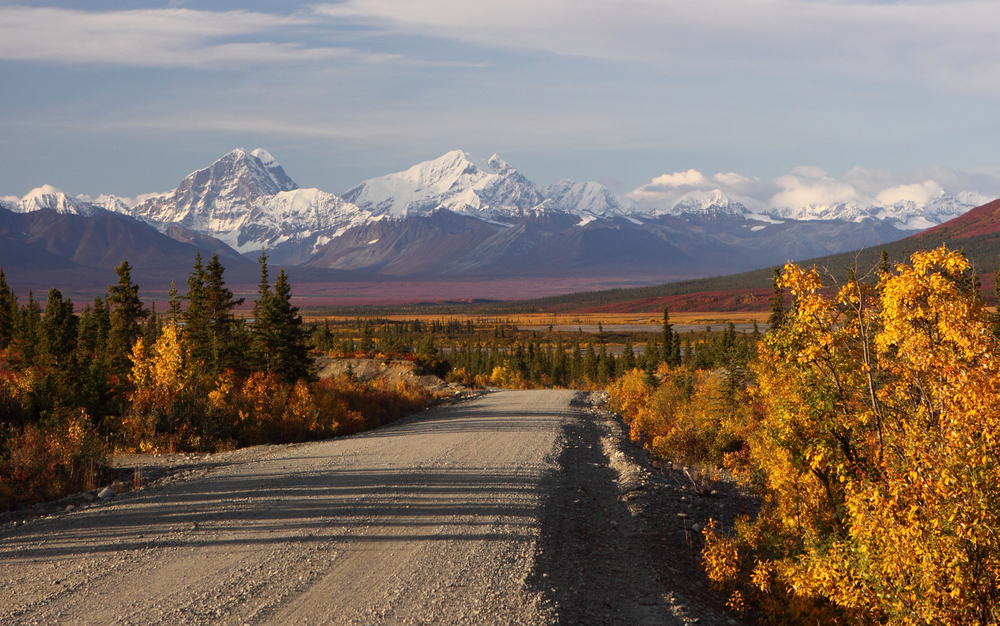 Yukon Charley Rivers National Preserve is a 4000 square mile area in Alaska, close to the border with Canada. The preserve was established in 1978 to protect the river basin. As there are no roads leading to the preserve, access is strictly by air or boat. The area also frequently sees harsh weather, making the preserve sparsely visited. Visitors can, however, enjoy exploring the preserve, particularly via float trips in the summer. While it is not been properly explored, the park is known as a fertile paleontological and archaeological site. Remains of several cabins, used during the Klondike gold rush and still in use today, can be found in the park.

Located in the northwest of Alaska, Kobuk Valley National Park is a 2700 square mile wilderness area established in 1980 to preserve the natural forms of the Kobuk River Valley. One of the major attractions in the park is the Great Kobuk Sand Dunes which cover an area measuring 25 square miles and are believed to have formed over 150,000 years ago. The area is also notable for its wide range of flora and fauna and archeological sites, some of which hold evidence of human activity going back 12000 years. While the park can be reached only by air, a visit at the right time might yield an incredible view of caribou migration.

Klondike Gold Rush National Historical Park is a 13000-acre park with units in Alaska and Washington. Established in 1976, the park commemorates the 1897 Klondike Gold Rush which saw over 40,000 people making several trips to the goldfields via the 33-mile Chilkoot Trail. Exploring the park via cruise ships is a popular choice due to the opportunity it affords to view the stunning landscape of valleys and streams. In addition to viewing artifacts and exhibits at the park’s many museums, visitors can also learn more about the area’s history at the visitor center. Outdoor activities like camping, rafting, wildlife viewing, and hiking can also be enjoyed.

The Inupiat Heritage Center, created in 1999, is a museum in Alaska that documents the history of the Iñupiat people and commemorates the contributions of Alaska’s native tribes to whaling history. The museum is affiliated with many other parks and institutions dedicated to preserving the history of commercial whaling. The center offers several educational and interactive programs aimed at understanding and appreciating the culture of the Inupiat people. In addition to exhibits and artifacts, the museum also features a library and gift shop. There’s also a traditional room where native artists and elders teach traditional crafts like dressmaking.

The 13000 square mile Wrangell-St. Elias National Park and Preserve, located in Alaska, is the largest unit of the US National Park System. Established in 1980 and designated a UNESCO World Heritage Site in 1979, the area encompasses some of the highest peaks on the North American continent. Massive glaciers and high reliefs are abundant features of this extraordinary landscape, portions of which account for the largest wilderness area in the US. Park activities include mountain biking, birding, hunting, horseback riding, whitewater rafting, ice climbing, wildlife viewing, and backpacking. Guests can also learn about the many historical sites that litter the park at the visitor center.

The 112-acre Sitka National Historical Park in Sitka, Alaska, was established in 1972 to preserve the histories of the native and Russian inhabitants of the area. Known as Indian River Park and Totem Park at different times in the past, the park is famous for the native totem poles displayed all over it. Many other historical landmarks can be seen across the park, including the remains of a fort that served the Tlingit Indians during the 1804 battle with Russian hunters. The park also includes The Bishop’s House, which is the seat of the Russian Orthodox Church in North America, and the oldest undamaged Russian building in the US.

Established in 1980, Glacier Bay National Park and Preserve is a 5000 square mile natural expanse in the southeast of Alaska. The landscape is characterized by huge glaciers, jagged mountains, deep fjords, and pristine coastlines. Due to the stunning natural beauty and variety of plant and animal life, the region is designated by UNESCO as a World Heritage Site and Biosphere Reserve. Visitors usually explore the area via cruise ships and boats that reach the remotest parts of the park. Hiking, fishing, bird-watching, rafting, mountaineering, and camping are some of the most popular activities that guests participate in.

Gates of the Arctic National Park and Preserve

The 13,000 square mile Gates of the Arctic National Park and Preserve in northern Alaska is the second-largest as well as the northernmost park in the US. Established in 1980, the park aims to preserve the region’s unspoiled wilderness and portions of the Brooks Range. The park is accessible only by air and is the least visited national park in the US. As there are no lark facilities or visitor centers, activities are limited to rafting, hiking, fishing, and cross-country skiing in wintertime. Exploring the area provides stunning views of mountains, valleys, lakes, wild rivers, and several species of wildlife.

The Alagnak Wild River, also known as the Branch River, is a 64-mile river in Alaska, US. It is a tributary of another 64-mile body of water, the Kvichak River. Designated as a Wild and Scenic River in 1980, the Alganak originates from Kukaklek lake in Katmai National Park and Preserve and has a catchment area measuring about 1400 Square miles. Following the river’s course provides a front-seat view of picturesque wilderness, unique wildlife, and the beautiful countryside. There’s an abundance of activities to enjoy on the Alganak Wild River including, whitewater rafting, kayaking, canoeing, and fishing. Visitors can also hike some portions at the source.

Aleutian World War II National Historic Area, established in 1996, is a 134-acre Historic Site on Amaknak Island, Alaska. The area documents the history of the Aleut people during the second world war as well as the role of the Aleutian Islands in that conflict. Invaded and occupied during the war, the area witnessed a 15-month long air assault, which left an impact on the landscape that can be seen today. In addition to viewing exhibits and photographs from the period at the attached museum, guests can also enjoy a virtual tour of the entire area at the visitor center and learn about the fate of the native people during the war.

Established in 1980, Lake Clark National Park & Preserve, is a 6000 square mile expanse in Alaska that protects a wide range of natural features from rain forests to glaciers and volcanoes. The park is notable for its biologic and geologic diversity and the ruggedness of the landscape. In addition to experiencing the spectacular natural beauty, visitors can enjoy many activities including fishing, camping, wildlife viewing, hiking, rafting, kayaking, and more. Many historic sites and artifacts can also be found within the park. Visiting requires proper planning as the area, which is home to the Dena’ina people, can only be reached by air.

Katmai National Park and Preserve is a wilderness area covering over 6300 square miles in the southwestern part of Alaska. Established in 1980, the park derives its name from Mount Katmai, its major volcano and one of the eighteen present within the park. Seven of these volcanos are active and the 1912 eruption of one, forming the 40-square-mile Valley of Ten Thousand Smokes, led to the designation of the area as a national monument in 1918. While Katmai remains famous for its volcanic landscape, there are many other features visitors can enjoy such as camping, fishing, hiking, and wildlife viewing.

Aniakchak National Monument and Preserve is a 600000-acre area in southwest Alaska. The monument’s main feature is a 6-mile wide crater which is believed to have formed over 3500 years ago following a volcanic eruption. Established in 1978, the area encompasses several geologic features including volcanoes, valleys, mountains, lakes, and a wild river. Although the area offers a unique view of a geothermal landscape, it sees few visitors due to its remoteness and often inclement weather. Visitors can only reach the location by air and must either be self-sufficient or employ guiding services as there are no official facilities within the area.

See also
The 10 Best US National Parks for Seniors

Among the most remote national parks in the US, Bering Land Bridge National Preserve was created in 1978 to protect the remains of the bridge that connected the Asian and North American continents in prehistoric times. Located in Seward Peninsula, Alaska, the 2.8 million-acre preserve contains several archaeological sites and surreal volcanic landforms. Even though the area can only be accessed by air, the colorful landscape and natural features like lava flows, hot springs, and shallow lakes continue to draw many visitors. The preserve is also a prime location for viewing unique flota and fauna as many plant species, marine animals, and migratory birds populate the area.

Located in south-central Alaska, Kenai Fjords National Park is an over 600000-acre park that protects one of the biggest icefields in the US as well as several glaciers, fjord, and islands. Established in 1980, the area comprises many historical sites most of which are related to gold mining. The park welcomes several thousand visitors annually and can be accessed via road, air, boat, and rail. Several companies provide boat cruises and bus tours exploring the interior of the park. For a fee, visitors can stay at public shelters in the park while enjoying recreational activities such as fishing, marine life viewing, and hiking.

Established in 1980, Cape Krusenstern National Monument is a 1000 square mile wilderness area in northwest Alaska. The monument was created to preserve the 114 beach ridges which hold evidence of human habitation as far back as 9000 years ago. Archeological excavations over the years have revealed many artifacts from the various cultures that have inhabited the region. Due to the monument’s location above the arctic, the weather tends to be extreme. Visits must be properly planned to avoid hypothermia.  The park is suitable for hiking, boating, and viewing of many unique and endangered animal species. Guests can explore the visitor center where they can learn more about the native Iñupiat people.

See also
What to Eat in Arkansas: 25 Dishes Highlighting the Best of Arkansas Food & Drinks

Denali National Park and Preserve, a 9,500 square mile expanse in Alaska, is, arguably, the most popular attraction in the state. Known as Mount McKinley National Park until 1980 when the preserve was established, the area features millions of acres of wilderness as well as North America’s tallest peak. The region is popular with mountaineers due to the presence of several peaks reaching above 10,000 meters in height. Summer is the best time to visit the park as visitors can easily explore the visitor center and camp overnight. Several mammals, 150 species of birds, and about 2000 plant species can be found in the present which was designated an international biosphere reserve in 1976 by UNESCO.