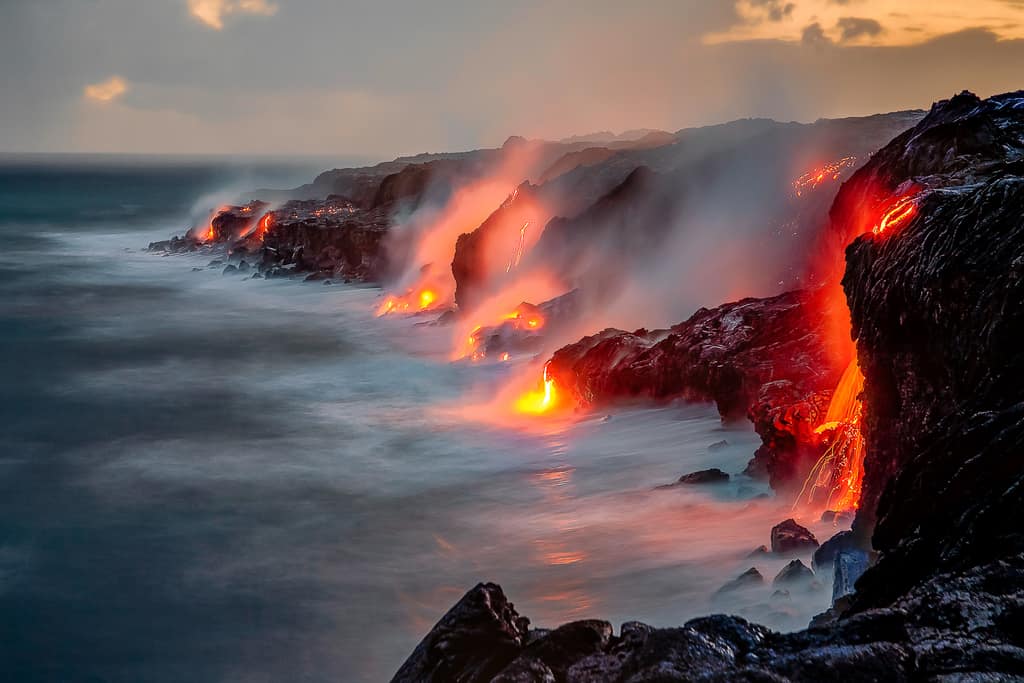 Named to mean “trail by the shoreline”, the Ala Kahakai National Historic Trail was established in 2000 to preserve the Hawai’ian culture and history. The 175-mile trail which is located at 73-4786 Kanalani Street, Kailua-Kona, transports you on a journey through the natural and enchanting elements of the island including the sandy shores and lava flows.

The national park is home to interesting wildlife including sea turtles, bats, and the species of dragonfly renowned for being the largest in the world, all of which can be seen while exploring the park.

Visitors are advised to exercise caution when exploring near the lava flows and ocean shoreline so as not to fall.

Authorized as part of the Hawaii National Park in 1916, the Haleakala National Park was named to mean “House of the sun”. The park, which is located on the Haleakala Crater on the south-central part of Maui island, includes a dormant volcanic site with one of the largest craters in the world- 12 kilometers long, 4 kilometers wide, and a circumference of 30 kilometers. Also included as part of the park’s attractions are Kipahulu Valley and the Oheo pools.

Visitors can explore the park’s attractions on a 48-kilometer trail, however, only a maximum of 12 persons are allowed per group. The entirety of the park may be covered in one day or split into more days, in which case, visitors may camp at the Summit District or the Kipahulu District.

Hawai’i Volcanoes National Park is located 72.4 kilometers southwest of Hilo on the shores of the island of Hawaii. The park spans 1,308 square km, and is home to two active volcanoes namely Mauna Loa, known as “the earth’s largest volcano”, and Kilauea, which is often called the “world’s only drive-in volcano”. The volcanoes are 40 km apart, the former last erupted in 1984 and the latter, in 2018.

There are several hikable trails on the park for visitors to explore, including the Pu‘u o Lokuana Trail, Kamakapa‘a Trail, Palm Trail, Pali o Ka‘eo Trail, Pit Crater Trail, the Glover Trail, and the Kona Trail.

In the past, the site served as an internment camp for 4,000 prisoners of war during the second world war, the majority of whom were Japanese American. Today, the historic site serves to educate visitors of the wartime practices of the past and to remind them of their civil rights and the importance of maintaining them even during civil unrest.

Visitors can watch a 30-minute documentary depicting the internment experience of Japanese Americans in Hawaii. Visitors may also visit education centers, such as the King Kamehameha V History Center house which displays photographs, and artifacts that show how civilians lived during the second world war.

After the onset of leprosy in Hawaii in 1866, King Kamehameha V banished all infected persons to the isolated Kalaupapa peninsula. Up until 1969, over 8000 people died from the disease, however, today, Kalaupapa is home to the people who have beaten the disease.

After its ascension into a national park in 1980, the peninsula serves as a beacon of contemplation and resilience for everyone and an avenue to preserve the memories and travails of the people who lived there. It is important to note that visitors are prohibited from taking pictures of the patients’ residents without permission.

Kalaupapa park is not just a place for reflection and education, it is also home to rare and beautiful plants and animals such as the green sea turtle and the humpback whale.

In the past, the Hawaiians fished in the waters and farmed on the lands of the Kaloko-Honokohau National Park. The park spans 1,100 acres and is bursting with indigenous Hawaiian culture, history, and wildlife, a lot of which are endangered species e.g.the green sea turtles. The park’s land is used to preserve two ancient ahupuaa (sea-to-mountain land divisions), on which the ancient Hawaiians farmed and lived.

Visitors may go on a mile-long hike along the coastal trail which is bound to reveal some, if not all of the park’s attractions. An example is the collection of old fishponds which are protected by giant lava rocks. The waters are now home to several species of native water birds such as the Hawaiian stilt (aeo) and the Hawaiian coot (alae keokeo).

The Pearl Habour Memorial was built to remember and honor the lives of the people who died when the Imperial Japanese Navy attacked the United States on December 7, 1941. The attack is known as the one that incentivized America to join the second world war.

The memorial was built on Oahu Island and includes nine other historic sites, each serving to represent a different part of the second world war. There are several museums and film parks that help to educate visitors on the many vents that occurred during the war, however, entry to the park and participation in all events are free of charge.

Pu’uhonua o Honaunau, meaning “place of refuge at Honaunau” earned its name because of how it accepted anyone who sought out safety from the Kapu system on its lands, south of the Kona Coast. It did so for three hundred years before the system was trashed in 1819. After the abolishment of the Kapu system, the sanctuaries were deserted or destroyed, however, they still retained their significance.

The area spans 420 acres and is filled with several archeological artifacts which tell the story of the old Hawaiian ways. Visitors can enjoy certain aspects of these old ways such as the Pu’uhonua o Honaunau annual cultural festival in June, where they can enjoy events like food tastings, archeological hikes, hula performances, and other native activities.

Pu’ukohola Heiau or “Hill of the whale” got its name when King Kamehameha was told that he would rule Hawaii if he honored the war god Ku by building a temple on Pu’ukohola. Construction of the temple began in 1790, and it took a year and over 1000 workers to complete the monument.

Although visitors may hike around this historic site, they are prohibited from entering the walls of the Pu’ukohola Heiau. However, the trails lead to the ancient royal courtyard, the abode of John Young, Kamehameha’s military adviser, and two other temples, one of which was dedicated to the shark gods.