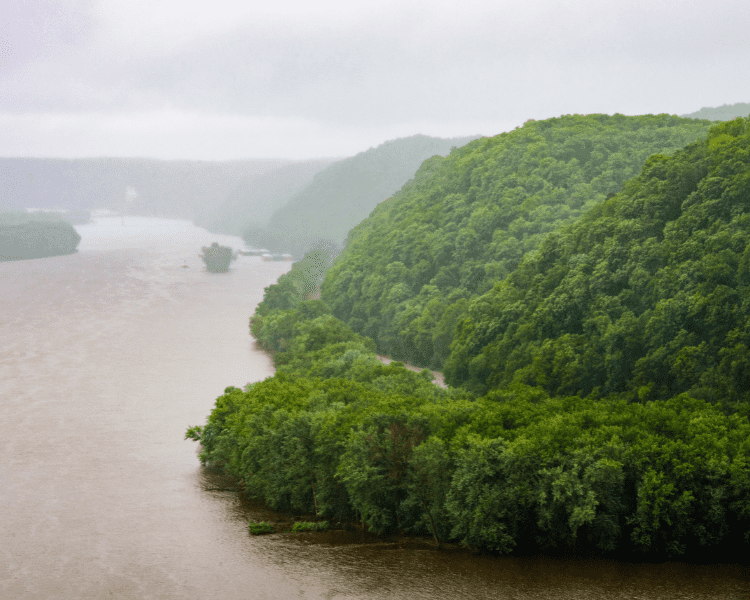 Over 200 prehistoric mounds are preserved within the grounds of over 2500 acres of the Effigy Mounds National Monument tucked in the Upper Mississippi River Valley lowlands of Iowa. These treasured mounds are said to have been made by mound builders of pre-Columbian heritage known as Woodland Indians who have origins dating back to 500 B.C. Although native American mounds are known to be spread across a number of locations in the U.S., the Effigy Mounds are unique because they are shaped like animals such as bears, reptiles, and birds. This National Monument was established in 1949 and has since preserved several samples of pre-contact Native American mounds. These mounds are considered to be very sacred to about twenty American Indian cultures. Visitors to the Effigy Mounds National Monument get to witness these artifacts for themselves and feel the history that they represent to native American culture. Visitors also enjoy the scenic views of the Upper Mississippi River Valley. The historic mounds in 2017 were featured in the America the Beautiful Quarters Program.

This historic site was the birthplace of the 31st U.S. President Herbert Hoover, who was very well known for his passion for public service, his benevolence, and for being a staunch humanitarian. President Herbert Hoover was born in the year 1874 inside a tiny two-bedroom cottage. The cottage together with some other significant buildings having historic ties to the President are today being preserved within the Herbert Hoover National Historic Site including a blacksmith shop recreated to look like the one his father owned. Other buildings include the first West Branch schoolhouse and the Quaker meetinghouse which was where he and his family worshipped. In 1928 President Hoover assumed office, this led the cottage to fall into private ownership, eventually becoming a tourist attraction. Following this development, the President acquired the property in the 1930s and worked towards transforming the site into a park that recreated the former president’s childhood environment and home. In the 1960s, the Herbert Hoover Presidential Library and Museum was opened, it preserves the president’s presidential papers among other items. The Park which spans over 180-acres is also where the late President and his wife are today buried.

The Lewis and Clark Expedition, also known as the Corps of Discovery Expedition which was held from the year 1804 to 1806 is commemorated with this National Historic Trail. The trail runs almost 5000 miles from Pittsburgh, Pennsylvania to the Columbia River, Oregon following the outbound and inbound routes of the Lewis and Clark Expedition including the preparatory area from Pennsylvania to Illinois. The Lewis & Clark National Historic Trail passes through and connects sixteen U.S. states including Iowa, Illinois, Missouri, Kansas, Nebraska, South Dakota, North Dakota, Montana, Idaho, Washington, and Oregon. It is the second-longest trail out of the 23 National Scenic and National Historic Trails in the United States. In 2019, the John D. Dingell Jr. Conservation, Management, and Recreation Act added a 1,200-mile extension along the Ohio and Mississippi Rivers from Pittsburgh, Pennsylvania to Wood River, Illinois. Although this trail is not a designated hiking trail, it does make provisions for hiking and other fun activities for visitors to enjoy such as boating, horseback riding, scenic walks, and more.

This trail is a 1,300-mile-long route which in the year 1846, members of The Church of Jesus Christ of Latter-day Saints (also known as Mormons) passed through, traveling for three months. The trail spans from Nauvoo, Illinois to Salt Lake City in Utah. Collectively known as the Emigrant Trail, the Mormon Pioneer National Historic Trail leads the same path as Oregon Trail as well as the California Trail. This move by the Mormons is considered to be the best mass migration in American history. The Mormons established strong communities despite the harsh natural conditions they were met with. A total number of about 7,000 Mormons plied this historic trail from the year 1846 to 1869 with the trail starting from Nauvoo cutting through Iowa to connect with the Great Platter River Road before ending near Salt Lake in Utah. The Mormon immigrants used the trail for over twenty years to migrate to their new home in the Great Basin which today has become the American State of Utah.