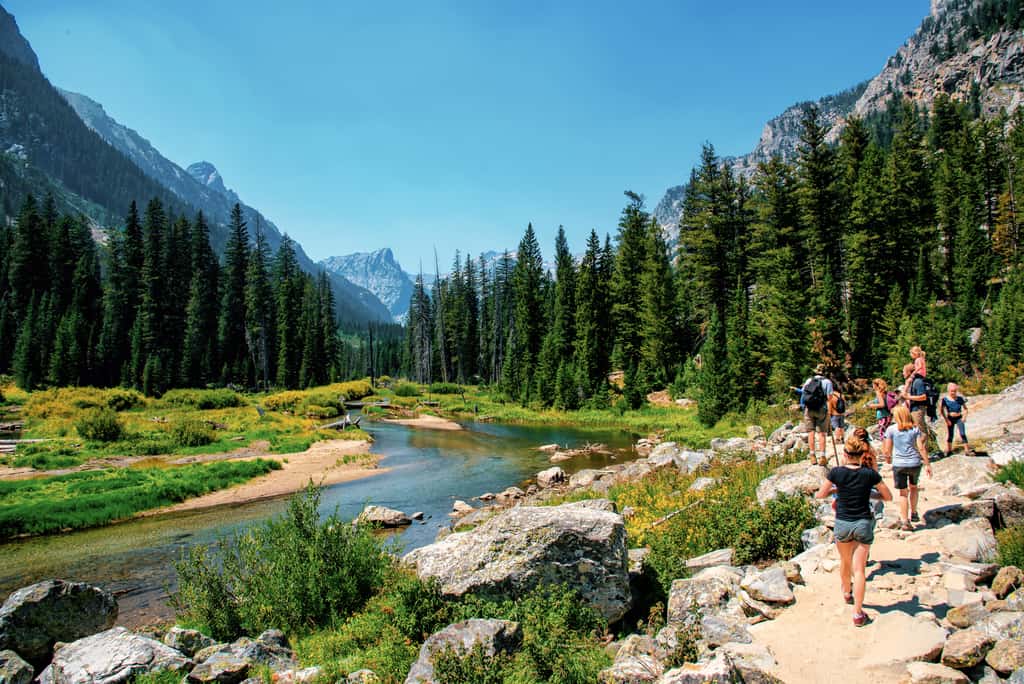 A guide to the best national parks in Wyoming!

Grand Teton National Park is a 310,000-acre natural expanse located in Teton County, Wyoming. The area was designated a national park in 1929 with the aim of preserving the major peaks of the famous Teton Range. Visiting the park is a spectacular experience due to the abundance of natural wonders. From pristine lakes and prehistoric flora and fauna to 2 billion-year-old rocks, Grand Teton National Park has something for everyone. In addition to exploring the many visitor centers, guests can camp out, climb mountains, fish, and hike over 200 miles of trails. Lucky visitors might also catch a glimpse of the bison herds regularly roaming the area.

The California National Historic Trail is a 5000-mile migrant route famous in American history for facilitating the migration of over 250,000 people to California during the Gold Rush. 472 miles of the trail can be seen in Wyoming while the entire trail passes through 10 states. Designated as a national historic trail in 1992, the lands are managed by the National Park Service and Bureau of land management. Visitors to the trail can participate in an auto tour, enjoy educational programs, and learn more about the trail’s history at the visitor center.

The trail saw heavy human traffic until the transcontinental railroad was completed in 1869.

Fossil Butte National Monument, located in Lincoln County, Wyoming, preserves plant and animal fossils some of which are more than 50 million years old. The area, remains of the now dried-up Fossil Lake, was established as a national monument in 1972 and is managed by the National Park Service. Visitors to the monument will enjoy exploring the visitor center where they can view over 80 fossils and watch an informative video about them. The monument also features a museum and bookstore for those wishing to learn more. There are two scenic trails measuring 4 miles in total that visitors can hike if accompanied by a ranger.

The Oregon National Historic Trail is an over 2000-mile stretch used by migrants and traders throughout the 19th century. While the entire trail spans 6 states, ruts on the eastern part of the trail can be seen in Wyoming and Nebraska. Visitors can explore the trail at no cost but might have to pay to experience some of the historic sites and nearby interpretive installations. Depending on which part of the trail they’re visiting, guests can visit museums, ride on horseback, bike, and tour the trail on their own. However, as many parts of the trail are rugged, care should be taken when doing these activities.

Yellowstone National Park, arguably the most famous park in the U.S, was established in 1872. While much of the park lies within the state of Wyoming, it stretches across Montana into Idaho. Besides the innumerable species of plants and animals found at the park, it is also famous for archeological sites, mountain ranges, lakes, and canyons. The park, which covers over 3,400 square miles, was named a UNESCO World Heritage Site in 1978. Visitors to the park can engage in several activities including hiking, fishing, camping, and boating. The park regularly sees more than 2 million visitors each year.

Fort Laramie National Historic Site, which preserves the rehabilitated remains of the Old Fort Laramie, is located in Goshen County, Wyoming. Fort Laramie, founded in the 19th century as a fur trading post, also served as a diplomatic site and military installation after being purchased by the US Army in 1849. The fort, which closed in 1890, was also known as Fort William and Fort John at different times of its existence. The 833-acre expanse, which was established as a historic site by the National Park Service in 1931, welcomes more than 40,000 visitors yearly.

Devils Tower National Monument, also known as Bear Lodge Butte, has the distinction of being the first U.S. national monument. Located in Crook County, Wyoming, the monument covers an area measuring over 1000 acres. Established in 1906, the monument features several sedimentary rocks and a natural rock tower measuring 867 feet. The tower, a sacred site for indigenous people and a popular spot for rock climbers, is probably responsible for the 400,000 annual visitors to the monument. Each year, an estimated 40,000 people climb the tower, reaching the summit which is over 1500 meters above sea level.

Bighorn Canyon National Recreation Area is an over 120,000-acre expanse along the Wyoming-Montana border. The area was established by US Congress as a national recreation area in 1966. Parts of the park is home to the Crow Indian people while about 80% of Bighorn Lake flows through the area. There’s no shortage of activities to enjoy and the Bighorn Canyon National Recreation Area saw more than 200000 visitors in 2011. Guests can spend time in the 4 historic horse ranches within the area, explore the two visitor centers nearby, fish in the Bighorn River, camp, boat, and hike.

Mormon Pioneer National Historic Trail is a 1,300-mile migrant route long stretches of which can be seen in Wyoming. Starting from Illinois and passing through 5 states, the trail was primarily used by the Mormon congregation during their west-bound exodus in the 19th century. In 1978, the trail was established as part of the National Trails System to honor the trek. While a significant portion of the trail is no longer visible, there are several landmarks along it that will be of interest to those wishing to know more about the Mormon’s journey. As the trail is managed by government agencies and private citizens, exploring parts of it might require getting permission from private property owners.

The Pony Express National Historic Trail is a 1,900-mile route that runs through 8 states. The route was used mainly from 1860 to 1861 by horse riders carrying mail from one side of the country to another. The trail, which became a National Historic Trail in 1992, is mostly managed by the Bureau of Land Management. There are over a hundred historic sites along the trail but most of them are not open to the public. Visitors to the area can, however, visit the museums, tour the route and explore the various stations, as well as camp, bike, and hike parts of the trail.