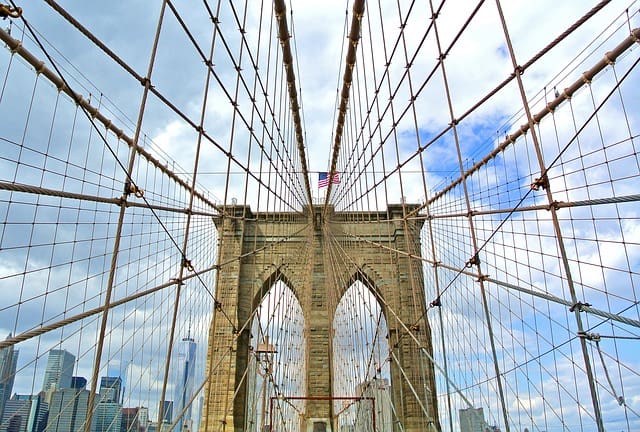 The Brooklyn Bridge is one of the most prominent landmarks in New York. Whether you choose to walk Brooklyn Bridge or simply appreciate it from afar, check out this interesting history of the bridge!

The construction of the Brooklyn Bridge changed New York City forever, connecting the suburb to Manhattan, and establishing the borough as a vital part of the city’s life and culture. It’s easy to look at a bridge now and say, “Of course that bridge had to be built.” But why, exactly, did city leaders want to connect Brooklyn and Manhattan, how did the people who lived there at the time feel about it, and how did elephants help make the bridge a landmark? Today, my guest is Ariel Viera from Urbanist, who you may remember walked us through the history of Central Park in episode 14. Also, there are river pirates. Ariel lives and breathes the history of New York, and the stories he has about the Brooklyn Bridge will have you looking at the city in a whole new way.

BBB: Before the Brooklyn Bridge

In the mid-1800s, there were two separate cities: Brooklyn and New York (what we now call Manhattan). And to get from one to the other, you’d have to take a ferry. But as Ariel told me, New York’s traffic troubles go back to before the time of taxicabs: The East River was full of ships going from port to port, and a ferry had to contend with that marine traffic. And there were many ferries going back and forth, from street to street, in Brooklyn Heights and Manhattan, and the system became a bit cumbersome. So, Brooklyn actually proposed building a bridge which, because of the width of the East River, was not going to be easy.

The East River is actually wider than the Thames, known for its many bridges, so the engineering problem of spanning the river while still allowing boat traffic was a vexing one. Enter architect John Roebling, who had created a steel wire much stronger than what had been used for bridges before. He had the brilliant idea to use that wire to build a bridge strong enough to reach from shore to shore. But what’s interesting is that even if the engineering required innovation, many criticized the bridge’s design as too plain. But as Ariel tells me, that was actually done on purpose, and the story behind that decision is fascinating.

The building of the bridge

The ironic tragedy of John Roebling’s life is that it was cut short before the Brooklyn Bridge was built. He was actually crossing the East River on a ferry when a cargo load fell on his leg, and he would later die of complications from the injury. His death came in 1869, the same year construction began on the bridge. Luckily, his son Washington was establishing himself as an architect, and he was able to take over the project. But the building of the bridge took all the way from 1869 to 1883 and wasn’t without incident. As Ariel told me, there were problems with workers going so deep into the river to secure the bridge, and Washington Roebling himself suffered paralysis from going so deep when the caissons were being placed. But the Roebling family endured, and you’ll want to hear what Washington’s wife, Elizabeth, did next.

As Ariel tells me, the first few years of the bridge were tumultuous. People flocked to it to cross it, others didn’t trust that it was safe. Shortly after its opening, a woman on the bridge screamed that the bridge was collapsing, and 12 people died in the stampede that ensued. That brought out P.T. Barnum, who marched his elephants across the bridge to demonstrate how safe it was. And those are just a few of the stories Ariel told me in this really fun, funny history lesson about the Brooklyn Bridge. You’ll have to listen if you want to hear about those pirates.