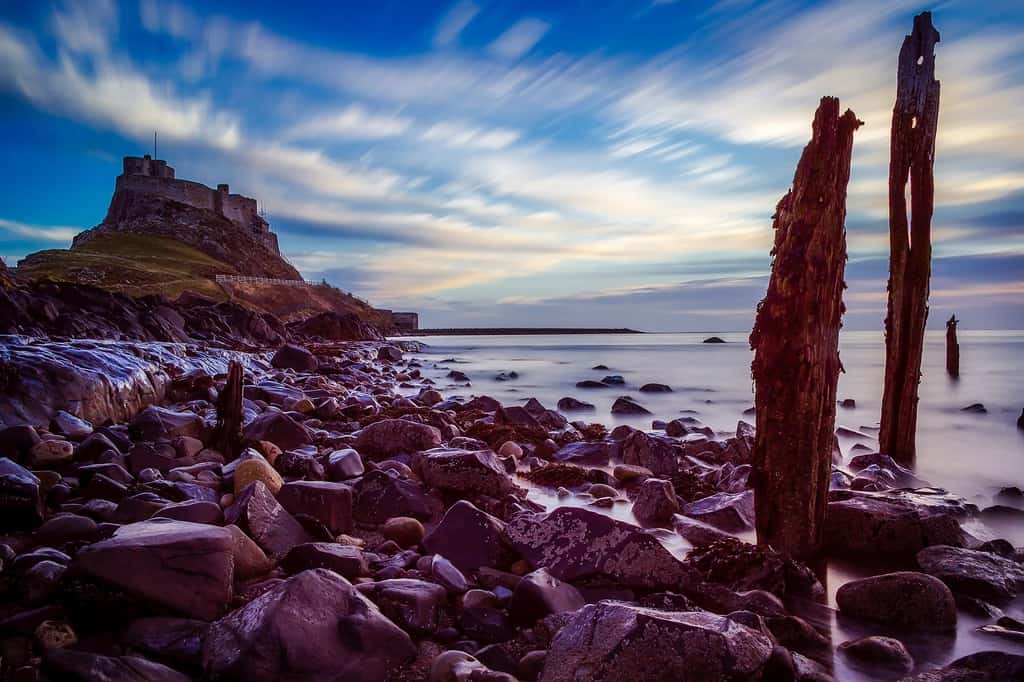 Maybe you’ve heard of the Book of Kells or the Gospel of Lindisfarne: These illuminated manuscripts are not only high works of religious text, but doors that open history to current scholars. Today on the show we’re talking about Lindisfarne, the island on the northern edge of England, where the monks who wrote that book lived My guest today is Dr. Michael Drout. He’s a professor at Wheaton College in Massachusetts and the author of How Tradition Works and Tradition and Influence, and the author of some of my favorite “modern scholar” online courses. We talk about the founding and sacking of Lindisfarne, how the writing of the Gospel of Lindisfarne changed the English language, a saint who used otters as beach towels.

[bctt tweet=”On this week’s episode we talk with @mikedrout about the colorful history of Lindisfarne. #HistoryFanGirl” via=”no”]

The fickle tides of Lindisfarne

Lindisfarne is an island in Northern England, near Newcastle, with an unusual geography. Lindisfarne is technically only an island for part of each day. When the tide goes out, there is a causeway that allows visitors to drive from the mainland to Lindisfarne. But when that tide comes in, it’s back to being an island. (And, as Michael tells me in this episode, people get stuck on the causeway fairly regularly.) But that semi-isolation actually proved attractive to monks, who wanted a place to be separate. And so as early as 635 A.D. they built a monastery there, and Lindisfarne immediately became the center of what we think of as the golden age of English monasticism. And that reigned until, of course, the Vikings sacked it in the late 700s.

See also
The Ultimate Itinerary for Spending One Day in Exeter: Things to Do & What to See!

[bctt tweet=”The historic island of Lindsisfarne is actually only an island for the part of the day, until the tide goes out. #HistoryFanGirl” via=”no”]

Religious feats of strength at Lindisfarne

After winning what you could call a come-from-behind victory at the Battle of Heavenfield, Oswald, King of Northumbria, credited his placement of a cross on the battlefield with the win. So Oswalt invited monks, many of them Irish, to Northumbria to build a monastery. Oswald had also seen the monks of Iona perform religious “feats of strength,” like reciting scripture while waist deep in freezing water, and had been impressed by that. So he brought monks to Lindisfarne to not only deepen his relationship to God, but to help convert his people to Christianity.

[bctt tweet=”Find out what “religious feats of strength” won over Oswald, King of Northumbria in the 7th century. #HistoryFanGirl” via=”no”]

When the monks weren’t busy praying, or singing, or singing in prayer, they did make the famous Lindisfarne Gospel, a beautiful, illuminated text. Along with the Book of Kells, it’s considered one of the most beautiful books of the Western monastic tradition. And the writing of those books by different groups was not without its rivalries. But one of the most fascinating things that Michael said to me in a very fascinating conversation was how those rivalries, the argument over which Christian traditions should be followed, actually had a huge impact on how English is written.

[bctt tweet=”Find out how a monastic rivalry shaped the English language. #HistoryFanGirl” username=””]

The history of Lindisfarne is incredible, and Michael spins so many great stories of what happened there, what life was like for the monks, how and why the Vikings raided. There’s even a personal favorite anecdote, about St. Cuthbert, who—legend has it—would swim in the waters, and otters would follow him onto land to dry his legs with their fur. And we won’t spoil it here, but you have to hear the unusual story of St. Cuthbert’s coffin. This was a really fun episode with a guest who helped further my love of history before I ever talked with him.

1 thought on “The Colorful History of Lindisfarne”