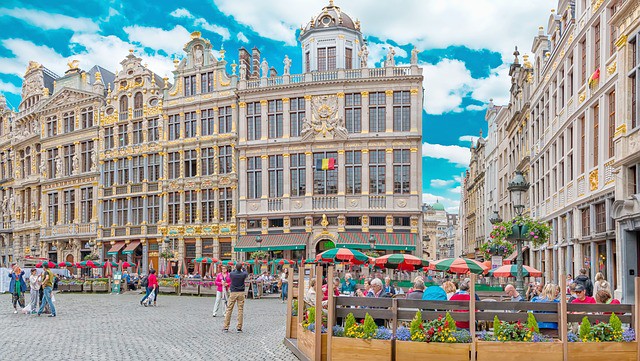 Listen to the Episode “The Grand Place”

Brussels, Belgium is an often-overlooked city, with neighboring capitals of Amsterdam and Paris stealing the spotlight. But Belgium is definitely much more than just great beer and chocolate. My guest today is Drew Vahrenkamp of The Wonders of the World podcast, and we sit down to chat about Brussels’ La Grand-Place, or Grand Place, the city’s central square. Drew is a self-described Belgiumphile, having studied there while in business school. As he told me, on his first trip to Brussels, he just decided to head to the center of the city to see what was there and was blown away by La Grand-Place. If you’ve never thought much about Brussels beyond its famous Belgian waffles or its famous fries, you’ll want to hear Drew discuss this gorgeous city. But don’t worry, we also talk about the beer. (Check out this great gay guide to Brussels for proof on how much the city has to offer)!

The history of Brussels

As Drew tells me in this episode, Brussels is a very unpretentious place, beginning with the name of the city. “Brussels” is a Dutch name that essentially means “home in a swamp.” As he says, Brussels was a small town on the Senne river. But like a lot of river towns, it was in the middle of a trade route with cities of Cologne, Ghent and Brugge. And when it was founded in around 979, it became an important cog in the textile industry. At first, it really was just a trading post. But after the plague hits, and laborers become more scarce, we see a rise in a middle class of laborers and a rise in prominence of Brussels. And that leads to the establishment of the Grand Place.

[bctt tweet=”Belgium is more than just waffles and beer and fries and chocolate. But if it wasn’t, that’d be okay, too.” via=”no”]

The early days of The Grand Place

For some time there had been some indoor trading markets in the center of Brussels. But in the early 1400s, the notion of a center square starts coming together. And it begins with the building of an amazing town hall, which borrows its architecture from the Gothic churches of the time. The city hall actually still stands today as the only medieval building on the square. The rest of the buildings, including many houses, were flattened by Louis XIV of France in 1695, who marched his army through Brussels on his way to invade Holland. So after the armies left, Brussels rebuilt, and they built in a totally different style, with baroque and Rococo influences. And because all of those buildings were erected over a five-year period, there’s a beauty and consistency to the square that makes it a truly unique place to visit in Europe.

What’s in the Grand Place?

Drew takes us on a brief tour around the square, starting with two of the most recognizable landmarks, the Gothic town hall, and then the Maison du Roi, which translates to the “king’s house,” which is funny because Belgium has never been much of a kingdom. But the building also houses the Museum of the City of Brussels, dedicated to the history and folklore of the city. The guild halls that also lined the square were eventually turned into private residences, one of which was Karl Marx’s home at one point. We also talked about how, as Lutheranism had begun to spread in the 16th century, the Spanish controlled the country. And they captured some Lutheran preachers and burned them at the stake in the middle of the Grand Place, making them the first martyrs of Protestantism.

[bctt tweet=”.@wonderspodcast tells me about the beautiful architecture and historical significance of Belgium’s Grand Place. There’s only one beheading, I promise.” via=”no”]

What to eat in Brussels

Belgium is a humble city. As Drew says, its most famous landmark is a three-foot-high statue of a kid peeing into a fountain. It’s a working city that the government didn’t work too hard to preserve, but The Grand Place remains one of the most beautiful places in the city, if not Europe. But there are some great places to visit, like the Magritte museum, and the comic strip museum (Belgians love comics). And, of course, Drew and I break down where you need to eat and drink in the city. If you’re thinking of heading to one of the most unsung cities in Europe, you need to listen to this episode.

[bctt tweet=”Hear @wonderspodcast and I argue about whether a particular Belgian beer is weird or magical. #TeamWeird” via=”no”]

Outline of this Episode

1 thought on “The Grand Place”