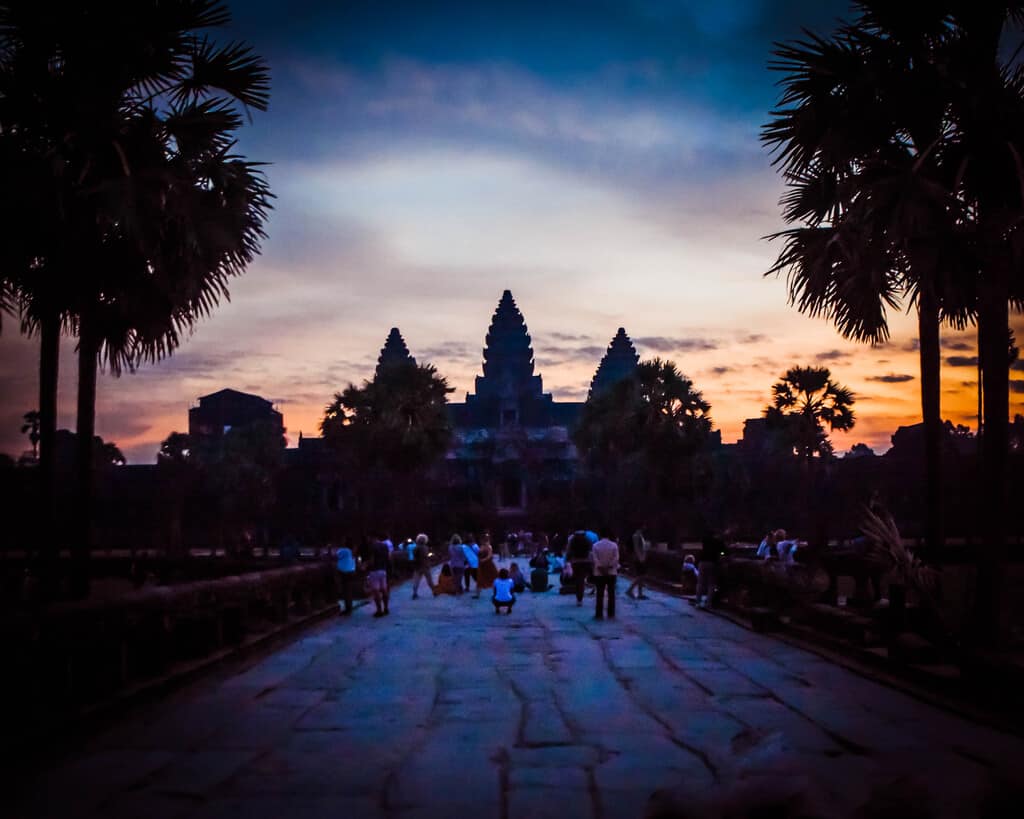 Angkor, along with its most famous temple Angkor Wat, is one of the most unique places in the world and one of the best places to visit in Cambodia. The French claim to have discovered it when Cambodia was part of French Indochina, but like so many “lost” places the locals always knew about it.

However, much of what we know about the ancient city comes from inscriptions and other artwork on the temple. And because the jungle climate much of the other information we have about the city may be lost forever, but we do know that it was the largest pre-industrial city in the history of the world. My guest today is Drew Vahrenkamp of the Wonders of the World podcast.

We chat about the ancient history of Angkor, how tourism in the city has changed dramatically over the last two decades, and how history lovers grapple with the ancient past of Cambodia, and the more recent reign of the Khmer Rouge.

The Difference Between Angkor and Angkor Wat

Drew told me that “Angkor” is actually Khmer for capital, and so Angkor Wat translates to the capital temple. The city of Angkor was so massive, so populated, that at its peak (from about the ninth century to the 14th century) one out of every thousand people on Earth lived in the city. Angkor Wat, of course, is the prominent temple and landmark of Angkor, and a depiction of it actually sits in the center of the Cambodian flag.

It’s literally at the center of Cambodian identity, and it’s the main tourism site in the country, with approximately 2 million people a year visiting. That’s a good and a bad thing of course. Great for Cambodia, but bad for someone trying to experience the site and not a thousand people trying to take the perfect Instagram photo.

Jayavarman II and the Rise of Angkor

Taking in the sheer size of Angkor is mind-blowing. It was about 400 square miles, making it 30% larger than the five boroughs of New York City, and nearly double the size of the city of Chicago. Drew told me that we don’t have an exact time for when the city was founded because often cities would be settled, then they would be abandoned or changed or another city would arise on top of it.

But the first major ruler that we know of, who really started the Khmer Empire was Jayavarman II in about 802. Jayavarman oversaw the building of what we understand as Angkor, with the houses and palaces being built of wood, but the temples being built out of stone. In fact, the Khmer people used more stone for the temples of Angkor than the Egyptians used for the pyramids. So historians are now left with only the temples surviving the humid jungle climate.

The Preservation of Angkor

Drew is full of good stories about the early days of Angkor (including one about a young prince leading a battle atop the head of a war elephant). But what’s perhaps so fascinating about Angkor in the broad picture is that it was, culturally, as advanced and beautiful as any of the “great cultures” we study and celebrate every day. The only difference is that it was in the jungle.

So while we may become invested in the Anglo-Saxons, or know so much about the desert cultures of the Middle East, really what it comes down to is that they had different weather, and the jungles of Cambodia were not conducive to preservation. But luckily, Angkor Wat, built by the elephant-riding king, Suryavarman I, has been preserved.

Jayavarman VII and the Rise and Fall of the Khmer Empire

While Jayavarman II may have founded Angkor, it was Jayavarman VII who really helped build many of the beautiful temples and structures of the city. Many of these included depictions of his face, 216 according to Drew, but that doesn’t diminish the beauty of the temples. But soon after Jayavarman VII, as Drew put it, “the whole thing collapses.”

War with Thailand decimates the city, Buddhism rises to lead to less deference to authority, and climate change alters the environment of Angkor drastically. From there, it’s a more modern history of colonization, and of course the troubled rule of the Khmer Rouge. Angkor is a fascinating, beautiful place, and one whose history, even with so much of it lost, connects with our current times, as this conversation shows.

Pin This For Your Trip to Cambodia