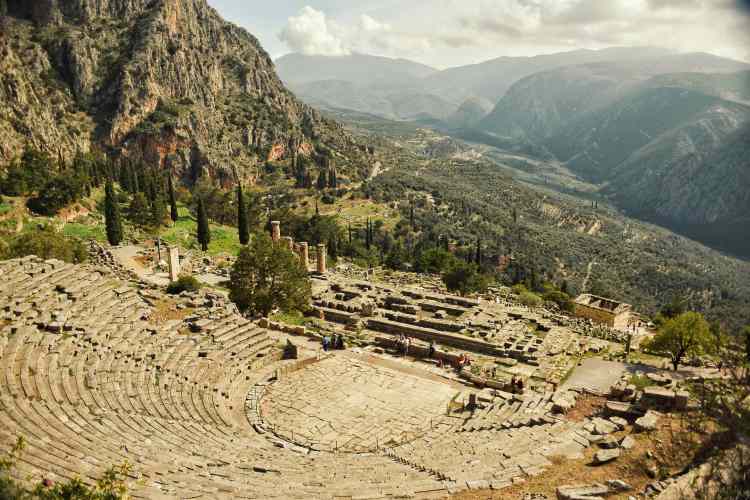 Listen to the Episode “The Oracle of Delphi”

Visiting Greece can be overwhelming, with the number of historical landmarks to visit. But the Oracle of Delphi, high up in the mountains, is one of the most beautiful, and most memorable, places to visit. The history of the site is enthralling, the views are enchanting, and everywhere you look, you see echoes of why the Greeks thought this was the home of a god. My guest today is Ryan Stitt of The History of Ancient Greece podcast. Ryan and I chat about what the Greeks actually did when they visited the Oracle, and the role it played in the rise and fall of famous Greek leaders and states.

[bctt tweet=”On this week’s episode, we chat with @greekhistorypod about the Oracle of Delphi.  via=”no”]

People had been around Delphi since the Bronze Age, but in the 8th century, people begin to flock to it and treat it as a religious sanctuary. And as more temples were built, the town became even more of a destination, so much so that by the 6th-century visitors had begun to arrive from other countries, including Rome. The Greek myths hold that Apollo slew the serpent Python at Delphi, and established it as his sanctuary. Delphi was also home of the Omphalos, which is wrapped up in the myth of Cronos devouring his children, vomiting up titans and, well, you should probably just hear Ryan tell the story.

[bctt tweet=”Why was Delphi considered a sacred site? It has something to do with god vomit.” via=”no”]

The women of the Oracle

The Pythia, the women who served as the priestesses at the Oracle of Delphi, took their name from the python Apollo slew. As Ryan tells me in this episode, the women had to be local to Delphi, had to be peasant women, had to have lived a pure life, and had to be older than 50 years old. Once appointed as the priestess, she remained in the position for the rest of her life and had to remain chaste from that point on. To make one of her prophecies, she first had to cleanse herself in a river, then there were the prophecy trappings we think of—burning of leaves, sacrificing of small animals, etc. And then the priestess would sit upon her bronze tripod, and after a visitor asked their question, she would fall into a trance, during which Apollo would speak his divine will to her. And, as Ryan tells me, the spiritual reason this was the place where Apollo spoke might have actually been geological.

[bctt tweet=”On this week’s show, @greekhistorypod tells us about the women who served as the priestesses at the Oracle of Delphi.” via=”no”]

What to see at Delphi

It’s hard to get across just how big Delphi is, and how much there is to see there. As Ryan told me, it took people in the ancient world three days to hike up the mountain to visit the oracle, and the views once they got there remain incredible today. There’s the theater, which is a must-see, the Temple of Athena, and the Sanctuary. But Delphi also began hosting the Pythion games in the 6th century B.C., and the Stadium of Delphi remains one of the best-preserved sites of its kind. It’s clear Ryan loves the history of the games, especially something called pankration, which was a Greek version of mixed martial arts, where the only rule was no eye-gouging. (No one will try to wrestle you if you visit now.)

[bctt tweet=”You may think you’re into MMA, but really, pankration, the sport of #Ancient #Greece, has you beat.” via=”no”]

Ryan and I geek out a bit about how beautiful Delphi truly is. The theater, which is one of the best-preserved sites in Delphi, gives one a view down into most of the town, including the temple, a breathtaking view like nothing you’ll see elsewhere. If you love the rich history of Ancient Greece, the crazy world of Greek mythology, or just visiting some of the most beautiful places on Earth, then Delphi is definitely a must for your travel itinerary. And this episode, with Ryan’s insight into Delphi’s history, is a must-listen.

[bctt tweet=”If you’re into #history, #myths, or just seeing the most beautiful places on Earth, Delphi is a must-see.” username=””]

1 thought on “The Oracle of Delphi”