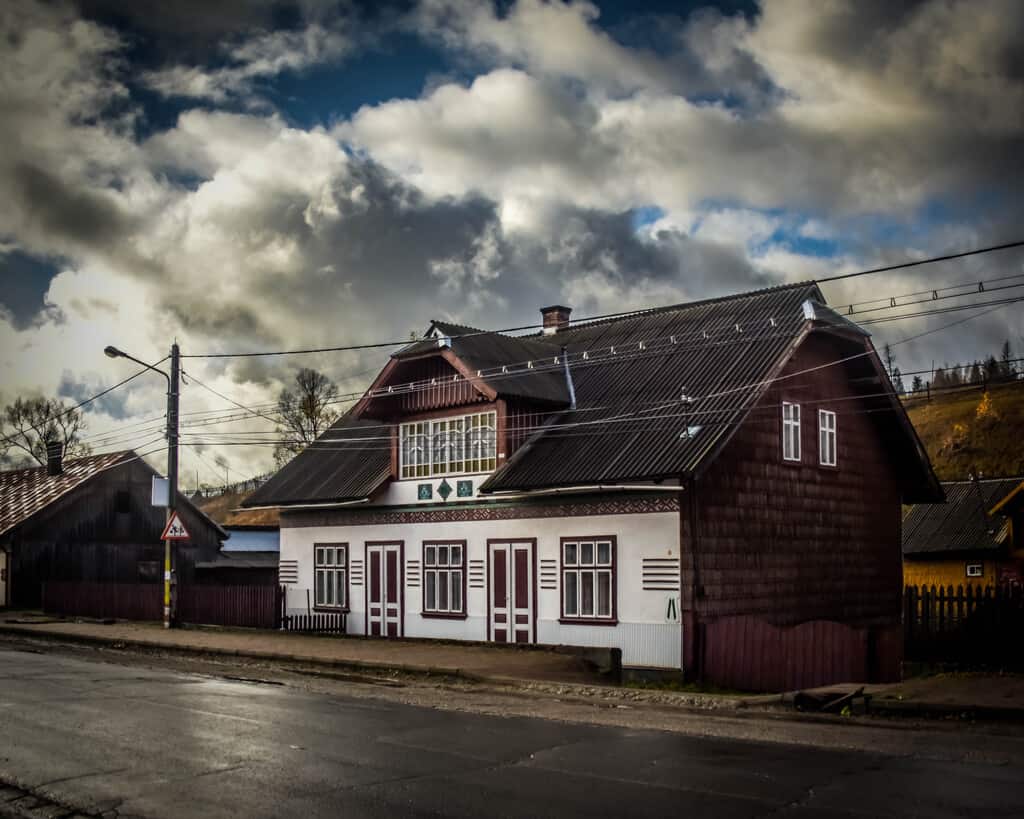 By now it’s well established that I am a sucker for a beautiful monastery (see my posts on Rila, Meteora, and the Medieval Monuments of Kosovo if you need further proof). But the monasteries aren’t the only places in Bucovina with beautiful paint jobs, and there are tons of fun things to do in Bucovina.  T

Full disclosure: I hadn’t heard of Ciocanesti before I got to Romania in October. I hadn’t read that Lonely Planet had proclaimed it one of Europe’s most colorful destinations, nor had I seen this essay on one of my favorite sites, Jungles in Paris, detailing how the tradition of egg painting is handed down in the village.  Because I was traveling as part of the Experience Romania initiative, I trusted my local Romanian guides to show me places I wouldn’t know to seek out on my own. I had a packed, two-week itinerary full of UNESCO sites and famous castles and fortresses, and somehow my eyes had skipped over the note about stopping in this small village on the road from Gura Humorului to Targu Mures.

Unfortunately, I only had an hour in this adorable town, but next time I’m in Bucovina I want to explore it further. It’s one of those traditional European villages that force me to reckon with the fact that Eastern Europe is it’s own crazy, beautiful world, and I am just an outsider who will never truly understand. I love when I come face to face with a place so beautiful and foreign that I have to reevaluate the way I look at the world.

We arrived in the village around 11 am, and we had an hour to explore on our own before getting back on the road. The village was misty-the smoke from the chimneys mingled with the clouds on the hills. The houses and farms curve around the Bistrita Aurie River which bisects the town in an imprecise and whimsical curl. Everything seemed like a fairy tale.

If you’ve spent more than a day in Eastern Europe, you’ve seen a painted egg. These delicate pieces of art are found in almost every civilization, but they’re particularly important to the people of Eastern Europe. Different countries have their own materials, motifs, and techniques. During my two weeks in Romania I visited two separate painted egg museums-two more than I’ve been to in my thirty-three years leading up to my trip. So yeah, I’m up to speed on Romania’s love for their painted eggs.

However, Ciocanesti takes this egg fever to a whole new level:  the houses are painted with their Easter Egg designs and motifs from traditional clothes. And a 2004 law declares that all new houses MUST be painted like this (at the municipality’s expense). The entire town is basically one, big, legally enforced Easter Egg hunt.

For a village so primed for tourism, there is surprisingly little information available about it online.  One of the best sources of information I can find is from Ana, a Romanian reviewing the village on Trip Advisor:

As one starts on the road from Campulung or from Vatra Dornei towards Maramures on the other side of the Eastern Carpathians, the route takes you in both cases through the village of Ciocanesti. It is a village of about 600 houses, all together forming a genuine outdoor museum. The walls of each of them wears traditional motifs of the kind that we find on painted eggs in an array of shapes and colors behind which lies a relatively recent tradition…

But Ciocanesti would have been only a stopover on the route of those continuing their journey to the country of Maramures if, in the 50’s of last century, a housewife hadn’t had an artistic vision that was to kick-start an aesthetic transformation of the village that continues today.

It all started with the clever idea of ​​Leontina Taran, a housewife from the village Ciocanest. Willing to adorn her house, she considered removing some models from her traditional clothes and applying them on the walls by help of the villager painter by the name of Dumitru Tomoioaga. That happened in 1950, and soon Leontina’s house was declared a museum drawing a lot of attention. Other villagers, seeing the success Leontina Taran enjoyed, were quick in mimicking her and they too began to decorate their homes similarly. In time, the local authorities would coordinate all these artworks, financing all the paintings.

In 2004, this beautiful but fairly recent tradition (by Romanian standards anyway) got codified into local law. According to the Romanian Journal:

As it happens, one of painter Tomoioagă’s sons was elected mayor of the village and, due to the high number of Romanian and foreign tourists who had taken the village by storm to admire the captivating houses, the mayor decided that every new built house or revamped one should be garnished with folk motifs outside. And the village mayor’s office is paying for all painting expenses.

Now the village is known for these colorful houses, along with an annual Easter Egg festival and a national trout festival.

The Paintings are Mid-20th Century, but the Village is Much Older

The Ciocănești commune is known as the first inhabited settlement discovered by Moldavia’s founders, starting with Bogdan and Dragoș up to Stephan the Great (Ștefan cel Mare) in the 15th century.

The commune was officially attested in 1440 in ‘a charter that reported that ruler Alexandru cel Bun received Suhard Mountain from his wife Ana, as a ruling beneficence.’

The name of the village Ciocănești comes from the village’s weapon smiths who “were masterly hammering the iron” (to hammer – a ciocăni in Romanian). The weapon smiths around here were also famous for helping Stephan the Great to defend Moldavia from invaders.

What to Do in Ciocanesti

My favorite thing was just strolling around the beautiful town.  The village is spread out, and it would be impossible to get every photograph and appreciate every view in less than two hours. Leaving after one hour was heartbreaking. I keep looking through other people’s photographs and seeing houses that I didn’t see during my visit. Please, give yourself enough time to truly explore!

After you’ve walked the town, stop in the egg museum, called the Muzeul Național al Ouălor Încondeiate (Ciocănești). Finding hours of operation online and in English is difficult. The museum is also a private home. My suggestion would be to have the person you’re staying with or someone at your hostel or hotel call ahead for you and ensure that the museum will be open when you want to be there. The museum is small, so you can see the collection in 20-30 minutes.

If you’re there in April, you can schedule your visit around the annual Easter Egg festival.

You can see a brief snippet of a cow walking through Ciocanesti at the beginning of my video on the Painted Monasteries:

You can also see some amazing footage of the village in this 2015 video from TV Romania:

Pin This for Your Trip to Romania