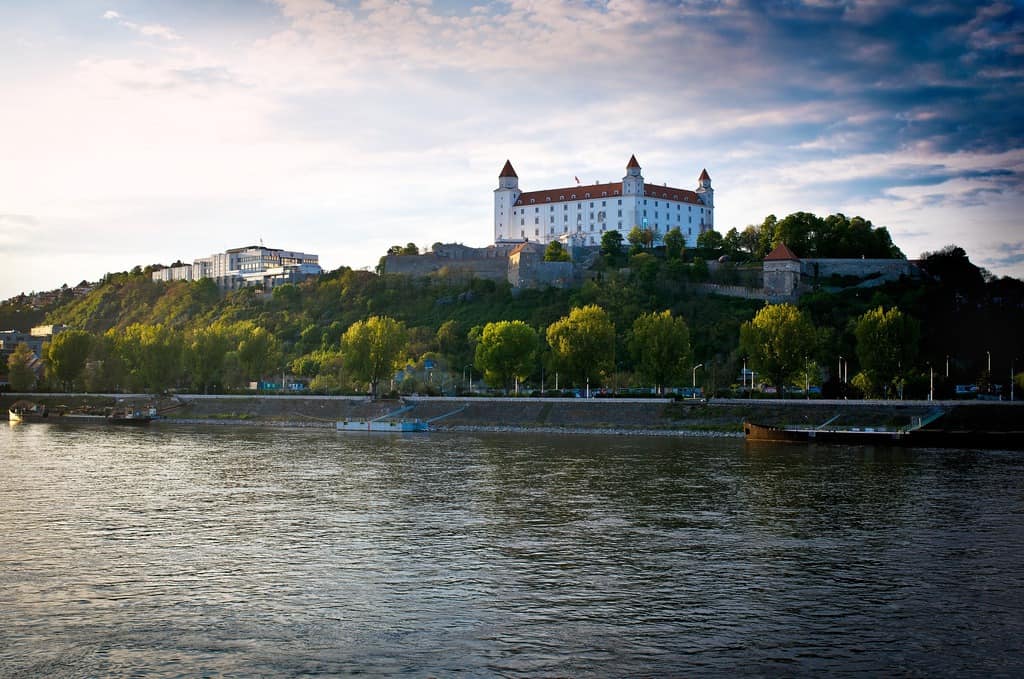 Bratislava and Vienna have more in common for travelers than many might think, but they still are very different cities.

While they both are traditionally seen as geographically “Central European,” Vienna is as east as the west gets, while Bratislava is culturally Slavic and Eastern European.

So if you’re wondering whether you should plan a trip to Vienna or Bratislava, there’s a lot to consider before making your decision.

In the game of Vienna versus Bratislava, Vienna has a ton going for it, not least is that it’s just simply a more well-known city.

However, it’s fame isn’t its only charm. Here’s how to know if you should pick Vienna over Bratislava.

Vienna has amazing museums, important art movements literally named after the city, and perhaps the most famous (or at least the second most famous) opera house in the world.

If you are an arts and culture traveler, Vienna is a dazzling city, and you could spend weeks here and still not experience everything that the Vienna art scene has to offer.

…You Prefer Palaces to Castles

As a history traveler, I tend to conflate castles, palaces, and impressive fortresses when making lists like this one of the most beautiful castles in the world.

However, they technically are not the same things, and Vienna is a city for palace lovers!

The Hapsburgs wanted to show off their impressive wealth (and power) with a series of stunning palaces.

You can Tour Schoenbrunn, the Hofburg, or the Belvedere. Even if you don’t go inside, it’s impossible to walk the Ringstrasse and not come face to face with Vienna’s palace scene.

…You Travel for Chocolate

Sacher torte, the famous chocolate cake originated by Demmel’s, is a must-try while in Vienna, but you’ll also find the city has excellent hot chocolate (in fact, Viennese hot chocolate is a thing) and candy shops piled high with chocolate treats.

If your love of chocolate borders on obsession, you can add a trip to the Chocolate Museum to your Vienna itinerary.

While I think Bratislava’s Christmas Market is charming, it’s not a destination market the way that Vienna’s Christmas markets are.

The markets in Vienna are some of the best in Europe, and there are so many of them! You can go from market to market in a night or two, or you can spread them out (like I did) over a week or two.

Read next: 40 Magical Things to Do in Vienna in Winter

If you’re interested in red tourism (typically exploring communist sites in post-communist countries), then Bratislava is the city to choose.

Arriving in the city, you’ll be greeted by the affectionately nicknamed “Communist UFO Bridge” (not to be confused with Bulgaria’s own Communist UFO).

Combine that with social realist architecture, concrete block neighborhoods, and the city market, and you have everything a red tourist could ask for in a city.

You’ll learn a lot about the city’s communist past on the city’s free walking tour, but you can go even deeper with specialized communist tours.

…You Prefer Castles to Palaces

While Vienna is where you go for palaces, Bratislava is the city to pick if you want to see a real castle.

Located on a hill above the Danube, Bratislava Castle guards the city, and from here you can see all the way to Hungary (provided the weather is good).

Bratislava’s location (and the castles) is a strategic passageway between the Alps and the Carpathian mountains, and its spot has been inhabited in one way or another since prehistoric times.

Being an American, I do find Europe to lack dishes that contain just a pile of shredded cheese on top.

Europe is great about baking cheese into things or crumbling cheese on top, but America typically wins the battle of the shredded cheese.

So imagine my surprise when I was greeted with Slovakia’s national dish bryndzové pirohy covered in a pile of shredded cheese. And bacon!

The dish is made from potato dumplings (similar to gnocchi), with cheese made from sheep’s milk, bacon, and bits of sausage.

It’s a meal that still haunts my dreams, it was that delicious.

The further east in Europe you go, the lower the prices are.

This is especially true if you travel east from Vienna to Bratislava, since crossing the Iron Curtain means you’re now in a post-Communist country.

This means the economy here is not as robust as in Austria. While both countries use the Euro, you’ll notice your money simply goes further in Bratislava.

The joke is that the Danube isn’t blue like the waltz, it’s actually brown.

Yet the Danube is still an inspiring river, and it’s thrilling to see it for yourself for the first time.

Both cities sit on the Danube, and you can even choose to take a river cruise for the day between the two.

While there’s simply more Austro-Hungarian architecture in Vienna, Bratislava was also part of the empire. Empress Maria Theresa worked on beautifying (and modernizing) the city, and she even had a permanent household here.

Though Bratislava has a smaller core, I found that both cities are fabulous places to stroll and look at pretty buildings.

I visited both cities in December, so I missed out on the luscious gardens. I walked them, but they were wintery brown, not gorgeous green.

However, both cities are known for great parks and river walks if you want to spend some time enjoying nature (provided the weather cooperates).

Finally, both are located within a few hours of amazing places to hike and get out into the mountains.

…Seeing the Transition Between Eastern and Western Europe

No, Austria wasn’t part of the Eastern Block, but it was part of the occupied Third Reich.

Both Austria and Vienna have sins to grapple with from World War II, and the different trajectories they went on after the war had more to do with which side of the Iron Curtain they ended up on.

Vienna is where Western Europe ends, and Bratislava is where Eastern Europe begins. You can see this transition on both sides of the river.

If Vienna is the city for you, here are my resources to plan your trip. First, here’s my Austria packing list so you know what to bring with you regardless of which season you travel in.

Next, check out my guide to visiting Schoenbrunn Palace and taking a day trip from Vienna to Bratislava.

Love to listen while you plan your travels? Here’s my podcast episode about Vienna, plus all the best travel podcasts I use to plan my own trips.

Intrigued by Bratislava? First, check out my post on Red Tourism etiquette so you can have all your communism tourism questions answered.

I’m in the process of creating resources on Bratislava, but for now, you can use my Austria packing list and my guide to planning a day trip from Vienna to Bratislava as good places to start.