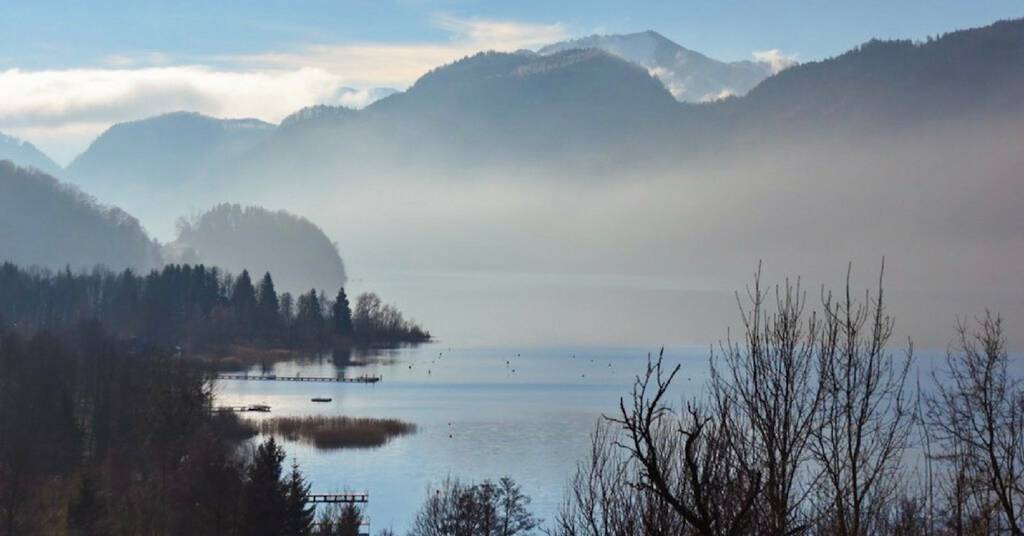 Never heard of the Hallstatt-Dachstein / Salzkammergut Cultural Landscape? How about the much friendlier and more marketable Austrian Lake District? Still no? Don’t worry-I hadn’t either.

If the number of times I played the Sound of Music soundtrack on Spotify is any indicator, by the end of my trip one fantasy had slightly edged out the other. So when I booked a bus tour to Salzburg at the last minute, I didn’t have any options. I just grabbed the only one that fit my schedule and considered myself lucky that I could make it work at all. Day of, with my iPhone fully charged and Spotify blasting in my headphones, I jumped on the tour bus full of enthusiasm and sans knowledge of our full itinerary. For those who’ve gone on a day tour, you’ve probably run into this situation before: unexpected breaks at small points of interest and fancy restaurants to make the tour more valuable and keep the driver from working too many hours without a break. In Greece, this meant a stop at the Corinth Canal on the road to Epidaurus, and in Mexico, it meant seeing divers in the Cenote coming back from Chichen Itza.

On my bus tour to Salzburg, it meant two things:

Sadly, we only stopped for a half hour, just long enough to take pictures and drool.  Not nearly enough to explore this magnificent place and try all of Hallstatt’s activities. In the intervening months, the beauty of this place has haunted my dreams.

(For those not super familiar with UNESCO sites and why they’re awesome, check out Gary Ardnt’s page on World Heritage Sites).

The city of Salzburg is…drumroll, please…a city built on a salt empire. Salzburg literally means “salt fortress” or “salt castle.” (It’s NOT named for how salty those nuns got while singing about Maria, FYI). This salt is the same reason that the Hallstatt-Dachstein / Salzkammergut Cultural Landscape became important originally.  The Salzkammergut is in the area around Salzburg. Early Europeans have been there since as early as 2000 BCE mining and using the area’s natural salt.

Let’s break it down:

Hallstatt: A small town in the Salzkammergut region of the Alps, marked most notably by THAT adorable church. (You’ve seen it before, trust me). It’s also the name of the lake the town is on. Can also refer to the region.

Dachstein: The name for an alpine glacier in the region and a section of the alps.

Salzkammergut: A region of Austria east of Salzburg. The name means “Estate of the Salt Chamber.” Contains 52 municipalities.

Cultural Landscape: The UNESCO site comprises both the human cultural aspects as well as the geological features.

Not so hard, right?

The Hallstatt-Dachstein alpine landscape, part of the Salzkammergut, and thus of the Eastern Alps, is one of visual drama with huge mountains rising abruptly form narrow valleys. Its prosperity since mediaeval times has been based on salt mining, focused on the town of Hallstatt, a name meaning salt settlement that testifies to its primary function.

Systematic salt production was being carried out in the region as early as the Middle Bronze Age, (the late 2nd millennium BC), when natural brine was captured in vessels and evaporated. Underground mining for salt began at the end of the late Bronze Age and resumed in the 8th century BC when archaeological evidence ows a flourishing, stratified and highly organised Iron Age society with wide trade links across Europe and now known as the Hallstatt Culture. Salt mining continued in Roman times and was then revived in the 14th century. The large amounts of timber needed for the mines and for evaporating the salt where extracted from the extensive upland forests, which since the 16th century were controlled and managed directly by the Austrian Crown. The Town of Hallstatt was re-built in late Baroque style after a fire in 1750 destroyed the timber buildings.

Since the site is a region and not a specific building or place, there are tons of options for visiting. It’s one of Austria’s most famous places to ski, and the winter sports here are renowned. The area is known for all kinds of wonderful outside activities in all seasons. Head towards Salzburg, but give yourself more than 30 minutes to explore the neighboring region. Otherwise, you’ll be full of regret, like a certain travel blogger I know.