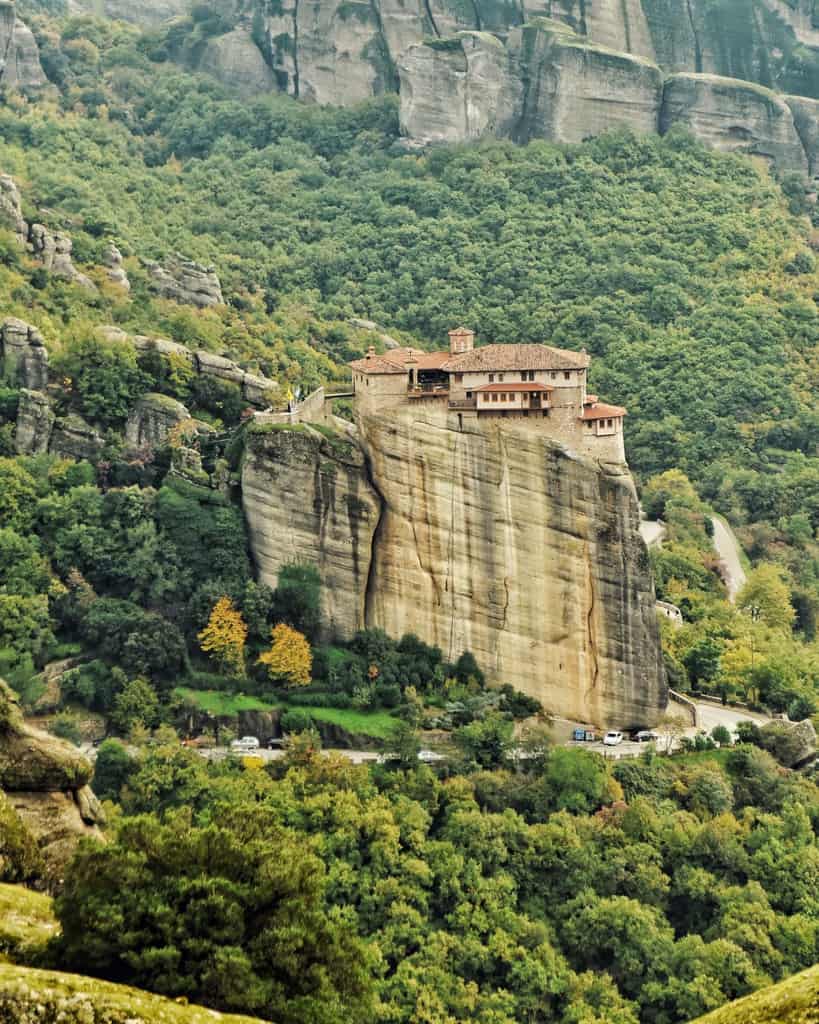 Seeing Meteora, that was the main reason I chose to go to Greece. Yes, I wanted to see the Acropolis and some islands and connect with the beginnings of democracy and philosophy.

But really, I wanted to feast my eyes on the beautiful monasteries built atop rocks that seem to be suspended in the air. So even though it was a crazy long day, it was the best thing I did the whole month.

My day started the night before, with a crazy bought of insomnia. I got zero minutes of sleep even though I was looking forward to this tour the most. Just great.

The day consisted of driving through the landscape, touring monasteries, and stopping to take pictures.

I’ve seen so many beautiful Byzantine churches and art in the last two months, so I’m a little embarassed to say that the gorgeous paintings didn’t move me as much as I expected. I’ve been completely spoiled in this department, especially by the churches in Troodos and Nicosia.

So while the church artwork is amazing, I was so much more excited about the architecture and outdoor surroundings that I decided to dedicate the bulk of my time to wandering the monasteries’ grounds. I did sneak a pic of my favorite mural:

There were a few visitors there, even in late October. Meteora gets 3k+ visitors per day, so if you want to feel alone, bring headphones and sunglasses. That works for me every time.

We stopped at the Great Meteoron Monastery first. After climbing the 300 steps, I paused in the church before spending some time walking around/fighting the crowd of selfie takers for a share of the view. This was the peak of crowds during my time there.

I stopped briefly in the museum before heading back to our group’s meeting place. Afterwards, we did a photography stop, where we could see five of the six monasteries.

Our tour guide pointed out all the monasteries and which ones were homes for monks and which were nuns.

We also saw two rocks that were CGIed into an episode of Game of Thrones.

Afterwards, we stopped to photograph the monastery that was used in the James Bond movie For Your Eyes Only, which the tour guide credited as putting Meteora on the tourism map. It’s such a beautiful place, it’s no wonder why Hollywood keeps using the rocks.

Then we headed to St. Stephens, which is one of the monasteries run by nuns. This was closer to the end of the day, and the crowds had thinned out.

There weren’t many steps, maybe only twenty or so. This was nice, but also felt less special, somehow. Like you didn’t have to earn it.

Afterwards, the tour company dropped me back off at the train station.

The monasteries were built on top of giant sandstone pillar rocks. For such an awe-inspiring place, the UNESCO website is shockingly brief.

See also
The Acropolis and the Golden Age of Athens

In a region of almost inaccessible sandstone peaks, monks settled on these ‘columns of the sky’ from the 11th century onwards. Twenty-four of these monasteries were built, despite incredible difficulties, at the time of the great revival of the eremetic ideal in the 15th century. Their 16th-century frescoes mark a key stage in the development of post-Byzantine painting.

This website has a better description of the landscape and the history of the monasteries.

Getting from Athens to Meteora and back in one day is not the most sensical thing. Because I travel with my dog, I think it’s really important to stay in places longer and I never take overnight trips where she has to be alone. Since the choice was do an overnight trip to Meteora or squeeze it into one day, I had to squeeze it in. For me, that was the only logical choice, but most people will not do Meteora as a day trip.

I took the train from Athens to Kalabaka (the official town name of Meteora), where the tour company picked up me and the other members of my group. The train was five hours there and six hours back. Other options would be to rent a car, which would take about the same amount of time.

I went with a tour company that took us to two of the monasteries and showed us the other four. We had time to explore the ones we visited, and we also did two photography stops in between. I don’t promote individual tour companies, but I loved our tour guide. I went on 5 organized tours in Greece, and this chick was the best guide.

When we got to the monasteries, the entry fee was €3 at each one.

They have a strict dress code. If you travel a lot, you’re probably familiar with rules for going into mosques and churches. This went even further. If you’re a chick, you can’t wear pants. PANTS. They have wraps you can borrow to put over your pants if you forget. As a curvy chick though, I carefully curate my travel wardrobe to keep from feeling frumpy. I would not have felt comfortable in the wraps-I would have felt like a cow. I’m happy I knew the rules ahead of time to wear a dress.

Sometimes places aren’t as good in real life as the picture you have in your head or the postcard your friend sent you. This is not one of those places. I was in awe nearly constantly. If you ever get the chance to go, don’t miss it!