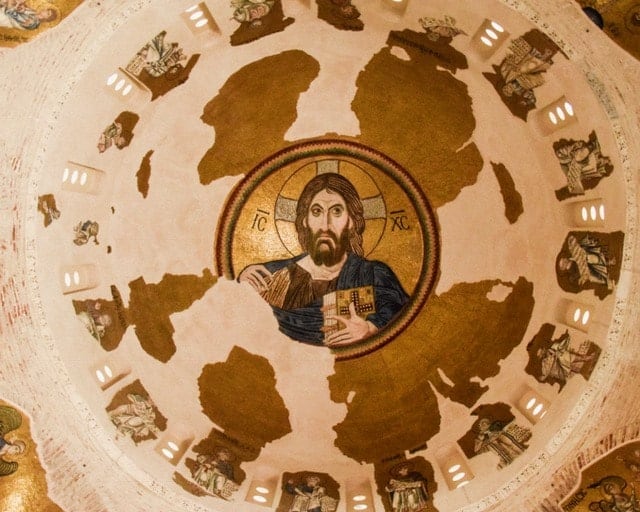 This site consists of 3 monasteries located in different parts of Greece. I visited Daphni Monastery, which is on the outskirts of Athens.

My trip to Daphni Monastery was simple and without fanfare. I only learned that this was a UNESCO site and close enough to Athens to visit on my own when my bus tour to Mycenae drove by. The tour guide pointed it out, acting like no one would ever want to get out and see it. It was weird.

I went back on my own. I looked around for about 30 minutes. As opposed to the other Greek UNESCO sites I saw, this one was never mentioned in tourist guides and there were only five other visitors during my time there. I walked through the courtyard, explored the church, and visited the (extremely) small museum.

The current version of Daphni Monastery was built in the 11th century, on top of a Greek temple and earlier 6th century monastery. From the Ministry of Culture:

The Daphni Monastery is built on the site of the ancient sanctuary of Apollo Daphnaios which was destroyed during the invasion of the Goths in 395 A.D. Of the old temple only one Ionic column still remains in the colonnade of the narthex, while the rest were removed by Lord Elgin in the 19th century. The monastery, dedicated to the Dormition of the Virgin, was founded in the 6th century A.D. and in spite of its great wealth and fame, it was abandoned

The second phase, dated to the end of the 11th century (around 1080), is the one preserved. The catholicon is a crossin-square church of the octagonal type, surmounted by a broad and high dome. It has a narthex, formed as an open portico in which the Ionic columns of the ancient temple of Apollo were built.

Although geographically distant from each other, these three monasteries (the first is in Attica, near Athens, the second in Phocida near Delphi, and the third on an island in the Aegean Sea, near Asia Minor) belong to the same typological series and share the same aesthetic characteristics. The churches are built on a cross-in-square plan with a large dome supported by squinches defining an octagonal space. In the 11th and 12th centuries they were decorated with superb marble works as well as mosaics on a gold background, all characteristic of the ‘second golden age of Byzantine art’.

There was a public transportation option, but I decided to take an Uber from my apartment. He waited for me while I went inside and then dropped me off at the archeology museum when we were done. The Uber was 18 euros one way and 10 on the way back.

See also
The Acropolis and the Golden Age of Athens

There is no entrance fee. The monastery is open to the public on Tuesdays and Fridays from 8am to 3pm. Check the website’s hours before making the trip out there.

Explore the church and walk through the small museum. Unless you’re a mosaic or architecture scholar, I don’t know how you’d spend more than 30 minutes there.