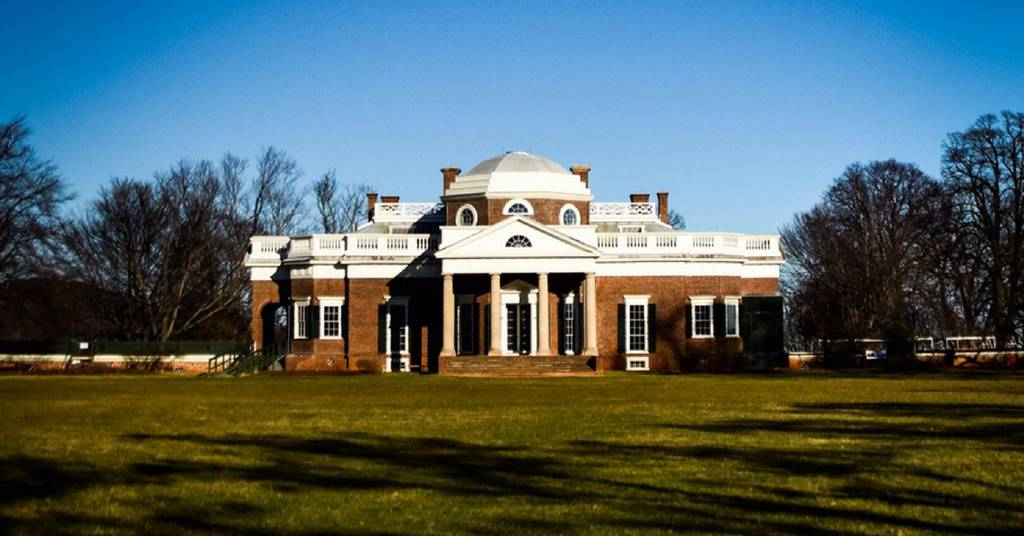 Sometimes travel is heavy. There are places that make you think, make you cry, change the way you perceive the world or yourself. When you go to the Anne Frank House in Amsterdam, you know you’re going to cry. There’s a room at the end of the tour, where you process what you saw and everyone around you is crying. I didn’t cry at Monticello, but I had tears in the back of my eyes. I do now too, thinking about it and re-reading the literature for this post.

I put Monticello on my itinerary because it hit the perfect sweet spot between fitting into my January mini-theme and it happened to be on the way to somewhere else. I had this American history thing going on–a natural byproduct of traveling the east coast and knowing that I was going to be seeing Hamilton at the end of the month. Combine that with Inauguration, and thinking about the grand sweep of American history was basically inevitable.  Combining Monticello with Independence Hall and the Statue of Liberty, I ended up going to a very patriotic trio of UNESCO sites in January.

This one was the hardest though. When I left the site, I felt weighed down with Monticello’s legacy, and, in the month since my visit, I still can’t grapple with my thoughts in a precise manner.  This is a case where I have to hold so many view and pieces of information in my mind at once. They don’t coalesce. They don’t make up one greater truth. One half of the facts doesn’t make dealing with the other half easier. They just all exist at once.

In the most elementary way I can think, it’s hard to keep these six facts in my head at the same time:

There are a lot of places is the country where you can celebrate Thomas Jefferson’s legacy as politician, champion of freedom, and enlightenment thinker. But Monticello is a weird place to do that. Yes, you’re surrounded by his inventions you can see the inner-workings of his mind laid out in the way he arranged his home. But you see the vast fields that would have been full of slaves working in the day. You can see the tunnels they used to serve meals, and see how some of Jefferson’s eccentricities made their work harder.

It’s impossible to distance yourself from Jefferson, the slave-owner, when you’re studying his daily life and the way he lived.

I think UNESCO chickened out. When they selected Monticello and UVA, they did so as great works of architecture from a great American thinker. This allowed them to skip over dealing with the legacy of slavery. The Thomas Jefferson Foundation, who maintains the house, does not. During my tour, I found my guide did a great job balancing Jefferson’s legacy with the realities of life on the plantation. In addition, they have a separate Sally Hemmings tour and they created an app that covers slavery at Monticello. The foundation continues to focus much of their research on the black families that lived there.

Monticello was the plantation home of Thomas Jefferson (1743–1826), author of the American Declaration of Independence and third President of the United States. He designed both the plantation home (1769–1809) and his ideal Academical Village (1817–28) situated eight km away in Charlottesville, in central Virginia. The Academical Village still forms the heart of the University of Virginia, and exhibits a unique U-shaped plan dominated by the Rotunda with pavilions, hotels, student rooms, and gardens arrayed in rows to its south. The buildings are excellent and highly personalized examples of Neoclassicism, shown in their relationship to the natural setting and their blending of functionalism and symbolism. They were inspired by deep study of classical and contemporary examples and reflect Jefferson’s aspirations for the character of the new American republic. Both works have drawn international attention from the time of their construction.

Jefferson’s Monticello and his Academical Village precinct are notable for the originality of their plans and designs and for the refinement of their proportions and décor. His house at Monticello, with its dome, porticos supported by Doric columns, and cornices and friezes derived from classical Roman buildings, and his Academical Village, with its Rotunda modeled on the Pantheon and its ten pavilions each offering a different lesson in the classical orders and architecture as drawn from published classical models, together invoke the ideals of ancient Rome regarding freedom, nobility, self-determination, and prosperity linked to education and agricultural values.

I’ve quoted their entire description, because I think it’s important to see how they glorify Jefferson as a thinker and architect, but neglect to discuss what the place actually is. It is actually a plantation. It was run by hundreds of slaves. A lot of what we know about how plantations ran comes from the work done by the foundation and Jefferson’s writing. Leaving out the other half of Monticello’s legacy is irresponsible.  How can UNESCO honor the architect, but leave out the purpose of the structures?

I drove there, but I saw tour bus companies as well. Charlottesville, Va is a weird place to travel without a car, but in a pinch you could use Uber to get from where you’re staying to the plantation.

Tickets were pricey, but they include the tour and museum. You can get a discount by purchasing on their website ahead of time. If you want to do a special tour of the upstairs, the Sally Hemmings tour, or a family friendly version, book ahead because those sell out.